In India, Medical Treatment and Justice Remain Elusive for One Survivor of Domestic Violence 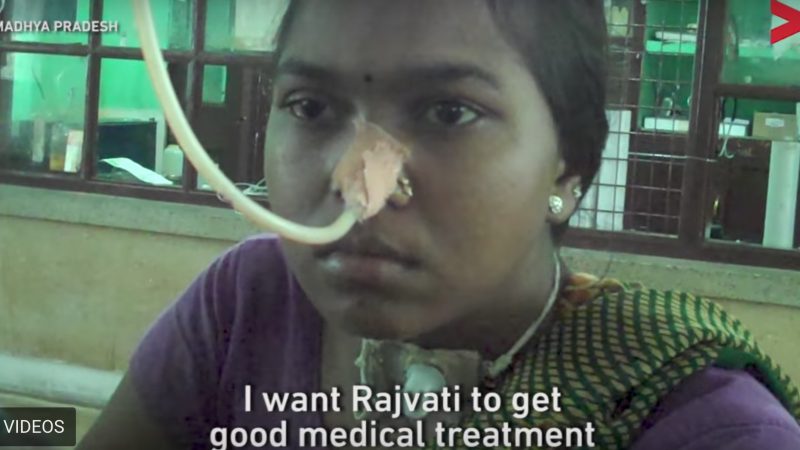 This post was written by Srishti Malhotra and Madhura Chakraborty and originally appeared on Video Volunteers, an award-winning international community media organization based in India. An edited version is published below as part of a content-sharing agreement.

The Protection of Women from Domestic Violence Act was passed in India in 2005 to ensure the safety of women against domestic violence. However, a decade later women like Rajvati, from Singoli village in the central Indian state of Maddhya Pradesh, remain without justice. In August 2016, the 22-year-old mother of a 2-month-old infant was attacked by her husband with an axe. The resulting injuries included a severed vocal chord, and she remains without the ability to speak because the nearby government hospital does not have adequate medical facilities to operate on her.

“My daughter, Rajvati, had told me her husband and in-laws were harassing her for dowry,” her mother Chidilal Satnami recalls. “When she tried to reason with them, saying that I [Chidilal] will not be able to arrange for the money because of my disability, they reprimanded her and asked her to meet their demands by any means possible.”

Rajvati was married to Ramesh Choudhary in June 2015. It was difficult for Rajvati’s disabled, unemployed father to arrange for the marriage and dowry, but he managed somehow. Soon after marriage, Rajvati’s husband and in-laws demanded more dowry to buy him a motorcycle. Rajvati knew this would not be possible. Her marital relationship worsened and her husband began to accuse her of having an extramarital affair with his brother, her brother-in-law. In the midst of this, Rajvati gave birth to a son in June 2016.

But the situation did not improve, and violence would soon change Rajvati's life forever. Video Volunteers community correspondent Rekha Bhangre from Seoni district in Madhya Pradesh met with Rajvati and her family in September 2016 to talk about her experience:

Seeing Rajvati chatting with her brother-in-law, Ramesh attacked her with an axe in a fit of jealous rage. She sustained fractures and nerve damage, and her voice box was completely severed. A police case was filed and Ramesh was arrested immediately. So grave were Rajvati’s injuries that she had to be rushed to the government hospital in Jabalpur 154 kilometres away. As Ramesh and his family refused to bear any of the expenses for her treatment, Rajvati’s family had no option but to stay at the government hospital for treatment, despite the lack of adequate infrastructure. Since the attack, Rajvati’s in-laws have prevented Rajvati from seeing her infant son.

Rajvati’s story is unfortunately not exceptional (see past Video Volunteers reports). As of 2015 Madhya Pradesh registered the third highest number of domestic violence cases in India, according to National Crime Records Bureau data. Furthermore, the data reveals that crimes against women have an appalling conviction rate of under 22%. The Protection of Women from Domestic Violence Act has been praised for its comprehensive approach to the issue, with provisions of shelter and guarantees of the right of residence and compensation for the survivor. And yet, implementation is lagging, as Rajvati’s case amply demonstrates.

For instance, in Rajvati’s case, she was in the Jabalpur Hospital and Research Centre for months. So long and slow is the legal process, that she has yet to receive any compensation. Her father had to fund her treatment by taking out loans. Though her husband was imprisoned the day after the incident and remains in jail, the court hearing against him has still not begun. Although Rajvati is unable to speak, she has given a written statement affirming that her husband had demanded 50,000 rupees from her parents to buy a motorcycle. He had threatened to kill her if she failed to give him the money.

Not much has changed since the time the video report above was shot in September 2016. Though Rajvati was recently released from the hospital and returned to her home in Singoli village, she is unable to speak and has difficulty eating. She has to go to Jabalpur for check-ups twice a week. The Jabalpur Hospital authorities have told her that they are awaiting equipment that will enable them to operate on her larynx. Her son will be turning 1 year old soon, but continues to live away from her, at her in-laws’ home. Nor is she financially or physically capable of caring for him at present.

Video Volunteers’ community correspondents come from marginalized communities in India and produce videos on unreported stories. These stories are “news by those who live it.” They offer hyperlocal context to coverage of global human rights and development challenges. If you think you can help Rajvati in her struggle to live with dignity and recover from this horrific ordeal please get in touch with Video Volunteers at info@videovolunteers (dot) org.