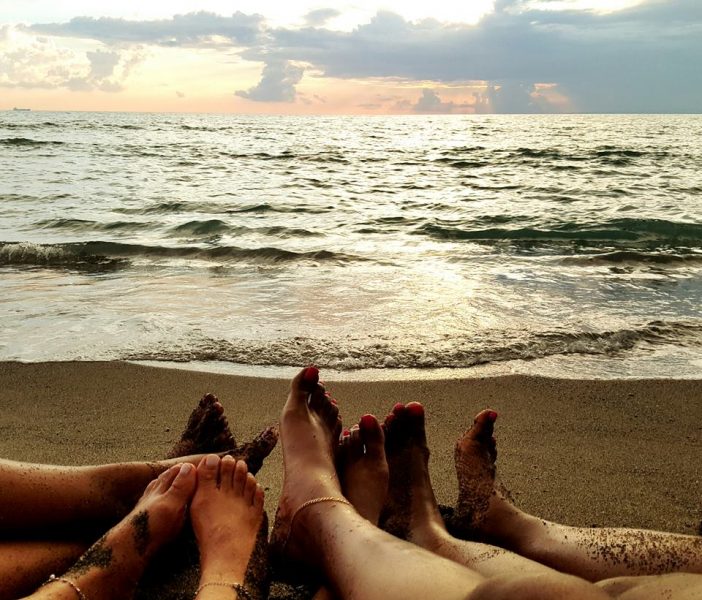 Facebook also has increasingly become a space where users document their experiences of such incidents firsthand. This too can carry consequences, especially for women.

One recent example surfaced this week when Varsha Dongre, an Indian Civil Service officer and deputy superintendent of Raipur jail was suspended and transferred to a remote prison (350km away from her current post) for speaking about human rights violations against indigenous Adivasi girls on Facebook. In the post she wrote:

I have seen 14-16-year-old Adivasi girls being stripped naked in police stations and tortured. They were given electric shocks on their wrists and breasts. I have seen the marks. It horrified me. Why did they use third degree torture on minors?

The order calling for her suspension alleges that she made irresponsible statements, cited “false facts” and went off duty without approval. The Indian government has come under harsh criticism from international human rights watch organisations for torture and abuse by the Indian police against Adivasi women. This has come as part of a broader crackdown on indigenous groups and their efforts to resist deforestation of their indigenous land.

Another recent example saw Jamaican activist Latoya Nugent charged under Jamaica’s Cybercrime Law, after she publicly named (on social media) alleged perpetrators of sexual violence. Nugent is part of the Tambourine Army, a group of women and survivors of sexual violence who are using the internet to share their experiences online. The public prosecutor dropped all charges filed against Nugent on May 17.

Social media activist and opposition campaigner Yonatan Tesfaye was sentenced to six years in prison on May 24 after spending over a year in jail in Addis Ababa awaiting trial. The primary evidence against Tesfaye, who was convicted of violating the country’s notorious Anti-Terrorism Proclamation, came in the form of several Facebook posts which the court said amounted to incitement to violence amid the ongoing land rights movement that has seen several hundred protesters killed by Ethiopian police. The screenshot below comes from an English translation (by the Ethiopian Human Rights Project) of the charges filed against Tesfaye. The Facebook post quoted here is one of several that was presented in the filing: 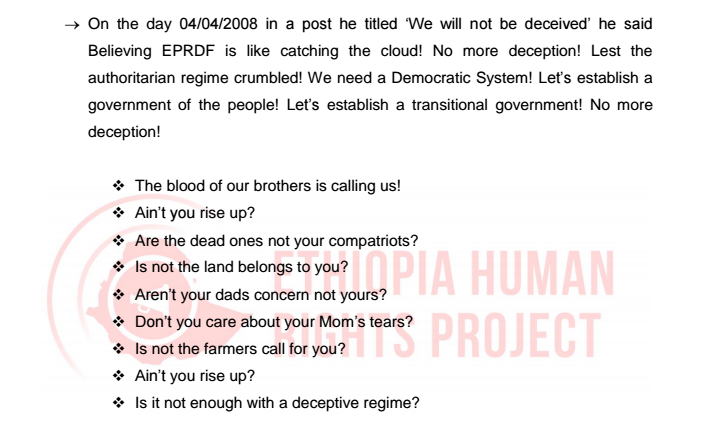 The heads of two independent media sites in Malaysia, KiniTV and Malaysiakini, are facing cybercrime charges for posting a video of a politician criticizing the attorney general. The video was posted last year, and features a politician criticizing the office of the attorney general for failing to identify the role of the prime minister in a corruption scandal around 1MDB, a state-owned investment bank. They face a court hearing on June 15. If found guilty they may face prison terms of up to one year and fines of 50,000 Malaysian Ringgit (around US$11,500). Malaysian officials suspended the licenses of several news outlets for reporting on the 1MDB scandal, in which the prime minister is accused of embezzling $700 million through the bank.

Azerbaijan blocked five independent media outlets, including three online news sites and two satellite TV stations, claiming they “pose a threat” to Azerbaijan’s national security by showing content that purportedly promotes violence and hatred, and violates privacy. Recent coverage by the outlets includes stories about public protests, suicide rates in Azerbaijan and the financial dealings of the private foundation of Vice President Aliyeva, who is also the First Lady. The order also establishes grounds to prosecute employees of these news outlets.

Thai authorities have been at odds with Facebook in recent weeks concerning more than 300 pieces of content on the network that officials say are insulting to the Thai king, and thus violate the country’s notoriously harsh lese-majeste law. Last month, they advised Facebook users to unfollow three prominent writers who were known for their critiques of the king. Now, according to the Bangkok Post, they plan to target even those users who merely view content of this nature. Thailand’s Central Investigation Bureau told the Post that the move was “triggered by police limitations in tracking down producers of illegal content posted on social media outlets such as Facebook and YouTube.”

On May 24, a Colombian court acquitted biologist Diego Gomez of copyright infringement charges in a case that hit a nerve among digital rights advocates across the Americas. A fellow student sued Gomez in 2013 for posting his Master’s thesis on the document-sharing website Scribd. Despite the fact that Gomez intended only to share the paper’s findings with his classmates, and that he earned no profit in doing so, the now 29-year-old could have faced a maximum sentence of eight years in prison.

The lawsuit proceeded thanks minimal legal protections for educational use of copyrighted material in Colombia. Copyright laws in Colombia were reformed in 2007 at the behest of the United States, as part of the two countries’ free trade agreement.

A local social network called KashBook has spiked in popularity in the Kashmir Valley where the Indian government has banned dozens of social networks, including Facebook. Developed by 16-year-old Zeyan Shafiq, who described KashBook as “the answer to social media gag”, the website launched in 2013, but is enjoying a renaissance in the absence of other platforms. The website has been blacklisted in Kashmir on a few occasions, prompting Shafiq and his business partner Uzair Jan to transfer the site to a new server, a fix that at least temporarily allows users to regain access.