Is the Belt and Road Project the Answer to China's Economic Woes? Some Aren't So Sure. 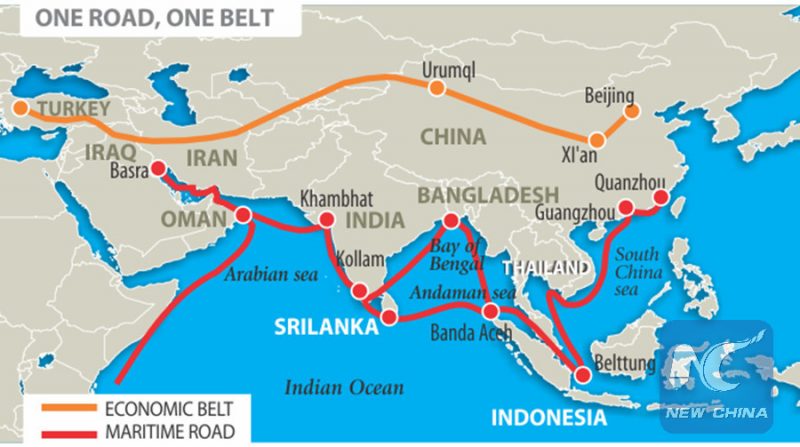 China caught the world’s eyes with its high-profile global forum on the so-called Belt and Road Initiative in Beijing on 14-15 May 2017. The developmental blueprint, involving about 65 countries, seeks to push through a series of infrastructure and trade projects that boost global economic growth and connect the Asian, African and European continents.

Chinese President Xi Jinping pledged US $124 billion during the forum to establish China’s leading role in this new globalization effort.

Despite being touted by Chinese news outlets, following the forum censors began to block Chinese from commenting about the initiative on social media. A number of users had been expressing their skepticism about the gigantic international project at a time when China’s economy is struggling with overcapacity, soaring home prices, and inflated credit. 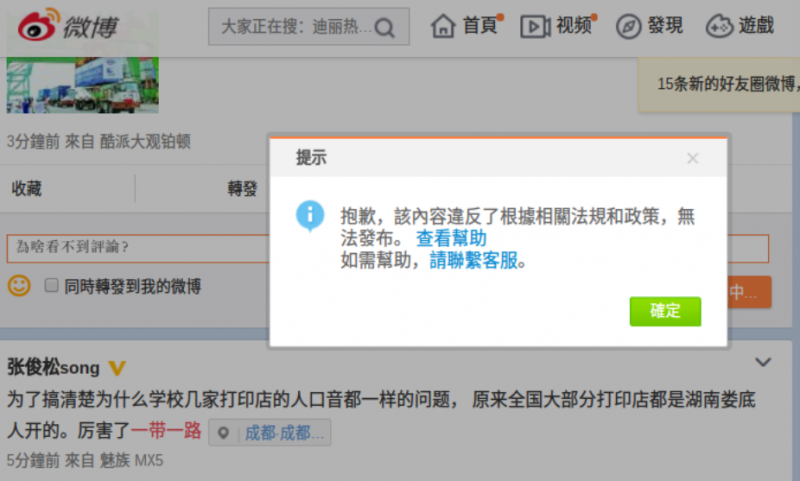 Screen capture from Weibo on 22 May 2017. When posting comment on news about Belt and Road on Weibo, a warning stating that the comment is violating regulations and policies pops up.

Skepticism aside, many Chinese bloggers did discuss the initiative in a positive manner. For example, “Lucky Star No. 1”, writing on the online forum Tianya, explained in simple language how China could reset the global economic order and become a boss with the Belt and Road project (also called “One Belt, One Road”):

The core of “One Belt, One Road” is to invest in the infrastructure of surrounding countries and turn them into suppliers of raw material and markets of our products. There's huge economic gain generated from this leading role in the project and a reasonable return from the investment.

We can see that the investment is huge, the risk is huge, and the return is super huge. Only a super strong economic entity (a necessary condition) equipped with political and military power can take up the initiative. If you don’t have the economic power, the initial investment would drag you down…Likewise, if you don’t have political and military strength, and your fist is not hard enough, you can’t take up the project. History has proven that only the strong country has “friends”. If you are weak, someone can take over.

The strategy is to turn oneself into the boss of the global village rather than the worker.

While many Tianya forum users echoed the above dream of surpassing the US and Europe in the global economic order through the Belt and Road Initiative, some in the comment thread pointed to the unresolved economic at home. In the course of writing this post, the comment thread was made inaccessible to unregistered members, in perhaps a sign of how sensitive the topic is.

We haven’t solved the problems in China’s manufacturing sector. All the money is trapped in the property market, and the upgrading of industry is going slow. Overseas developmental projects cannot solve the problem of domestic unemployment, please don’t keep boasting. Why does the US have to reduce taxes and develop a manufacturing sector? Are they fools? They are a step ahead. What we should be fearful of is that your competitor is stronger and works harder than you are.

Money has been frozen in the stock market, in the property market, ordinary people’s money is frozen and where else is the money for One Bell One Road coming from? Has the promise for free yuan exchange been fulfilled? If it keeps printing out money, how can free flow of yuan be possible?

China’s economy is now “L-shaped”, the major reason is that its hasn’t upgraded its industries…

The only road leading to the fulfillment of the China's dream is industrial upgrading, focusing on advanced technological products so that we can step out of the vicious circle of high energy consumption, serious pollution, and low return rate.

Unfortunately, we are still taking the path of infrastructure investment. Infrastructure development is saturated, resulting in rocket high debt domestically, then we draw a circle outside the country to export concrete [for construction]. Let’s not talking about the risk in investment, can we evolve into an advanced country with construction projects? … The most likely result of overseas construction investment in infrastructure is that — the project has empowered them to compete in the low-end manufacturing market. Those countries are poor and they have abundant labor. For example, Vietnam and Indonesia. When the time comes, your friends will become your enemies in the low-end market.

Chinese government has said it is making advances in restructuring its outdated economic model and reducing overcapacity and leverage for years, but it seems apparent that China’s growth has still been driven by the property market boom.

The Belt and Road Initiative could also complicate Beijing’s effort to stem capital outflow that have been weighing on the economy. Many netizens pointed to an official media outlet’s report written in 2015 that 90 percent of Chinese corporations investing overseas were losing money instead of making profit. Quoting the report, Twitter user @szeyan1220 believed foreign investment has been exploited by corrupt government officials to transfer huge amounts of their wealth offshore:

Wang Wenli, the deputy head of the China Economic and Trade Promotion Association, said, “Speaking overall, Chinese corporations’ overseas investment has been unsuccessful. China has around 20,000 corporations investing overseas and 90 percent of them have lost money.” If the majority of the overseas investment is losing money, why continue doing so? For money laundering purposes? To transfer assets overseas? One Belt One Road. Those who take the money find their road, and the money is taken away from ordinary people.

Zhang Lifan: The adverse effect of Belt and Road is spending money. For many years, the country is rich and people are poor. The unequal distribution of wealth has led to a very serious disparity problem. On the internet, people keep complaining that the money spent is from taxpayers and that the money should be used for health care. Many scholars question the viability of the Belt and Road and predict the various potential risks. My opinion is that it may result in spending money.

Zhang further clarified on Twitter what he meant by “spending money”:

I am just an observer rather than an opponent [of the project]. The performance is too much like the annual spring festival gala [meaning too ideological] and I give a thumbs down. When I mentioned “spending money” I am not referring to the US debt held by China but excessive printing of yuan. The ruling elite bloc devalues yuan, resulting in inflation and disparity of the rich and poor. The wealth seized from people will be cashed out in foreign currency, invested overseas or deposited in some offshore bank accounts in Caribbean, Panama and Switzerland. The Belt and Road Initiative has provided another opportunity for spending money.

In fact, the initiative is expected to spend US $5 trillion in the next five years alone, and in Asia, the investment will be up to US $2.5 trillion over the next decade. Yet, by some estimates, over half the countries that have accepted Belt and Road projects have credit ratings below investment grade and the risk for bad debt is huge. While other countries can easily back down from the initiative, as the leader of the initiative, China will be the last to quit.

Freedom of Speech  6 days ago