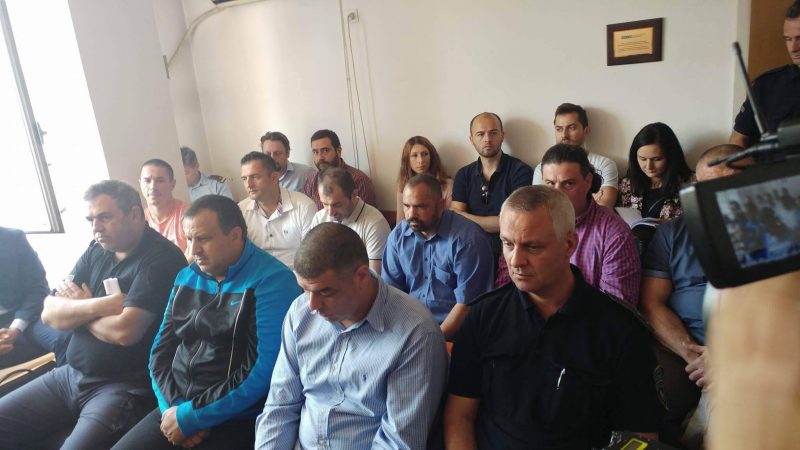 Trial of nine participants in the violence in Macedonian parliament. Photo by Meta.mk News Agency, used with permission.

In one of the speediest trials in Macedonian history, nine members of a lynch mob that stormed the Parliament on April 27 (an incident now known as “Bloody Thursday”) received suspended sentences, enabling them to walk out the court as free men.

Judge Milka Angelovska Vasovska's verdict has shocked the Macedonian public. A representative of the parliamentary majority targeted in the lynching attempt has called the verdict “orchestrated, criminal, and shameful.”

Today's court decision confirms that the state is a captive of the party and that the party is the organizer of the violent raid on the Assembly.

The vulnerability of the Macedonian judicial system to political interference is well documented. Just last year, for instance, the U.S. State Department released a country report on human rights and practices that highlighted just a few problems:

“…most significant human rights problems stemmed from pervasive corruption and from the government’s failure to respect fully the rule of law, including continuing efforts to restrict media freedom, interference in the judiciary and impeding the work of the Special Prosecutor’s Office charged with investigating and prosecuting crimes relating to and arising from illegally intercepted communications, as well as the selective administration of justice. Political interference, inefficiency, favoritism toward well-placed persons, prolonged processes, violations of the right to public trial, and corruption characterized the judicial system.”

If you are surprised by the fact that they received suspended sentences instead of prison, I can conclude that for the last 10 years we've been living in different countries.

What happened on “Bloody Thursday”?

In the evening on April 27, a mob besieged and then stormed the Macedonian parliament, wounding dozens of members of parliament and journalists. The crowd included protesters from the group “For United Macedonia” — widely reported to be a proxy for the outgoing ruling party VMRO-DPMNE, which the group denies — still holds power in the interregnum period as part of the technical government. Journalists investigating the incident reported that the attack was spearheaded by disguised members of the secret police, police, and the army.

Inside the parliament building, at least seven deputies from VMRO-DPMNE were caught on security cameras opening the building's doors to rioters. They even incited and helped guide the crowd to the former opposition.

The main targets were Zoran Zaev, the leader of Social Democratic Union of Macedonia (SDSM) and prime minister designate, and Zijadin Sela, the leader of Albanian Alliance, as well as members of the Colorful Revolution movement who recently became independent deputies aligned with SDSM.

The attack on parliament was the peak of a political crisis years in the making. The Macedonian independent media responded with fear that the president would use the incident as an excuse to declare a state of emergency and deploy security forces to finish the coup.

Notably, the deputies under assault insisted on non-violence, repeatedly sending messages to the public to remain calm. This is credited as preventing large groups of their supporters gathering around the city to rescue them from clashing with the mob.

While all this was happening, responding police officers did not intervene at first, as they'd received no orders from the VMRO-DPMNE-appointed chief of the Bureau for Public Safety, Mitko Chavkov. When the order finally came, police had little trouble dispersing the mob, albeit with zero on-site arrests. The authorities identified some of the perpetrators only days later, despite the straightforward surveillance footage from CCTV and eyewitnesses’ cell phones showing their faces.

After the attack, two secret police agents allegedly entered the parliament and seized several hard disks from a security room, but they failed to remove all surveillance evidence, leaving behind CCTV footage recorded to other devices.

Over the next several days, VMRO-DPMNE officials played down the incident. When he was asked if the mob violence qualifies as an assassination attempt, VMRO-DPMNE President Nikola Gruevski said the attackers would have killed their targets if that's what they'd really wanted.

Video: Contrasting video footage with Gruevski's statement.
Tweet: Episode 7 – #GruevskiLYING “If they wanted they could kill him.”

In fact, the attackers who managed to get hold of Member of Parliament Zijadin Sela beat him so hard, including stomping his head, that they were reportedly convinced he was dead. Some of the videos later released show that some of the assailants indeed carried guns.

According to members of the security forces who spoke anonymously to journalists, the attackers planned to begin executing people when the chaos reached a certain level. The killing apparently never began because there were too many eyewitnesses filming the event on their mobile phones.

The mob prevented ambulances to approach the parliament, so over 20 seriously injured deputies and journalists received medical care after several hours. The material damage was significant — the mob ransacked the building, stealing office equipment and food from the cafeteria.

A special report by the NGO Macedonian Helsinki Committee — based on “photos, audio-visual recordings, and testimonies” — indicates that more than two dozen separate criminal acts were committed during the attack on parliament:

“The crimes are established as such in 8 chapters of the Criminal Code, and were directed against: 1) the life and body, 2) the freedoms and rights of citizens, 3) property, 4) security, 5) State, 6) office, 7) judiciary and 8) public order.”

Nevertheless, state prosecutors embraced the narrative supported by the former ruling party. Instead of facing more serious charges, the nine suspects went on trial for “participation in a crowd planning to conduct a criminal act.” Some of the defendants had prior felony convictions, included one convicted murderer.