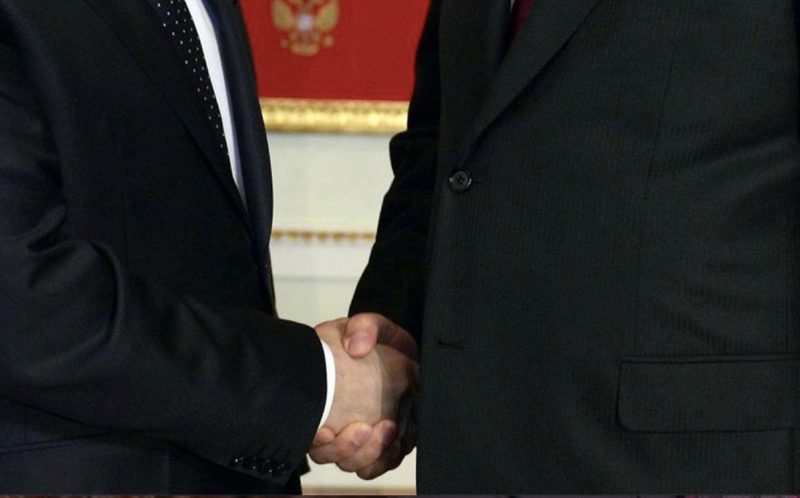 Tajik president Emomali Rakhmon grips Russian leader Vladimir Putin's hand during a recent trip to Moscow. Russian government image in the public domain. Cropped for the purposes of the article.

Smaller-than-average hands, but a bigger than average handshake. Since Donald Trump became the 45th President of the United States of America, screeds and screeds of Internet have been devoted to analysing his hostile-seeming handshakes with world leaders.

According to the raft of online analysis covering these moments of first contact, most of them have been drawn — quite literally — into the Trump trap. The roughhouse technique seems to involve Trump using his considerable girth to pull his opponent into his body. If that fails, he simply ensures that his fingers get further up the wrist of the unsuspecting foreign leader than might reasonably be expected in any non-competitive hand-offering.

In an article for the Independent UK newspaper, Geoff Beattie speculated that the move is an extension of Trump's ‘America First’ foreign policy, and ultimately, a play for the cameras.

Whatever the motivations behind the Trumpshake, it cut no ice with Emomali Rakhmon, Tajikistan's de facto president-for-life, who he met in Riyadh, Saudia Arabia as part of the Arab Islamic American Summit on May 21.

We have found the person who can defeat Trump in the handshake stakes.

@a_imanaliev ? It scared him… He had to step in! #impeachtrump

@a_imanaliev Yeah Buddy. he was ready for his jerking ass. Good.

@a_imanaliev You can tell who has the most power in this room.

As can be observed in the gif above, Rakhmon, whose authoritarian Central Asian country is the poorest in the former Soviet Union, clearly came out of the shake as the stronger strongman, joining Canada's Justin Trudeau on the elite list of non-losers in Trump's favourite sport that isn't golf.

But while Trudeau's memorable counter to Trump during their meeting in February was all about planning, Rakhmon's victory seemed to have been secured with instinctive brute force, neatly summing up the theme of his rule of more than two-decades over Tajikistan.

It's all about him

With corruption entrenched and around half of working-age males seeking work abroad in Russia, Rakhmon, 64, has honed a talent for projecting an image of success in a failing state. His recently-accorded official title is “The founder of peace and national unity – Leader of the Nation”, which pays tribute to his leading the country out of a bitter five-year civil war that befell it shortly after independence from the Soviet Union in 1991.

In an article for Litro magazine, American researcher Emily Neil quotes a Tajik woman explaining her reverence for a figure, who to most observers beyond the country's borders is the epitome of a self-serving, old-school dictator.

“That is why I love Rakhmon,” Parvina said, bread still in hand, shocking me with her directness.

All Americans, laughed at Rakhmon and his regime, ex-KGB types, running the country with the most ridiculous gestures of authoritarianism: the billboards, the government-sanctioned “news” declaring the prosperity of Tajikistan, showing image after image of full crop fields accompanied by floating, inspirational music – even his recent declaration earlier the year before of his title not just as president, as he had been since peace was achieved in 1997, but also as “Leader of the Nation,” reminiscent in its bleak grandiosity of something straight out of the Hunger Games.

She explained to me as well as she could, as well as I could understand: “He is why there is bread now. He is why you, a foreigner, can be here right now.”

Rakhmon was not a billboard: He was a fact that meant that in her hand was the smooth, round bread, a fact that was the reason why I was sitting there, why I had boarded a plane and landed in Dushanbe, where I could play in the alley with her daughters without fear of being shot. Why my government’s heavily-weighted, paper-thin green dollars changed hands, became somoni and now could rest safely in the wooden trunk under the bed in her room.

Yes, it was funny, but nothing about Parvina’s face – her mouth which so quickly smiled when playing with her children, her eyes which would light up as we talked about our mutual love of Enrique Iglesias – showed any sign of amusement now.

That is not the whole story of course, and individual freedoms have nosedived to such an extent in recent years that any Tajik offering a critical opinion of Rakhmon in print would have to seriously consider the prospect of jail time, but the point remains clear: Rakhmon is Tajikistan's Mr. Everything. (If it needs to be clearer, check out this image of Rakhmon manning a bulldozer to begin work on a hydroelectric dam his country might never be able to pay for).

And yet in one sense, he came to power, like Trump, as an outsider.

A former collective farm boss from the country's rural hinterland — the traditional elite during the Soviet period was sourced from the more industrialized north — his promotion to the leadership was supported by powerful security figures that believed they could control him. Many ended up dead after he consolidated his position.

Like Trump, Rakhmon has a sense for a photo opportunity, and like Trump his life story stands as a dubious tribute to the male ego and its dangerous capacity to dominate and control by any means necessary.

But unlike Trump, Rakhmon isn't some lily-fingered son of privilege — he knows how to come out on top in a handshake war.