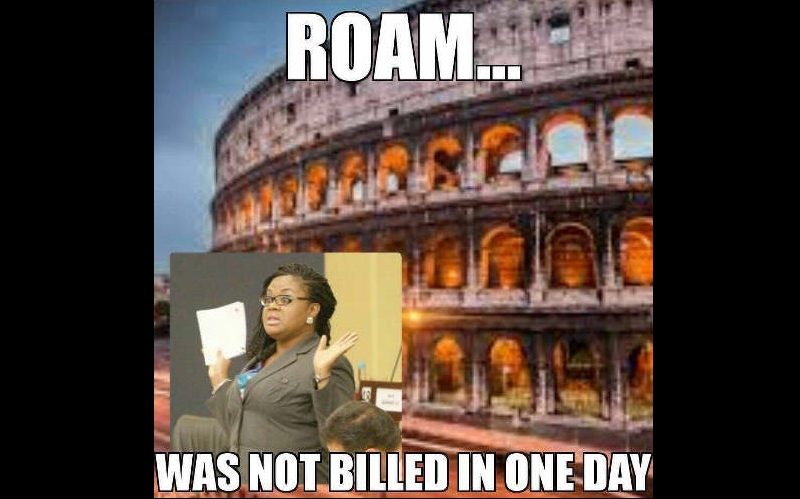 With oil prices down, Trinidad and Tobago's energy-based economy has had to adjust. These are lean times; foreign exchange is less available and the government is trying to make up the country's revenue shortfall any way it can.

Imagine the public's consternation, then, when news broke that two government ministers in particular — Shamfa Cudjoe, the minister of tourism, and Darryl Smith, the minister of sport and youth affairs — have not been adhering to the same belt-tightening rules.

Cudjoe stunned netizens when it was revealed that she ran up a TT $59,000 phone bill (approximately US $8,740) over the course of four days. She later explained that only $1,100 of the billed amount represented phone calls — the balance consisted of roaming fees and value-added tax (VAT) at a time when she was in the Bahamas for a tourism-related event.

In a press release, Cudjoe said, “At the time of the trip, the Ministry was dealing with several issues which required my attention and therefore necessitated that I remain accessible. During this period, as is common while travelling on official government business, my mobile telephone was placed on roaming. However, at every reasonable opportunity, I also made use of the Wi-Fi facility where it was available.”

She claims she too was surprised by the high bill and asked the ministry to “launch an immediate investigation” into the charges. The cell service provider, Telecommunications Services of Trinidad and Tobago (TSTT), has said that it had no control over the roaming charges imposed by regional and international carriers.

Netizens were not too quick to buy Cudjoe's declarations of fiscal responsibility, however. The hashtag #callmeanytimeyouwant soon started to make an appearance and she soon started being referred to on social media as the “Minister of Roaming”.

On Twitter, Rhoda Bharath was truly incredulous as to how this could have happened:

I breaking this down into byte size pieces. $50k in data. Not calls. Over 4 days. On a phone. In a hotel with wifi.#callmeanytimeyouwant

Where things get interesting is the cost of data charges in the Bahamas and what they actually mean in downloaded/used data.
When the math is done, the exorbitant rate indicates that the Minister used roughly 800 mb of data. That is average data use over a 4-day period for many persons. And what it actually reveals is that $59,000.00 in data charges wasn't racked up from intense use of the phone to remain “accessible”, but from casual data consumption at extremely high rates.
Which then begs the question, how often is the state shouldering $60,000 bills for casual consumption of roaming data overseas by Ministers and Ministry officials? […]

Abuse of the public purse is nothing to defend or scoff at!

Many social media users were of the opinion that Cudjoe should pay back the roaming charges. Kathryn Stollmeyer Wight lamented:

She has to pay us back because nobody is ever taken to task or made to account & there will be absolutely no justice with this scandal. […]

Its time to get a voice people & stop the nonsense in this place. Call them all out! Demand our hard earned tax dollars are spent wisely!

Pay up HONORABLE Minister Cudjoe, & frankly, while you paying up, resign too. Now that would really set an example.

Over at biting news site Wired868, Rudy Chato Paul Sr had a few questions, including how many bills of this size have taxpayers unwittingly paid, and whether there is a mechanism by which the public can access this information — perhaps through the Freedom of Information Act (FOIA).

Naturally, some folks took a humourous approach to the situation. Errol Jaikaransingh quipped:

Roam wasn't billed in a day

Justin Phelps, referring to the popular pre-paid cellular phone plans in which customers can “top up” their credit at any time, enjoyed a play on words:

I need a top-up, but ah shamfa ask fa it.

The memes soon followed, and were widely shared on Facebook: 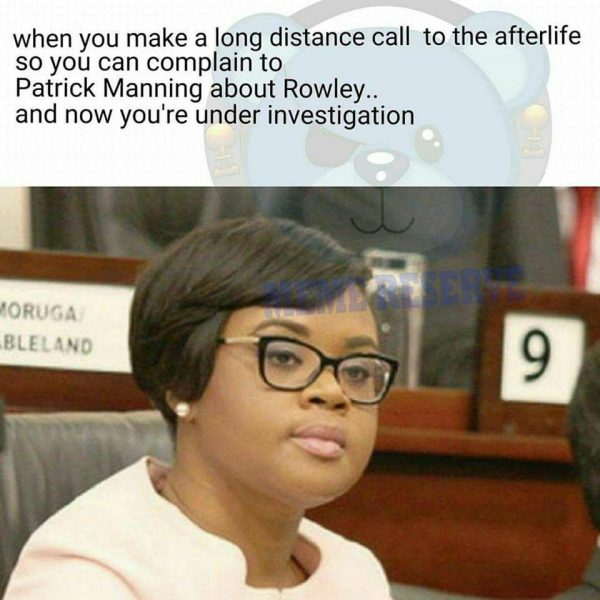 “When you make a long distance call to the afterlife so you can complain to Patrick Manning about Rowley.. and now you're under investigation.” Meme, widely shared on Facebook. 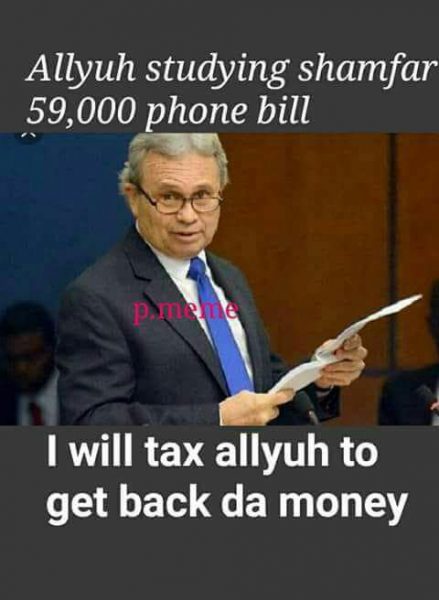 TSTT's competitor, Digicel, used the controversy as an opportunity to promote its services:

Don’t let roaming rates get you down! Avoid surprises when you sign up for Digicel’s One Rate Roaming Plan.

The minister of sport's ‘Tobago joyride’

The situation was even less funny when it came to the country's minister of sport, Darryl Smith, who ran up a bill for over TT $90,000 (about US $13,333) on a visit to Tobago. On her blog, journalist Sharmain Baboolal broke the story, referring to the trip as a “Tobago joyride”:

Inserted at the last minute, three women who ‘did not receive invitations’ for the Tobago House of Assembly (THA) Awards turned out to be the guests of honor of the Ministry of Sports and Youth Affairs (MYSYA) at an all inclusive weekend for a party of 12 at the Magdelena Grand, costing taxpayers TT$91,910.43.

One of the women named is Kate Balthazar, who showed up on social media radar at the beginning of 2017, with several netizens calling into question the nature of her relationship with the minister.

Baboolal's post contained images of the hotel bill, along with other details:

An additional TT$10,400 was used to rent four vehicles from Rollock’s Car Rentals even though the hand written quotations, approved by the Permanent Secretary in the Ministry, Natasha Barrow, stated categorically that the trip was to attend the THA [Tobago House of Assembly] Awards which was [sic] held in the same hotel. […]

On the night of the Awards, according to information released by the THA's Information Department, it was only Minister Smith who presented Awards at the ceremony.

Wired868 reported that Natasha Barrow, permanent secretary in the ministry, defended the guest list and expenditures by saying there were important meetings during the trip, but anonymous staffers that the site had spoken to “contradicted her account”:

Smith did offer some consolation to the Trinidad and Tobago public on his Ministry’s use of taxpayers’ money at the Magdalena Grand Beach and Golf Resort.

‘Ent is [Isn't it] the government’s hotel?’ Smith asked rhetorically. ‘So the money staying in the system.’

It betrayed a level of economic ignorance that was so brazenly repulsive and insulting and yet, at the same time, full of such absolute childish ignorance that one had to stop and stare, open-mouthed—like looking at a stool the size of a papaw in a public restroom.

Wired868 summed up the whole affair by saying:

Someone needs to bell the cat and there is no time like the present. In these days when our tightened belts are already like nooses around our necks, taxpayers cannot afford to be saddled with the likes of Minister Roma or Minister Romeo.