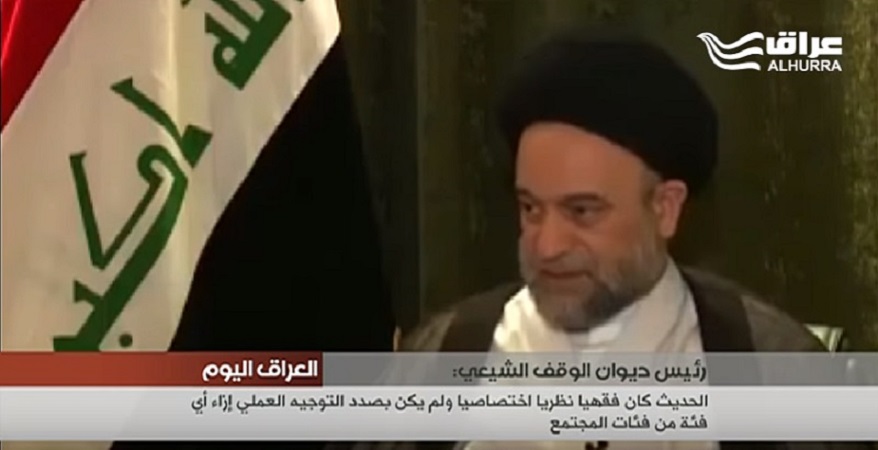 Screenshot of Alaa al-Moussawi during an interview with al-Hurra. Source: YouTube

A video recently emerged of Alaa al-Moussawi, head of Iraq's Shia Endowment Fund (a government funded organization to maintain religious sites), seeming to call for Iraq's Christians and Jews to convert to Islam, be killed, or pay “jizya,” a religious tax on non-Muslims.

The three-year-old footage alarmed the country's Christian community (Iraq's Jewish population is near nonexistent) due to the parallels between his remarks and rhetoric from the brutal militant group ISIS. In 2014, after ISIS swept much of northern Iraq, Christians were faced with a similar ultimatum. Many families opted to flee their homes after they were forced to choose between converting and death.

In an interview with al-Hurra, an Arabic language news channel, al-Moussawi responded to criticism by claiming he was taken out of context and this was an attempt by ISIS supporters to fracture the relationship between Iraq's Shia and Christian communities. He also claimed that the particular footage came from a religious lesson given at a mosque in the sacred city of Najaf on the subject of non-Muslims during early Islam. He stressed that the purpose of the lecture was simply informative and added that he did not call for harming Iraq's Christians.

In an attempt to resolve the tension between the two communities, al-Moussawi sent a delegation to the Babylonian Brigades, a Christian movement formed to reclaim land lost in 2014, with a letter apologizing and explaining the context of the video.

The anger sparked by his remarks initially led to a number of lawsuits against al-Moussawi, including one filed collectively by 180 families for “instigating incitement against Christians and disturbing the plurality of Iraq.” However, an understanding was reached to drop all complaints after a formal meeting with a Christian delegation led by Rayan al-Kildani, head of the Babylonian Brigades.

You can watch a clip of the three-year-old interview in question below:

‘We will not abandon the land of our fathers and grandfathers’

Since the overthrow of the Ba'ath regime in 2003, Iraq's Christian community has dwindled from 1.5 million to around 500,000 due to increased sectarianism. Reporting for the United States government-funded new outlet Voice of America, Rikar Hussein described the reality of Christian emmigration:

According to Iraqi Christian Relief Council, a non-profit organization that advocates for Christian minorities in the country, sectarian violence following the U.S.-led invasion of Iraq and systematic targeting of religious minorities by IS and other militant groups have forced approximately 80 percent of the Christian population to leave the country.

While the past three years have been especially troubling for the Iraqi Christian community, many have voiced their commitment to return to their ancestral homes in Nineveh province. According to Louis Sako, head of Iraq's Chaldean Church, some 1,300 families want to quickly return to their liberated towns, including Tal Usquf, Baqofa, and Batnaya.

In an article for the New Arab Ninos Abdul Ahad, a displaced Iraqi, defiantly pledged the return of the Christian community:

The Christians will return to their land, despite the destruction we will rebuild churches, schools, and homes, and remove the remnants of ISIS. We will not abandon the land of our fathers and grandfathers.”