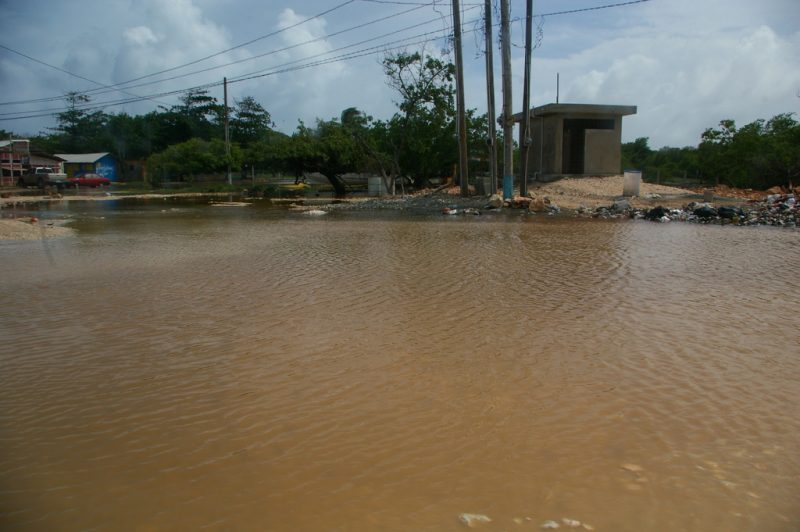 Three days of heavy rains associated with a trough caused chaos and disaster in many parts of Jamaica between May 14 and 17, 2017, raising burning questions over poor planning and development, badly designed and inadequate drainage systems, and Jamaicans’ continued careless solid waste disposal practices.

As Jamaicans start to pick up the pieces, the government has much work to do in counting the cost of the damage — including a review of the island's arrangements with the Caribbean Catastrophe Risk Insurance Facility, which is the first multi-country risk pool in the world, designed “as a regional catastrophe fund for Caribbean governments to limit the financial impact of devastating hurricanes and earthquakes by quickly providing financial liquidity when a policy is triggered.” Jamaica has not benefitted from the facility over the last ten years, because the natural disasters it has experienced have not qualified for payouts.

However, the damage to infrastructure from the rain was considerable. In rural areas, many roads were blocked by floods and landslides, communities marooned and several bridges swept away. There was a landslide (the second to date) on a section of the Chinese-built North-South Highway linking the capital, Kingston, to Montego Bay.

The extreme weather was not connected with any storm system, but the local Meteorological Office noted:

.@MetserviceJA head Evan Thompson says rainfall over past day has exceeded the usual amount for the entire month of May #JaWeather

An interesting satellite annimation of the extreme (#flooding) rainfall across the western #Caribbean this past week. pic.twitter.com/GrKzC9QP7V

Local media did a great job of reporting from rural areas:

PHOTO: This mother in St Catherine NE ensured her fifth-form daughter got to school today to sit her CSEC exams – @Ian1foto #JaWeather pic.twitter.com/1Xux0mrfzg

Meanwhile, in town, Kingston's mayor Delroy Williams went on an eye-opening tour of a community where a large gully, choked with debris, opens into the sea:

Stop #6 The source of the flooding at the school. We cannot continue to dump in drains and gullies. In the end we are affected. pic.twitter.com/5cNUhE0skp

Prime Minister Andrew Holness cut short an official visit to the Dominican Republic and hit the road on his return to the island:

Met with Nordia Lewin of Sunnyside who gave me an account of her ordeal during the heavy rains where she was trapped with her twins. pic.twitter.com/lMifYmktI9

Other politicians rushed to their constituencies to survey the damage, complaining or making excuses about blocked drains, and making sure that their presence was noted via social media:

Assessed the situation in WC St. Catherine after today's heavy rains. Working w/ Food For The Poor to help those whose homes were flooded. pic.twitter.com/dB5CTFpiHt

The rains affected most parishes. Reports flooded in from people on the ground on social media. In the east, Ann-Marie Vaz shared photos:

Horrible damage to roads in #Portland Lawks I cannot!??? pic.twitter.com/GOzWo2gcao

The parish of Clarendon (which has suffered long droughts in recent years) was especially hard hit:

Another bridge in Green River, Clarendon under threat. It's main link betwn Frankfield & southern parts such as May Pen #Jamaica #Flooding pic.twitter.com/15m1sFsEGz

Many rivers spilled their banks:

Right now in the Flat bridge area, the water is as high as the stop light
Be extremely careful pic.twitter.com/JlPYfLefsU

While some technical experts suggested an inadequate drainage system was partly responsible, observers on Twitter noted:

The mayor of Kingston also tweeted his concerns that things might not get any better if extreme weather events become more common:

@IReggaeDay @MetserviceJA We however need to assess our drainage capacity and town planning & see if this unprecedented rain will become the norm due to G.Warming

Most schools closed for at least one day, while students struggled to reach examination centers to take external exams. The minister of education tweeted:

Schools except those in Westmoreland,Hanover and St James should close today . Will try to accommodate exam students only.

While emergency services worked hard to bring things back to normal, one government agency — the National Water Commission — celebrated with cheerful music:

What a #waterview!
The Hermitage Dam is now 100% of capacity! pic.twitter.com/RQu9dEhAQD

Poorly planned housing developments and highways were cited as major contributors to the devastating floods, with one geologist observing that while many useful surveys have been done and the problems identified, the data is not being used to inform decisions to correct those problems.

A lack of proper maintenance was also cited.

Opposition Leader Peter Phillips admitted to bad planning and regulation, including “informal settlements,” over the years.

Another contributing factor has been poor waste disposal practices — including the unhealthy habit of dumping garbage in gullies that run down to the sea, becoming choked and polluted along the way. On Twitter, many agreed with activist Carol Narcisse's comment:

We will never have enough money to clean drains&gullies at the rate that garbage is dumped in them. Needs massive natinl behavr change progr

Meanwhile, the Jamaica Environment Trust (JET) took the opportunity to reinforce its ongoing campaign “Nuh Dutty Up Jamaica” (Don't Dirty Up Jamaica) with its catchy song and clever video.

JET's Deputy CEO summed up the concerns in a letter to the Gleaner:

Global climate change is expected to increase the frequency of extreme weather events like this one. Unless we change our daily habits and development practices, we can expect high financial and social costs to life, livelihoods and property to continue. Accepting individual responsibility for the garbage we produce is one way for every Jamaican citizen to do this.

The lack of bins or infrequent garbage collection is no excuse for dumping our waste in the streets or in gullies.

At the same time, the state must also take a lead role in improving the way our towns and cities are managed, with better solid waste infrastructure, preservation of green spaces and enforcement of planning laws and regulations. We must also take the protection of our forests much more seriously at the individual and state level if we are to have any hope of mitigating the threat of Climate Change.

As citizens clean up, they're casting blame in various directions, while officials tally the damage, including the worrying impact on the national budget. Both the government and Jamaica's people are in for some tough changes, as climate change continues to impact the region's fragile island nations, forcing difficult choices.