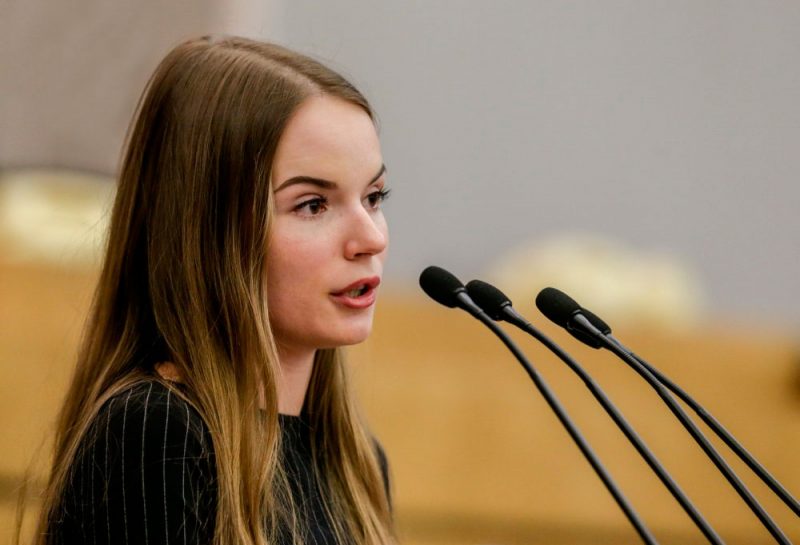 The past two months have been a hard time for young people in Russia, where teachers and lecturers in classrooms across the country have berated and insulted students for suddenly showing an interest in activism. But it might be Russia’s politicians who are worried most in this new political climate.

Federal lawmakers, at any rate, are concerned enough about Russian youths that they invited 19-year-old YouTube celebrity Sasha Spilberg to address a packed session of the State Duma on Monday.

A woman who once submerged herself in a bathtub filled with potato chips for her 5 million YouTube subscribers, Spilberg visited the Duma as part of a new effort by United Russia, the ruling political party, to explore ways to “prevent the use of young people as a driving force in protests.”

Officials have been in a state of alarm ever since thousands of teenagers and university students joined nationwide anti-corruption protests on March 26, organized in large part by presidential hopeful Alexey Navalny. The demonstrations especially targeted Prime Minister Dmitry Medvedev, whom Navalny has accused of accepting large-scale bribes through a network of corrupt charities.

“I’m not too great with politics, with the names of all the parties, and so on, but I know how to talk to a large audience,” Spilberg told the State Duma on Monday. “My mission is to help facilitate a dialogue between the state and society, to which I belong.”

Spilberg also shared some advice: “Subscribers are the same as voters, except that the returns are visible in real time. Every one of my videos is a mini-election. I’ve been completely transparent since the age of 13, and any screw up — any falsity or laziness — triggers an instant reaction from my audience. Be transparent: share videos on YouTube, and post things on Vkontakte, or whatever social network you like best.”

After laying out this bold strategy for winning over young people, Spilberg then suddenly backtracked, telling the Duma that politicians have no immediate need for videobloggers. “The age bracket isn’t there yet, and its influence is still too low. I, for one, have voted in elections and will continue to vote, but I plan to vote in the polling booth and not on social networks.”

Spilberg concluded her remarks with a shot at her YouTube “colleague” Ruslan Sokolovsky, the atheist blogger in Yekaterinburg who was recently given a 3.5-year suspended sentence for insulting religious people with satirical videos, including one video showing him playing Pokemon Go inside a cathedral.

“Excuse me for saying this, of course, but he’s an idiot,” Spilberg told the Duma, telling the deputies, “Idiots need to be cured or fined.”

Backtracking again, however, Spilberg then warned that “prosecuting such people” is “harsh and unpragmatic,” and erodes young people’s trust in the government.

Last month, Spilberg made headlines for scoring an interview with Vladimir Medinsky, Russia’s minister of culture. Unlike her many videos featuring wacky stunts or music, Spilberg’s interview with Medinsky was a largely straightforward conversation, where the federal minister described the Internet as a modern-day medium for the popularization of Russian culture.