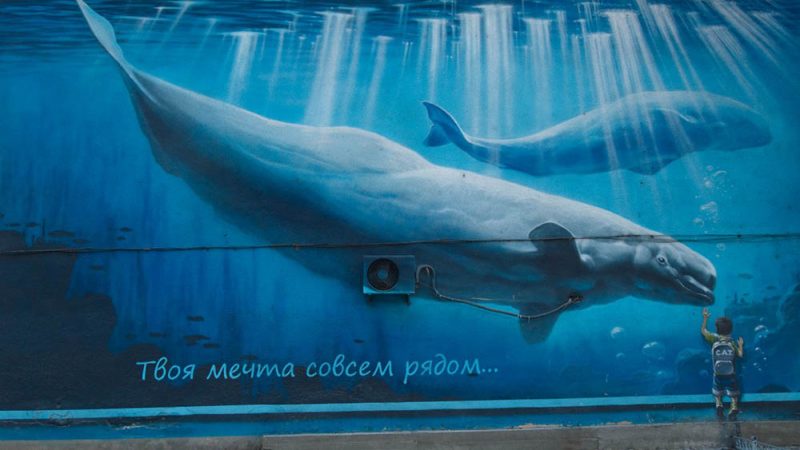 Whale-themed street art in Bishkek that was white-washed after panic over the so-called ‘Blue Whale’ game erupted. Image from Kloop.kg, creative commons.

China is cracking down on an online suicide game called “Blue Whale” that originated in Russia.

Authorities have begun blocking keywords related to the game on local search engines, and numerous game groups on social media have been dissolved. On May 12, a Chinese teen was arrested for spreading extremist thoughts online while participating in the game.

The game is organized through social media and players have to complete a series of tasks including waking up at 4:20 am for 50 consecutive days. Some of the tasks involve self-harm and players can ultimately be encouraged to commit suicide.

Russian media outlets have widely reported that the “Blue Whale” suicide game has been responsible for more than 130 suicides in Russia has been widely spread via tabloids in different countries, including China, though news outlets including Radio Free Asia, Meduza and fact-checking website Snopes have pointed out that the claim has not been proven and may be overblown.

The content and culture around the game are troubling, but China's response may be misguided and in fact creating more interest around “Blue Whale”.

On May 8, a number of Chinese media outlets issued a warning against the “invasion” of the Russian suicide game “Blue Whale”, urging Internet users to report to the police if they spotted the game groups. Local news outlet STV summed up the reports on the social media platform Weibo:

[Suicide game has arrived?] Yesterday (May 8), a number of media outlets issued a warning regarding the Russian suicide game “Blue Whale”. If you know someone using keywords like “Blue Whale” or “Wake me up at 4:20am” on social media with a “Blue Whale” image, please be cautious because he may have participated in the suicide game called “Blue Whale”. We, in particular, warn the parents, to please pay attention to your children’s QQ groups. This is not a joke!

The warning was based on the Chinese cyber police’s call for a boycott on the game. In China, where Internet censorship is systematic and pervasive, the noise around the game has turned into a political campaign. Global Voices also covered this phenomenon in two of China's Central Asia's neighbours, Kyrgyzstan and Kazakhstan.

Given China's sophisticated online censorship environment, the claim that the “Blue Whale” game had entered China on any serious scale should be viewed with some skepticism. As in Kyrgyzstan and Kazakhstan, evidence suggests that the real swell of interest in the game began after the media and online campaign against the groups.

On May 9, the day after the media warning, the Chinese Communist Youth League announced on Weibo the launch of a “Project Whale Hunt” campaign:

Why are you locking yourself up under the deep sea? You could fly in the free sky! “Project Whale Hunt” has begun…

Another party-affiliated organization, Mama Juries, posted a similar message on Weibo on the same day:

[Please report on “Blue Whale”] is a suicide game originating from Russia. The game encourages gamers to carry out self-harm tasks consecutively over 50 days. Many young people have been induced to end their lives. QQ groups like “wake me up at 4:20am” have appeared in our country. The QQ security team has started cleaning up these groups. Behaviours associated with the “Blue Whale suicide game” are criminal behaviours as it involves organizing and inducing others to self-harm and suicide. Mama Juries reminds parents to check on your children’s mobile phone [to see if they are members of] social groups that have keywords like “Blue Whale” or “Wake me up at 4:20am”. If you spot the groups, please report them!

In this campaign, organizations such as the Communist Youth League and Mama Juries have been mobilized by the Beijing Internet Information Office. The same office has also demanded that major websites and social media platforms fall in line with the mass campaign and public reports.

On May 12, the Beijing Internet Information Office, Public Security Bureau, Administrative Law Enforcement in Cultural Market Team held a meeting with eight Internet companies to report on the crackdown on “Blue Whale”. 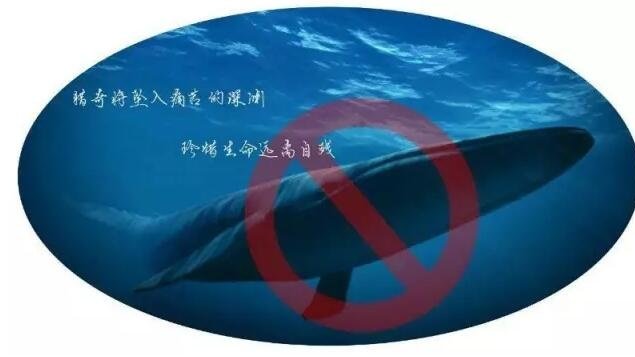 According to a local media report, Internet giant Tencent has closed a few dozen QQ groups and blocked the related keywords from its search engines. Baidu has closed all the forum discussions with keywords like “Blue Whale” or “Blue Whale game”.

A message, “Please stay away from activities that could induce self-harm”, now pops up in the Baidu search engine when users search “Blue Whale”. All associated search results have been cleaned up to make sure that searches do not link to websites that advocate for self-harm or suicide.

Sina Weibo has blocked search terms and deleted messages associated with the game.

Cyber police offices from all across the country have assisted the crackdown either by reposting warning messages or investigating netizen reports. In most cases, the police have asked the group's administrator to dissolve the group.

But in Guangxi province, Zhanjiang city police detained a 17-year-old on charges of “spreading extremism” by posting images and comments encouraging acts of self-harm “tasks” to a chat group on QQ on May 12.

The teenager told the police that he joined the QQ “Blue Whale” game group on May 9, after local media outlets launched the campaign.

According to Guangxi police, his QQ group originally set out to sell computer software and clothes. In order to attract more members he started posting information about “Blue Whale” after he read the authorities’ warning on local media outlets.

He also posted an image showing an arm with a blue whale cut into it and fabricated information that eleven members of the group have ‘finished the task’, managing to attract more than 200 new members to his group in the process.

The teen's experience suggests that media coverage and the aggressive effort to curb participation in the game may be attracting more public attention to “Blue Whale”, and thus having the opposite effect.

Those who cannot repress their curiosity will now inevitably find ways of accessing the game beyond the Great Firewall that defines the Chinese internet. In response, the Youth League has developed another spur to its campaign by spreading the Happy Blue Whale guideline online.