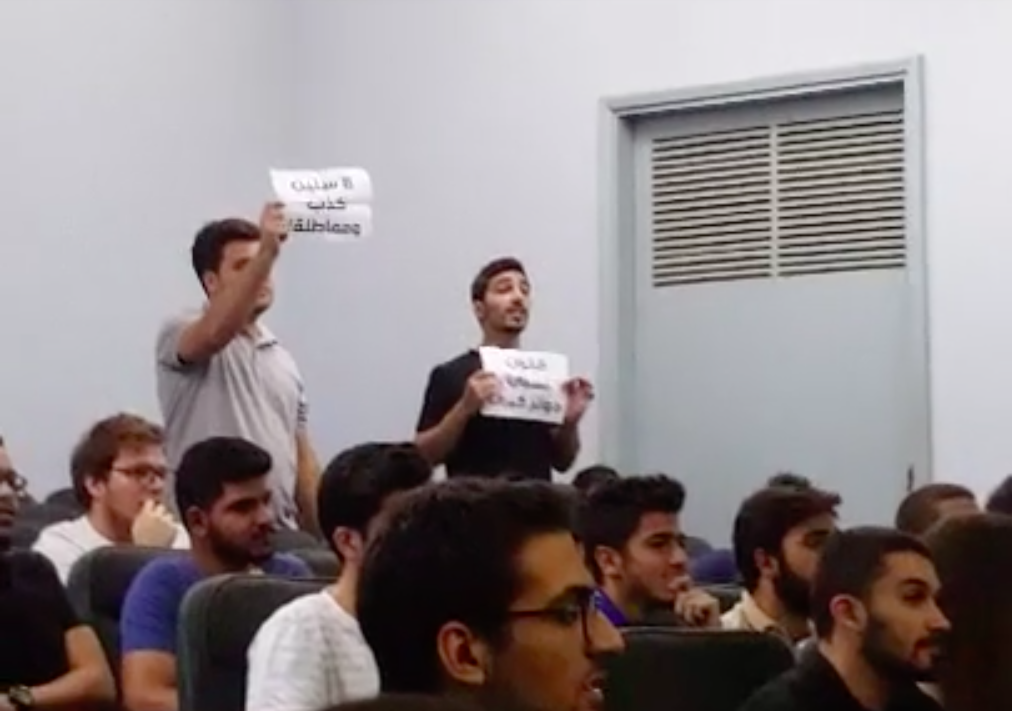 Snapshot of the video of the You Stink Protest. Source.

On May 19, two activists from the “You Stink” movement disrupted a talk involving prominent Lebanese politicians at the campus of Saint-Joseph University (USJ) in Beirut.

“You Stink”, a Lebanese political movement, which was launched as a response to the 2015 trash crisis, and an array of independent political groups and civil society organizations are calling for a new proportional law with big electorates. 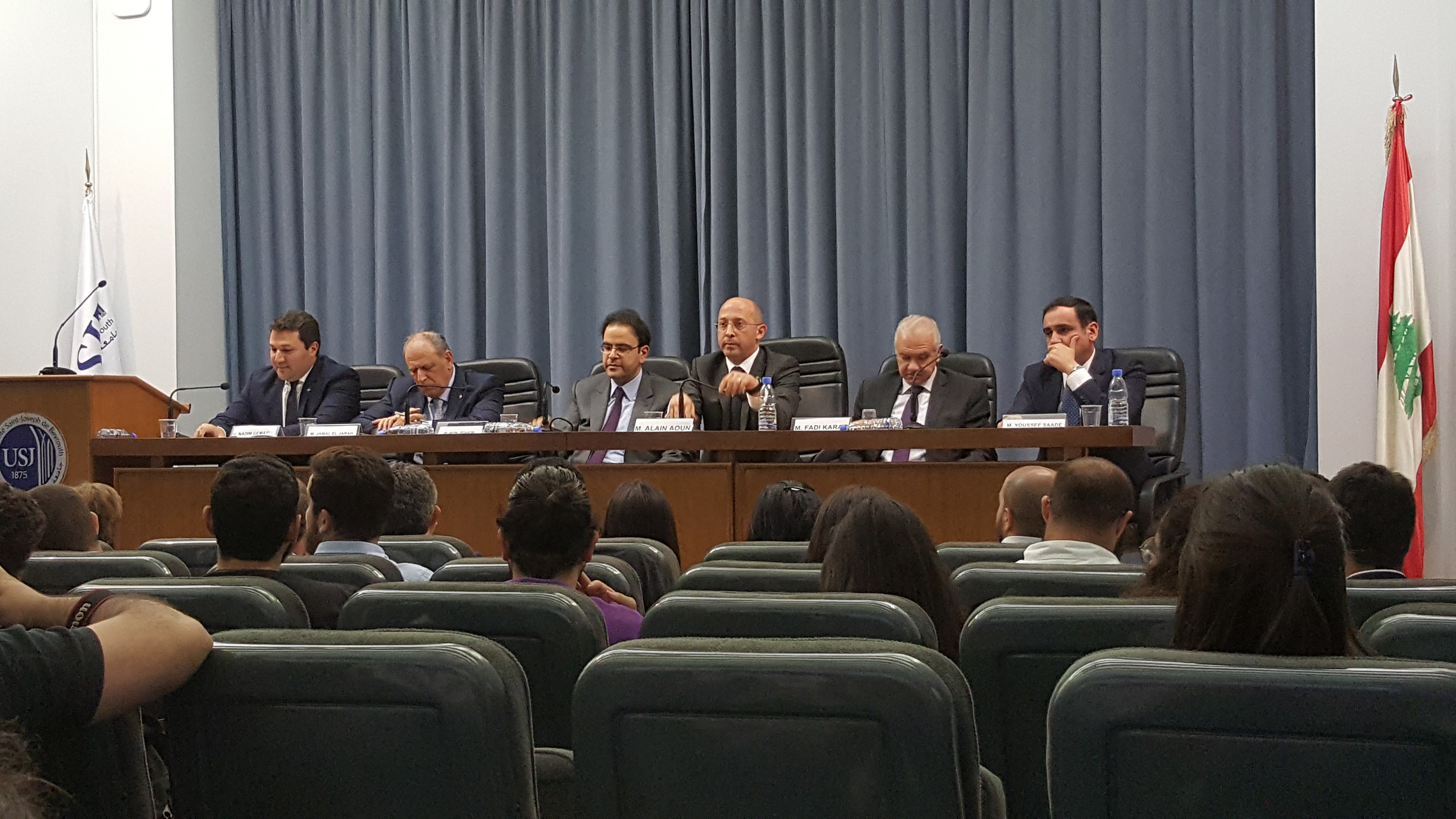 Talk by the politicians at the USJ university. From left to right: Sami Gemayel, Jamal Jarrah, Alain Aoun, Fadi Karam and Youssef Saade.  Source: You Stink. Used with permission.

The politicians were debating the electoral law and the extension of parliament, despite the fact that the MPs are themselves part of the parliament which extended its own term twice.

As Joey Ayoub, regional editor at Global Voices for the MENA region, explained on the March 23:

Elections should have taken place in June of 2013, but the parliament extended its own term for 17 months citing ‘security concerns’. Then, in November of 2014, citing the need to decide on a new electoral law before voting, the parliament delayed elections to 2017. This time, the government is saying the extension is for ‘ technical reasons’, in reality the parliament has reached a deadlock on the new electoral law.

And as the second extension's deadline on June 19 is getting close, a third extension is being talked about. This, to quote Ayoub again, means that most Lebanese youth has yet to vote and won't be able to until further notice.

To put this in perspective, a 28-year-old Lebanese citizen has yet to vote for their parliamentarian of choice despite being legally allowed to vote since they turned 21.

Lebanese politicians have been discussing the electoral law on and off for years. The debate concerns whether Lebanon retains a majoritarian system, or adopts a proportional one, as called for by many civil society groups and independent political parties. The current electoral system is defined by “block voting”.

Critics argue that the current electoral law, called the 1960 electoral law, adopts a ‘winner takes all’ approach with a single round.  For example, if an electoral list gets 51% of the votes, it gets all of the representation. An electoral list that got 49% of the votes gets nothing, resulting in a full victory for the one that got 51%. This, many argue, doesn't allow for the emergence of new political forces and explains why Lebanon has seen the same parties recycled in recent decades.

In addition, the current law is also sectarian because the Lebanese parliament has to be divided equally between Muslims and Christians, meaning each confession has a predetermined number of seats.

The Kataeb for example, are calling for single districts, giving them more control on the district by gerrymandering it by sect. Activists have instead opposed such sectarian thinking, arguing that big electorates reduce sectarianism and corrupt clientelism. With bigger districts, they say, candidates will have to expand their campaign rhetoric beyond their own sects in order to win a bigger constituency.

The event was recorded live on Facebook by a third activist with ‘You Stink’. The two protesters were soon taken away by students supportive of the politicians, however.

The signs held by the protesters read: “proportional electoral law and big electorates” and “eight years of lies and procrastination”, referring to the fact that the current parliament has been in power since 2009. One of the protesters said: “Go home!”. The other continued: “Eight years you've been laughing at us.”

They continued to shout “is this your civilized way to do things?” while being forced out.

Speaking to Global Voices, Tarek Serhan, one of the activists in the video, explained they were simply trying to make a point:

We wanted to tell them “You Stink, your expiry date is passed, you can now go home, you are discussing democracy but you stole people's rights by not allowing them to vote.”

Speaking about the students who pushed them out, he said:

We told them we were peaceful and that they don't need to shove us in that manner.

We told them that we do not want any fight, they mocked us and said that you cannot even fight us.

A member of ‘You Stink’, who preferred to stay anonymous, told Global Voices that the activist who took the video was also followed and intimidated.

In less than 24 hours, the video has been viewed more than 42,000 times on Facebook, with many comments supporting the two activists who protested, condemning the students who ushered the protesters out and the students who stayed idle.

Elie Rizk asked: “Why the other students didn't react?”

Screenshot from the comments section in the video. Source: Facebook

Mi Chel commented: “Even the freedom of speech is oppressed and denied. Under what authority have these men been assaulted and taken out of the room?”

Screenshot from the comments section in the video. Source: Facebook.

The parliament was supposed to meet Monday May 15 to debate the electoral law, but, as has become typical, the session was adjourned.