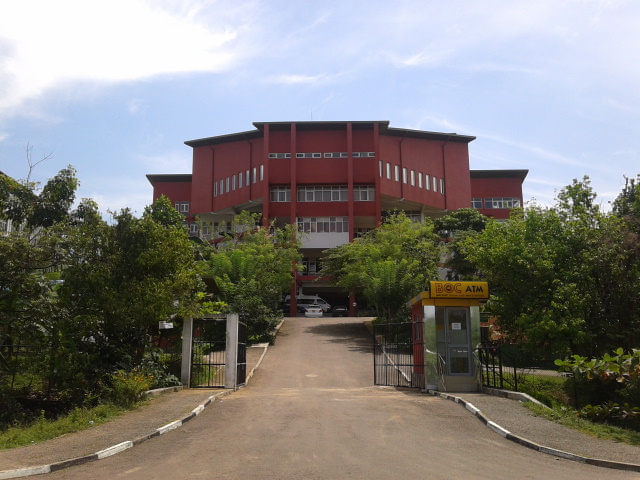 The main building of the South Asian Institute of Technology and Medicine in Malabe near Colombo. Image by Mediajet via Wikimedia Commons

In Sri Lanka, doctors and students have been protesting for months requesting the government to shut down the private South Asian Institute of Technology and Medicine (SAITM), the only private university in Sri Lanka currently training medical students.

They are against the privatization of education and claim that opening private universities will drastically affect children from poor families’ access to education opportunities.

In Sri Lanka, education is state funded and offered free of charge at all levels, including university level. Doctors affiliated to the Government Medical Officers’ Association (GMOA) staged a one-day strike earlier this month, protesting police action against students and demanding that the government shut down or nationalize the private medical university.

Defying a court order, about 5,000 members of the inter-university students federation (IUSF) carried on with the protest on May 17. Failing to stop them, the Police tear-gassed the protesters and drove them into a nearby park. Several protestors were injured and admitted to nearby hospitals.

The protests caused severe traffic congestion in the area of Colombo where they took place.

Several students and a Buddhist Monk were arrested during the protest.

The case against SAITM

Since its launch in 2008, SAITM has been the centre of many controversies as students from state-run schools and doctors in government services have questioned its educational standards and medical facilities. More than Sri Lankan Rs 3 billion (US $6.5 million) have been invested by SAITM into the institution including a teaching hospital with 850 beds. The institute claims that its standards and facilities are superior to those of state-run medical universities.

In 2013, the University Grants Commission (UGC) of Sri Lanka granted degree-awarding status to the institution amidst protests from the Inter-University Students’ Federation (IUSF) and the Government Medical Officers’ Association (GMOA).

In July 2016, however, the Government of Sri Lanka suspended new admissions to the medical faculty of SAITM after a series of proposals were issued by a high-powered committee of professors following accusations about the standard of the education there.

Now a legal battle is brewing over whether to allow graduates of SAITM to work as doctors in Sri Lanka.

From July 2016, the Sri Lanka Medical Council has refused to register the first batch of 30 SAITM graduates on the ground that the MBBS programme followed by SAITM medical students does not qualify them to intern at hospitals.

Free Education Or Freedom Of Education

On January, 31, in a landmark ruling, the Court of Appeal of Sri Lanka directed the Sri Lanka Medical Council (SLMC) to grant provisional registration to the South Asian Institute of Technology and Management (SAITM) Medical graduates.

The Government Medical Officers’ Association (GMOA) vehemently protested this ruling and various student bodies, including the Inter University Students Federation (IUSF), held a series of protests in the Sri Lankan capital in the following week.

On February 7 the CEO of SAITM, Dr Sameera Senarathne was shot at by two unidentified gunmen riding on a motorbike, but escaped unhurt. The attack highlighted the polarisation surrounding the issue of private medical institutions operating in Sri Lanka.

The Sri Lankan Medical Council has filed an appeal in the Supreme Court challenging the January 31 judgement by the Court of Appeal.

Hilmy Ahamed wrote in a blog for Groundviews:

The state university students who benefit from taxpayers’ money through free education, and political opportunists have continued to protest the SAITM University’s medical degree programme as a threat to free education. They ignore or fail to protest over the hundreds of other degree awarding programmes undertaken by various private educational institutions. Why is it that only the private medical degree programme is seen as a threat to free education? The medical mafia of the GMOA, which holds the stick to ransom every time the Government takes any decision, which benefits the majority of the citizens of the country, are spearheading a campaign against the verdict of the Appeal Court.

And Devan Daniel wrote in the Echelon:

Three decades ago, Sri Lanka had a shortage of doctors, where for each doctor, there were 6,000 people in the population. Things have improved over the years, and today there is a doctor for every 1,100 persons in the country. But according to Fitch Rating Lanka, a credit rating firm, compared with the world average of 670 people per doctor, demand is growing for doctors and better medical care in Sri Lanka.

With the government’s limited ability to set up medical schools or expand existing ones, the private sector must play a role.

Earlier this month the Sri Lankan President Maithripala Sirisena criticised the recent protests and referred to the steps taken by the government to resolve issues with regard to the private medical college, including imposing better education standards on SAITM and taking over SAITM's private hospital.

A SAITM Solution: Take Over Medical & Allow Other Faculties To Continuehttps://t.co/ki0ktkIDbh pic.twitter.com/VnmjLwCH4e

In April, 2017 the government issued this letter describing their decision regarding SAITM students, including the requirement for a further period of clinical training and a mandatory examination under the joint supervision of the Sri Lanka Medical council and the University Grants Commission: 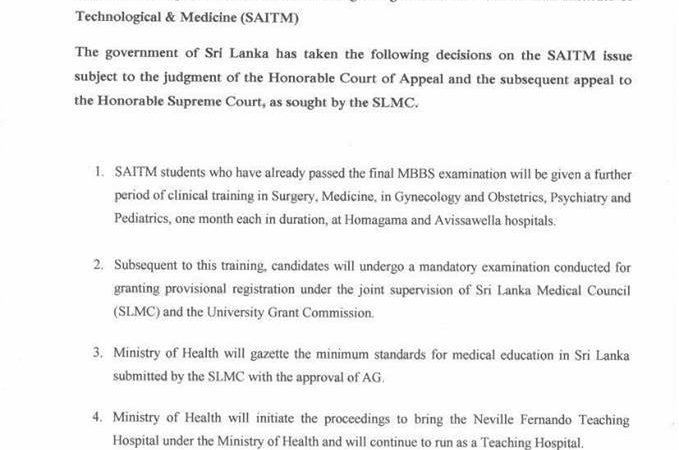 Caught in the crossfire

Amidst these battles that have dominated the mainstream and social media spaces, the main victim has been the students of SAITM and ordinary people. The Colombo Telegraph recently featured many SAITM students in their ‘My SAITM Story’ campaign, which appeared to be aimed at evoking empathy among readers. There is also a Facebook page titled Why do we need SAITM? that provides reasons as to why the institution needs to exist as a private entity. The page “Know SAITM”, on the other hand, focuses on exposing the institution, by claiming it is not up to the standard and is charging exorbitant fees.

Anti-SAITM leaflets being distributed aboard train this morning.

SAITM Death Trap and Your Future it says. pic.twitter.com/SthLh9ovia

It's important to note that highly rated medical schools like Harvard, Stanford, Johns Hopkins in the world are all private #SAITM #lka

@JustFabulous_S @DilanthaShamal Who said we didn't act ! Not in this scale obviously ! Remember SAITM is for ppl like us, & yet we're trying to stop it ! Find Y

I have lost all respect for #GMOA members & Drs in #lka holding public hostage with their selfish demands re #SAITM . #leeches

Dr. Ruvan Weerasing analyzed most of the opposing views in an Oped titled “To SAITM Or Not To SAITM – Is That The Question?” for the Colombo Telegraph and argued that a more rational debate over ‘whether or not the private sector can provide medical education’ was needed.

The SAITM authorities announced in a Facebook post that they are presently cooperating with the Government on the proposals that have been made and will obey the Supreme Court's decision.

It is left to be seen, if the Medical Mafia continues to deprive the right of a private medical education in Sri Lanka for our youth.