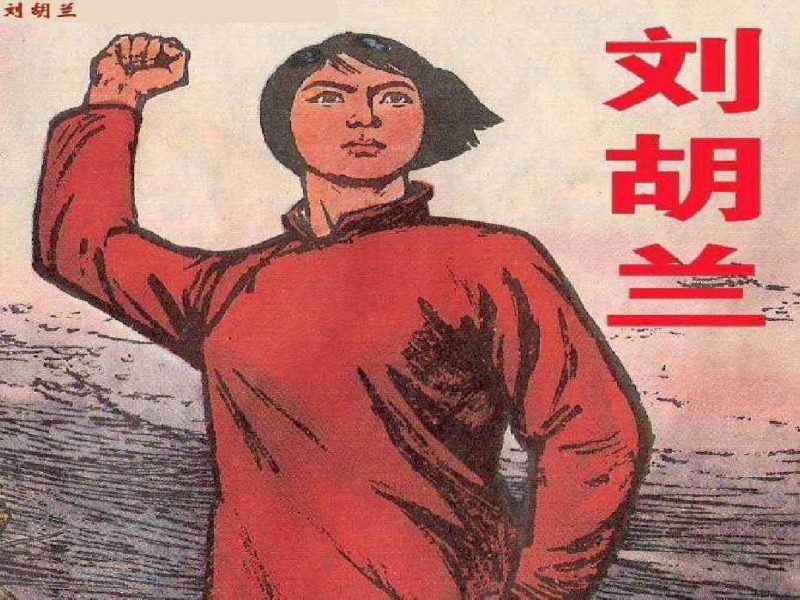 The boy was reading the textbook in a “crying tone”, a recital skill widely taught in schools, and ended up bursting into tears while his classmates burst into laughter. Below is a copy of the clip, via YouTube:

Reactions to the video were divided. Some were touched by the child's patriotic spirit, while others accused China's system of brainwashing.

Born in 1932, Liu Hulan participated in the Chinese Communist revolution when she was a 10-year-old and joined the party in 1946. She assisted the CCP in the assassination of her village chief in Yunzhouxi, Shanxi province and was beheaded by the Kuomintang soldiers in January 1947, when she was just 15.

The viral video was shared by a number of users on Weibo, and the following two reactions sum up [3] the differing views of the incident:

Brain-washing education. Nothing laughable. Very sad. Encourage a kid to die and praise it. That’s why our society is so inhuman.

Some said the story about Liu Hulan is encouraging teenagers to die and brainwashing. Vulgar people who live like bugs and dogs cannot understand the spirit of heroes who sacrificed themselves. She knew how to protect her fellows when she was just a 15-year-old. You are all grown up and all you can do is split people up. In your view, betraying your fellows is human nature, [you are] a bunch of traitors. The Chinese nation will rise without such a bunch of craps.

Liu Hulan joined the revolution when she was 10 and participated in the assassination of a village chief when she was 14. She was killed in 1947 when she was 15. Those she killed were all Chinese, all are fellows. Even during the revolution era, such a spirit should not be advocated. There is no justifiable reason to let an innocent teenage girl sacrifice herself for the so-called “revolution”. In civilized modern times, [such behavior] should not be encouraged. A 15-year-old girl should be reading, singing, eating snacks, carefree and treated gently by the whole world. My kids do not need to follow the so-called “heroes” who killed their fellow countrymen. They should learn how to line up, love the environment, recycle used items, act in a civilized manner, respect others, be confident and happy, be brave and kind, helpful to others and etc… all the basic behaviours. This would be genuine positive energy.

Similar debates happened two years back in the form of letters exchanged between a father and a school teacher. The Chinese Communist Youth League republished [6] the two letters on Weibo to facilitate the discussion.

The father’s letter was believed to be written by a liberal opinion leader and published anonymously back in April 2014. Below is a partial translation of the letter:

These people let a 13-14 year-old kid get involved in a life and death political struggle. While people of her age were chasing around in the grasslands, she joined a group of adults to help murder her village head. Later she was beheaded in the same brutal manner. I can not see any praiseworthy quality or ideal here. On the contrary, those strategists who praise her are shameful. I grew up in such a kind of struggle-and-hate education. Fortunately, I disentangled myself from that… now that my kids are being taught to follow Liu Hulan, my heart aches as if it were stabbed by a dagger. As a responsible father, my instinct is to protect my kids from such spiritual harm. I hope the teachers can understand and allow us to abstain from such activities.

The response from a ‘teacher’ is widely believed to have been written by a party ideologue. The letter argued that the younger generation should be prepared for the worst. The response featured an image of Japanese soldiers toying with the corpse of a Chinese baby with bayonets during the Second World War.

Below is a partial translation of the letter:

Although our kids are living in a peaceful era, no one can guarantee that they can enjoy peace forever. We want to stay away from violence and politics, but this is impossible, we can’t stay away from politics and we can’t stop wars and other painful incidents…Your kids not only need children’s tales but also heroes. She can have idols and know how to appreciate others. You think she should not follow Liu Hulan, but other heroes have occupied her world. Are these other heroes not political, not violent? How about the prince of slayer [7] or the spider man?

In the end, the letter criticized the father’s attitude as shameful:

Such thoughts are likely related to the recent cultural phenomenon of “stigmatizing heroes”. There is nothing wrong with letting our kids learn about their national heroes… Liu Hulan is a genuine heroine, she sacrificed herself at a young age. It was a tragedy of her time but we can’t simply denounce her and ask our kids to “stay away”…