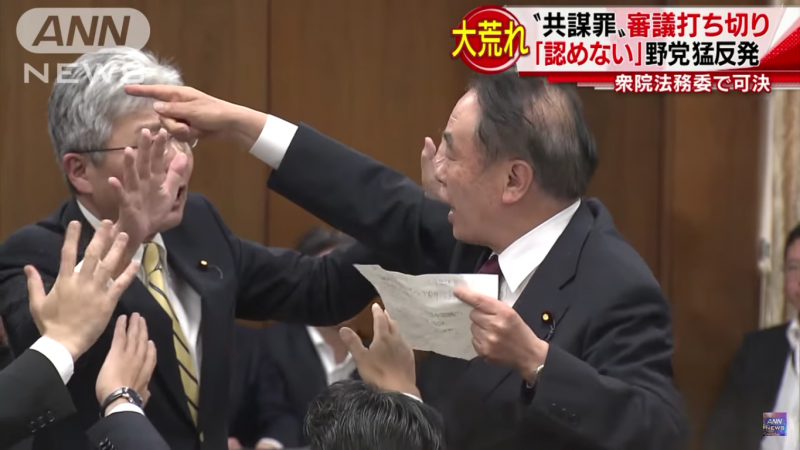 Despite public protests, resistance from opposition politicians and international condemnation, Japan's ruling coalition ended committee discussions on a controversial anti-conspiracy bill May 19, paving the way for its passage into law before the Japanese parliament breaks for summer next month.

There are fears the vague nature of the bill, which will cover nearly 300 crimes, will erode personal liberties in Japan once it is passed, providing authorities with broad surveillance powers, and leaving the question of who can be monitored open to interpretation.

Japan's ruling coalition, headed by Prime Minister Abe Shinzo and the Liberal Democrats, has tried for years to revise Japan's existing Act on Punishment of Organized Crimes and Control of Crime Proceeds. The goal, according to the Japanese government, is to join the United Nations Convention Against Transnational Organized Crime in time for the Tokyo Olympics in 2020, at a time when threats to national security are perceived to be increasing.

Japan's last large-scale domestic attack was carried out in 1995, by the group Aum Shinrikyo.

A Q&A published in the English-language version of Nikkei Asia explains:

Legislation proposed by past governments sought to make punishable acts of conspiring to commit serious crimes as a “group.” Such a broad definition sparked fear that harmless situations — say, co-workers talking at a pub about beating up their boss — could run afoul of the law.

This time, the government has dropped the word conspiracy and adopted the label of plotting to commit “terrorism” and other organized crimes.

Despite these changes, members of the House of Representatives Committee on Judicial Affairs, which has been debating and making changes to the bill since April 18, have expressed concern “ordinary people” are still in danger of coming under investigation on suspicion of conspiracy if the bill was enacted in its current form.

The bill, which would punish “preparations for terrorism or similar acts,” is said to only apply to “terrorist groups and other organized criminal groups.” But the definition of “group” is vague. According to the Nikkei Q&A:

A group is defined in the bill as two or more people, and the proposed charge would apply to those who plan one of the many listed offenses, in which at least one member makes specific preparations to carry out the offense. Punishment would be meted out to all members of the group, regardless of whether they were the one who made specific preparations. The list of offenses was narrowed down from the original 676 to 277.

Despite the implications the bill has for civil liberties in Japan, committee members have also expressed concerns about Justice Minister Kaneda Katsutoshi's understanding of basic legal concepts.

DP lawmaker Seiji Osaka on Justice Minister Katsutoshi Kaneda: “He can’t answer the most basic question regarding the revision.” https://t.co/srFyVju8TP

(Justice Minister) Kaneda said in April that “objective evidence” will be a major factor in deciding whether someone is plotting a crime, providing as an example: “If you walk under cherry blossom trees with beer and a lunch box, that’s considered as hanami (cherry-blossom viewing). But if you do so carrying a map, binoculars and a notebook, that might be your attempt to inspect a crime scene beforehand.”

In response, a committee member from an opposition party said, “You can still carry binoculars for bird-watching … That’s no clear criterion.”

Despite the concerns of committee members, on May 19 the ruling coalition used its majority to end debate in the  committee, and sent the the bill to Japan's parliament where the government will use its majority to pass it into law before the June 18 recess.

Like other controversial pieces of legislation passed by the Abe government, the bill has generated criticism both inside and outside of Japan.

Tokyo Shimbun reported that Joseph Cannataci, United National Special Rapporteur on the right to privacy, has been critical of of the bill:

Notable article: How there are even international concerns about the new conspiracy bill. http://www.tokyo-np.co.jp/s/article/2017052090065838.html

Reuters reported that Japanese spokesperson Suga Yoshihide tried to reassure the public about the intent of the legislation, saying it would would not target the “legitimate activities” of labor unions or other civil groups.