Have You Heard of ‘Cash for Keys'? Many Elderly Immigrants in Los Angeles Have—and Are Fighting It. 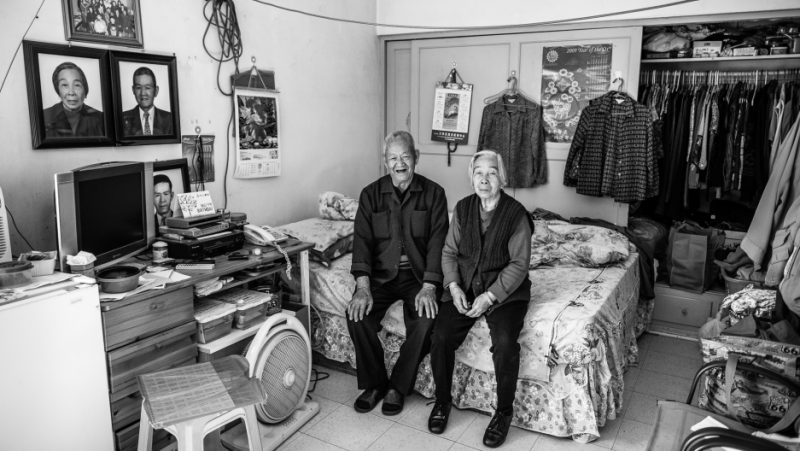 Yue Chang Zhou and his wife were asked to leave their apartment in a Los Angeles single-room occupancy building after it was sold last year. With a small fixed income, it’s unlikely that they could find an equally affordable housing option in LA, and the wait for subsidized senior housing can take several years. Credit: Roberto Guerra/PRI

This story by Ruxandra Guidi originally appeared on PRI.org on May 15, 2017. It is republished here as part of a partnership between PRI and Global Voices.

In cities around the US, rents are rising fast.

The technology boom and the housing rebound are transforming urban areas in many parts of the country, driving up the cost of living and forcing low-income residents out of their longtime homes. Among those most affected are immigrant seniors, like 86-year-old Ying Ya Yang, who lives out of a single room that’s only 100 square feet.

For over 15 years, she has slept, cooked and eaten in this small and cramped space. But she says she likes it that way.

A retired garment worker from China, Yang depends on a Supplemental Security Income of $800 a month. Her rent is $350 a month, and she is fully aware that it would be hard for her to find something cheaper even here in Lincoln Heights, a working-class immigrant neighborhood close to downtown Los Angeles.

“I’m very independent and self-sufficient,” she says. “My kids offer me money but I don’t take it, I like to take care of myself. And I like it here because it’s perfect for me: I can take the bus anywhere. You could say I want to stay here until the end of my days.”

One day last spring, however, Yang and her next-room neighbors, the Zhous, had some unexpected visitors: a group of Cantonese-speaking housing advocates. Yue Chang Zhou is visibly upset as he explains their situation to them.

“They came and basically told us, ‘You will have to move in six or seven months, and we’ll be paying you six months of rent and you can leave.’”

The “they” Zhou is referring to is probably the building’s new owner. He’s never actually met him, but he heard from some of his former neighbors that the owner had new plans for the property. The younger neighbors took the six months’ rent — about $2,400 — and left.

But no amount of money will make the Zhous or Yang want to leave at this point in their lives. And this response from seniors is very common.

“A lot of seniors want to age and die in their home,” says Phyllis Chiu, a retired schoolteacher who volunteers in immigrant neighborhoods like Lincoln Heights and LA's Chinatown, working with a group called Chinatown Community for Equitable Development. It’s one of a handful of volunteer groups in the city that go door-to-door and speak to tenants in their native language about their housing rights. 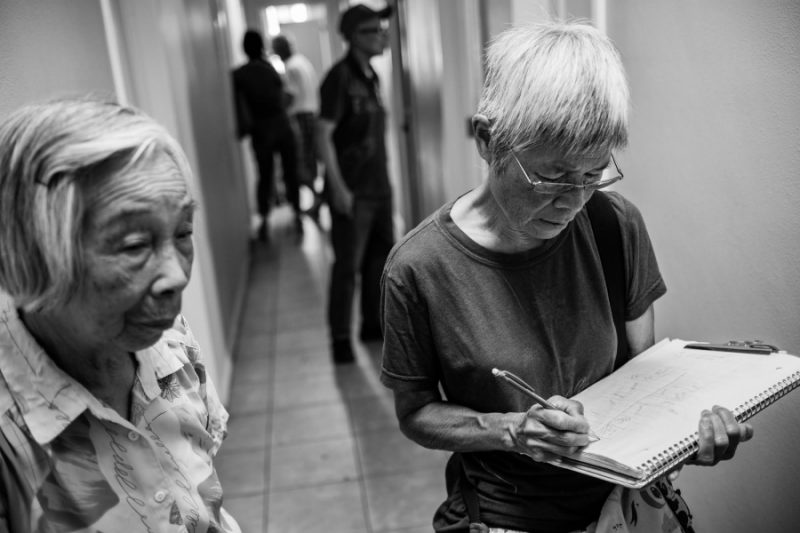 Downtown LA is booming, with new condos and restaurants opening up. But the growth is bringing prices up in nearby ethnic neighborhoods where immigrants have been settling since the 1950s and '60s.

According to Chiu, a lot of people she wants to help are Asian Americans who are afraid to challenge management, especially in English. Without a fight, they get displaced.

Steven Wallace of UCLA's Center for Health Policy Research is concerned about those who are currently being displaced. He calls them the “hidden poor” — people with an income that is above the official federal poverty level, yet below what they need to make ends meet.

In LA, an estimated 200,000 elderly people currently fall into this category, and they’re often Latino, African American and Asian older adults who live alone or with only a spouse.

“In the '30s, we built millions of units of public housing around the country. In the '60s, there was Section 202, which built tons and tons of seniors’ buildings,” Wallace says. “Nowadays, it’s just very hard to get the financing, even if you’re a nonprofit organization and you want to build low-income housing, subsidized housing, senior housing. So something more needs to be done.”

The demand for housing is likely to continue to grow. But with that, so is a practice known as “cash for keys,” which basically means landlords are offering money to their tenants so they can move out sooner than the law requires.

Only four blocks away from where Yang and the Zhous live, another old building sat half-empty. Among its last few tenants are seniors, like 80-year-old José Viramontes. Originally from Mexico, Viramontes has lived here with his partner for 36 years.

A few months ago, the couple was approached by a new landlord. He asked them to leave. Even though they don’t speak English, the couple signed a document saying they would accept $1,500 each in order to vacate.

But then a housing advocate showed up at their doorstep, willing to help.

“It was a miracle, the kind of miracle that we didn’t see coming at all,” says Viramontes. “Fortunately, here we are, and now we’ll just have to find a new apartment.”

Viramontes found a pro-bono lawyer who will take their case to court. They allege that their eviction notice was illegal and that they qualify for thousands of dollars in relocation assistance — up to $20,000. But finding a cheap new apartment won’t be easy. Viramontes is blind and his partner, Malena, is physically disabled.

“As a last resort, if we can’t stay in LA, we’ll go south to Tijuana. Because it’s gotten too expensive here,” Viramontes says.

Ruxandra Guidi's story was made possible with support from The Eisner Foundation and KCRW.