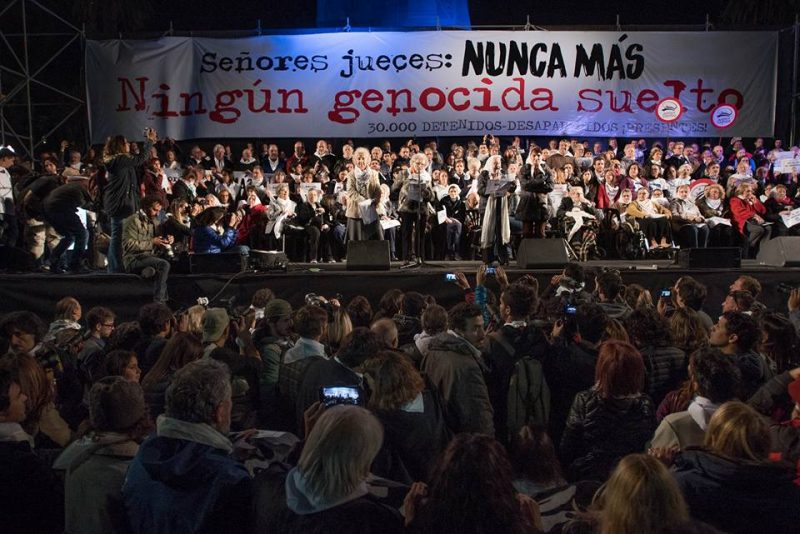 Main act of the protest against the 2×1 for genocide accused ruling in the Plaza de Mayo in Buenos Aires. Photo Nuevo Encuentro, shared publicly on Facebook.

Argentines marched in cities across the country on May 10, 2017, to repudiate a Supreme Court decision regarding a measure known as “two for one” (2×1) that would reduce the sentence of a serviceman convicted of crimes against humanity committed during the 1976-1983 military dictatorship in Argentina.

The ruling refers to an old convention of Argentine criminal law that was intended at the time to reduce the prison population. It was established so that those who were detained without trial for more than two years would have the right to compensation for the delay in the form of double time served for however long they were held without conviction.

For the people protesting against the Supreme Court's ruling, it sets a precedent that could result in many of those who were members of the dictatorship's repressive forces being released early. The following video by Emergentes summarizes what the ruling means for Argentines and the reasons they reject it:

The people protesting are also a firm and symbolic response to what we do not want to happen ever again.

On May 3, 2017, the majority of the Supreme Court ruled in favor of Luis Muiña, who was convicted of “illegal deprivation of freedom aggravated by the use of violence or threats.” In a country where the wounds of the dictatorship have not yet healed, a ruling like this is a low blow in the eyes of those who have spent more than four decades fighting for justice.

The reaction of human rights organizations, political parties and citizens was swift, both in the streets and on social media, where the indignation was palpable in tweets using the hashtags #Noal2x1 (No to 2×1) and #Noal2x1aGenocidas (No to 2×1 for genocide criminals):

#NOal2x1aGenocidas… This country can’t take any more… What else is coming!? Please, how much injustice!

Image: Not one genocidal criminal on the streets. No to the 2X1 law. We will protest at the Plaza de Mayo.

Tweet: #NuncaMas [Never Again] #NoAl2x1AGenocidas This Wednesday everyone will go to the Plaza. FOR THE MEMORY OF THE 30,000 FELLOW [ARGENTINES WHO DIED]!

Image: Let's defend our history. Not one genocidal criminal on the streets.

Tweet: This Wednesday we mobilize together with human rights organizations to prove that this country is standing up! #Noal2x1 #NoAl2X1Genocida

The general slogan that encompassed the call to action was clear — “Neither forgetfulness, nor forgiveness, nor reconciliation” — and white handkerchiefs, the symbol of the Mothers of the Plaza de Mayo association of mothers whose children were disappeared during the dictatorship, dominated the mobilization.

Here are some images of the massive march shared by the collective Emergentes: 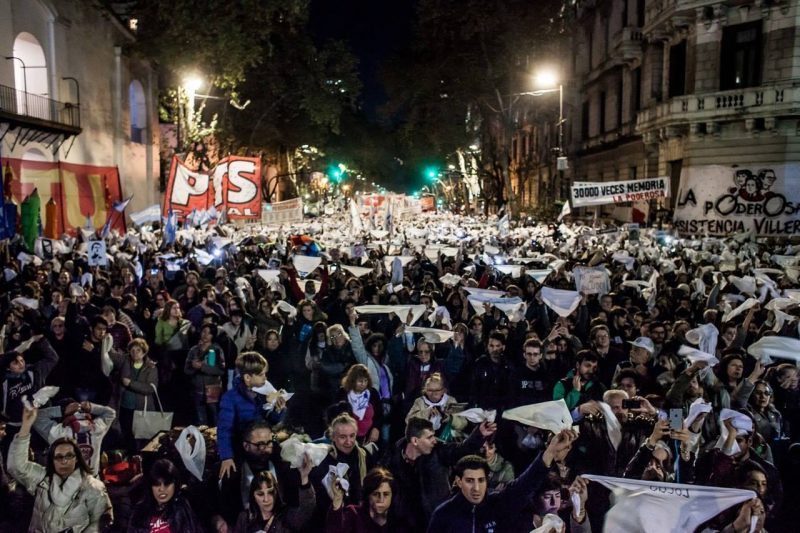 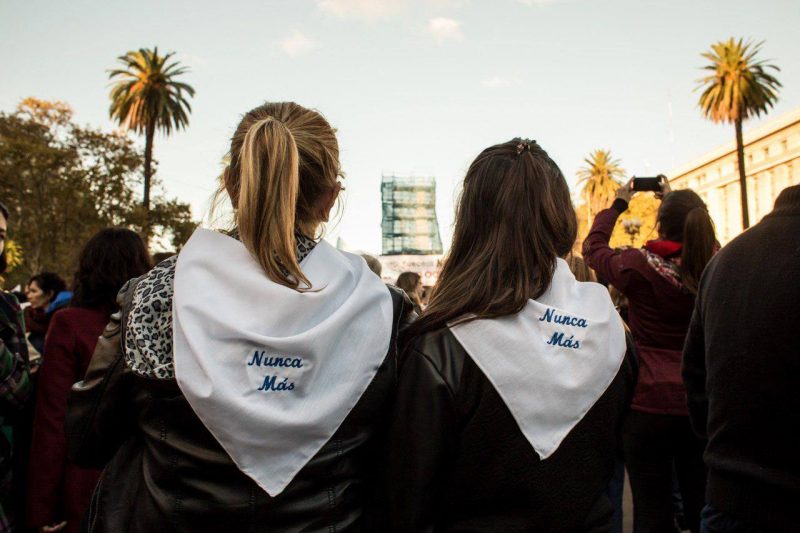 “Never again.” March in Buenos Aires against 2×1 for the genocides. Photo: Emergentes, used with permission. 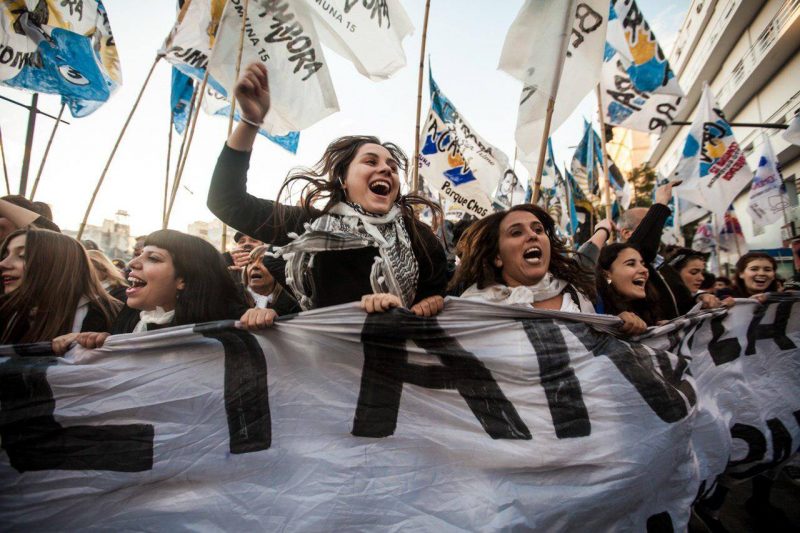 March in Buenos Aires against 2×1 for the genocides. Photo: Emergentes, used with permission. 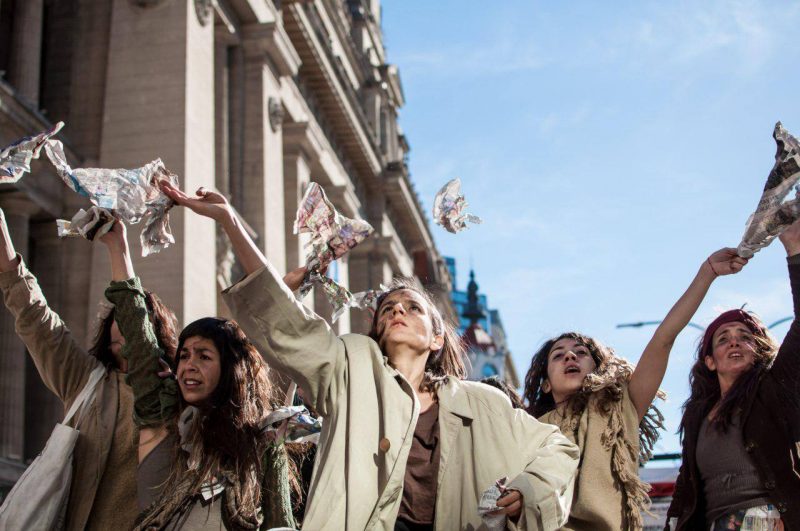 Symbolic representation of the victims of forced disappearance during the dictatorship. Photo: Emergentes, used with permission.

Secretary of Human Rights Claudio Avruj denied any interference of the Executive Branch in the Judiciary, and stated that it would be a mistake to confuse the court's decision with a decision of the government: “The first thing we proposed was respect for the independence of the branches of government. […] This has nothing to do with the unwavering commitment to the fight against impunity.”

On the same day as the march, Argentine President Mauricio Macri spoke out against the 2×1 ruling in a move that many considered “took too long to happen.” Meanwhile, the Senate issued a law, previously approved by consensus in an emergency session of the Chamber of Deputies, which limits the scope of the ruling and restricts its application in cases of people convicted of war crimes and genocide. 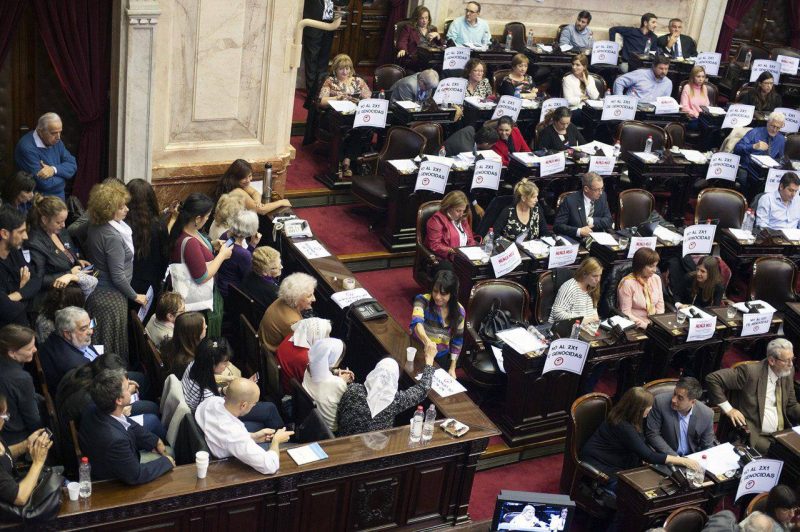 The Grandmothers of Plaza de Mayo in the Senate session where the 2×1 decision was ruled inapplicable for those convicted of crimes against humanity. Photo: Emergentes, used with permission.

Despite the quick issuing of the law and the clarifications of the secretary of human rights, this controversial week does not bode well for President Mauricio Macri’s public image in the face of upcoming legislative elections in October 2017. It only adds to the general discontent within an important sector of Argentine society that already disapproves of several state policies enacted during his 16-month administration.