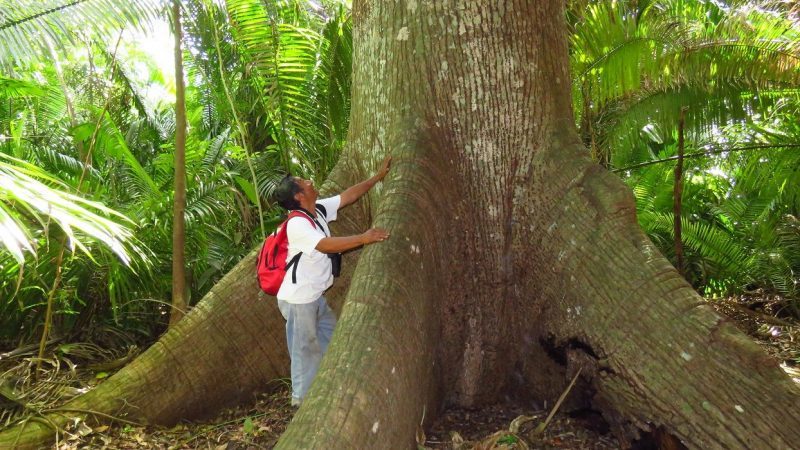 On August 21, 2007, Hurricane Dean ripped through the Mexican city of Bacalar with winds approaching 300 kilometers (186 miles) per hour. According to a report published by Mexico’s Secretariat of the Interior and the National Center for Prevention of Disasters, the storm caused more than $210 million in damages.

Just before the storm, the community of Noh Bec had almost finished with the first authorized cuts as part of a forest management program launched in 1999 by the government.

Following the hurricane, the Secretariat suspended its program and approved short-term permits. Noh Bec also lost its forestry certification from the “Smart Wood” organization, which allowed the community to export its lumber to the United States and Germany. Meanwhile, the rainforest was left in critical condition.

Three years later, Noh Bec was still suffering. “Timber started to be sold at the prices they could managed to get, and [this made] prices fall a lot,” recalls Abraham González, the communal land’s forestry director.  “It was necessary to unite to standardize the prices for the wood.”

Article 27 of the Mexican Constitution, passed in 1917, ceded land ownership to poor farmers and indigenous communities through the creation of two fundamental forms of social property: communal land and communities.

The shareholders of communal lands manage the “civil property” on the land, but they cannot sell, rent, mortgage, or offer it as collateral in credit applications. The system avoids granting full land ownership rights, fearing that it would lead to the manipulation of poor farmers.

The government maintained centralized control of the rainforests until 1940, when concessions were granted to private companies for the exploitation of forest resources. By the late 1970s, the Mexican forestry sector landed in crisis after over-exploiting its forests. In 1986, the government ended its concessions to private companies, returning the forest resources to the communities and communal lands.

An estimated 2,300 communal lands and communities in Mexico — of a total of 8,400 — are allowed to use wood from their forests and rainforests. Over the past 25 years, more than 80 percent of the country's temperate and tropical forests have been managed by rural communities and indigenous populations, allowing them to decide on commercial timber production.

José Antonio Arreola, a forestry technical adviser, explains that “each communal land is managed independently, but they are part of Alianza,” because “in a single communal land, we cannot achieve better prices for our wood.”

An owner can earn up to 4,000 Mexican pesos a month as a basic salary. If they are forestry technicians, it can reach up to 14,000. We have a policy of employment that favors the owners, then their children and relatives, then the members of the community, and finally, foreigners or people outside the village.

Argüelles also talked about how the council deals with the shareholders of communal land who do not want to take over common resources:

Since its inception, Alianza has incorporated eco-tourism and carbon capture projects, and has developed techniques for adapting agriculture to climate change, as Argüelles explains:

We are the main drivers of rural community conservation. That’s what we live from.

The longer, original version of this text can be found here, along with other articles by Elaine Díaz, who received a scholarship from the Earth Journalism Network for coverage of COP 13.