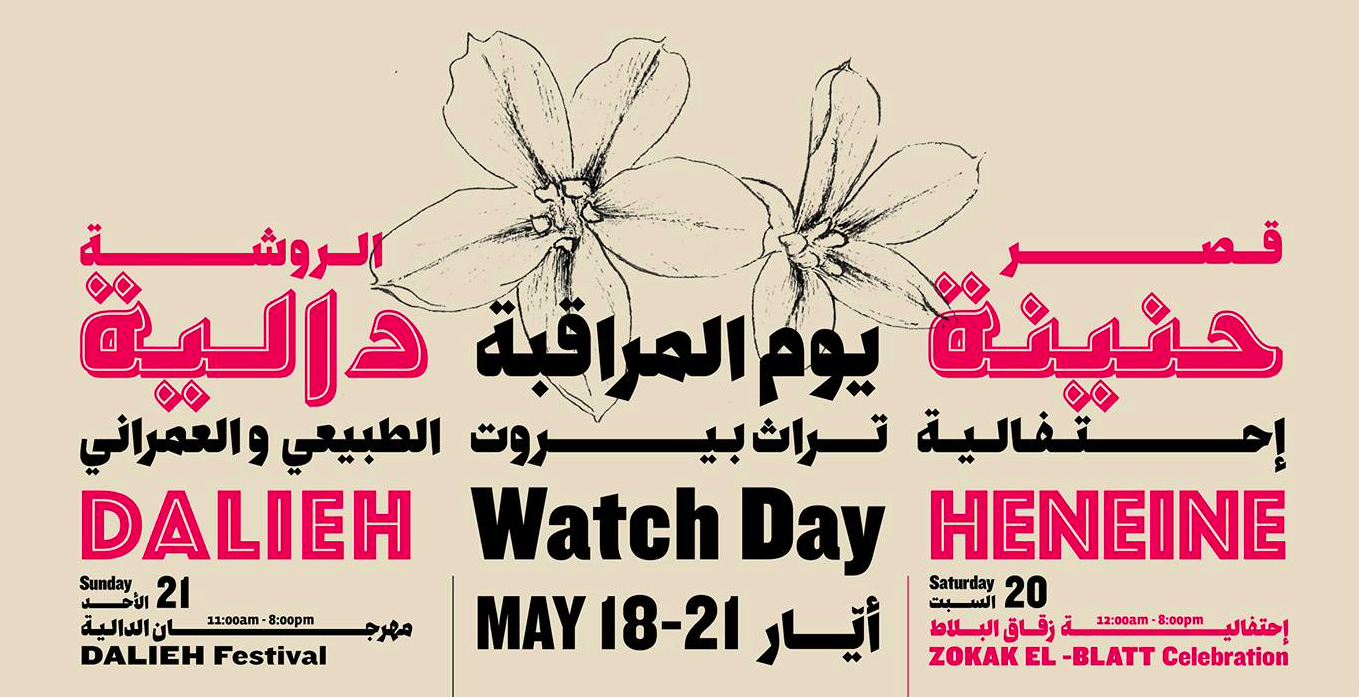 Section of the poster being used for the Heritage Watch Day. Full photo. [1]

In the years following the 1975-1990 Lebanese civil war, Beirut witnessed a privatization and development frenzy that altered the shape of the city, from its coast to the hills surrounding the peninsula.

The period, known as the ‘reconstruction era’ and often referring to the 1990s but which continues to this day, has seen many of Beirut’s historical landmarks threatened with destruction to make place for ‘redevelopment’.

Academics have called this an of act of ‘spatial erasure’, arguing that “the spatial erasure initiated by war destruction is consolidated during postwar reconstruction”, in the words of Marwan Ghadour and Mona Fawaz [2]. Bruno Marot and Serge Yazigi even went further and argued that [3] “the rise of market-led urbanism, a lack of proper urban planning and the far-reaching sectarian polarisation” could sow “the seeds for future conflict”.

In response, activists in Lebanon are organizing a Heritage Watch Day [4] to bring international attention to a number of threatened historical sites as well as encourage locals to actively defend them. This time, two sites will be the focus: the Hneine Palace [5] and the Peninsula of Dalieh [6].

The Hneine Palace is one of the most remarkable buildings in Zokak el-Blat, once a bourgeois garden district outside the old city walls of Beirut. After the outbreak of civil war in 1975, the ground floor became home to displaced families, who used makeshift walls to subdivide the large spaces.

By 1990, these last occupants had been evicted and the palace now lies empty and decaying. The building has multiple owners, without clear agreement about its future, while the pace of real estate development in the area has been intensifying.

As for the Peninsula of Dalieh, it is an important landmark on the city’s coastal promenade with rich social and cultural value. The open rocky area along the seashore has been used for hundreds of years by working-class families for daily recreational activities like swimming and religious festivals, as well as farming and fishing.

There has been a long tradition of public access to the Beirut shoreline, beginning under Ottoman rule (16th century to 1918) and continuing through the French mandate (1920-1943) with laws prohibiting development on the coast.

But since the 1960s, a series of legal changes have removed most of the protection for the coastline, permitting almost unchecked development.

This opportunity has been seized by major real estate investors, who have managed to gain ownership of almost the entire site. The current owners now propose to build a private beach resort, and the initial phases of this work have included demolishing fishing shelters and fencing off the site to prevent public access.

The Heritage Watch Day is being organized by two groups.

The Save Beirut Heritage [7] group, a volunteer-led NGO that works for the collective surveillance of heritage buildings and acts as a whistle-blower whenever an illegal demolition is suspected, applied to get the Hneine Palace on the World Monuments Fund [8]’s (WMF) Watch List [9]. The WMF is an international private nonprofit organization [10] “founded in 1965 by individuals concerned about the accelerating destruction of important artistic treasures throughout the world.”

And the Civil Campaign to Protect the Dalieh of Raouche [11], a coalition of individuals and non-governmental organizations who share a strong commitment to the preservation of Beirut’s shared spaces, ecological and cultural diversity, followed with the Peninsula of Dalieh. 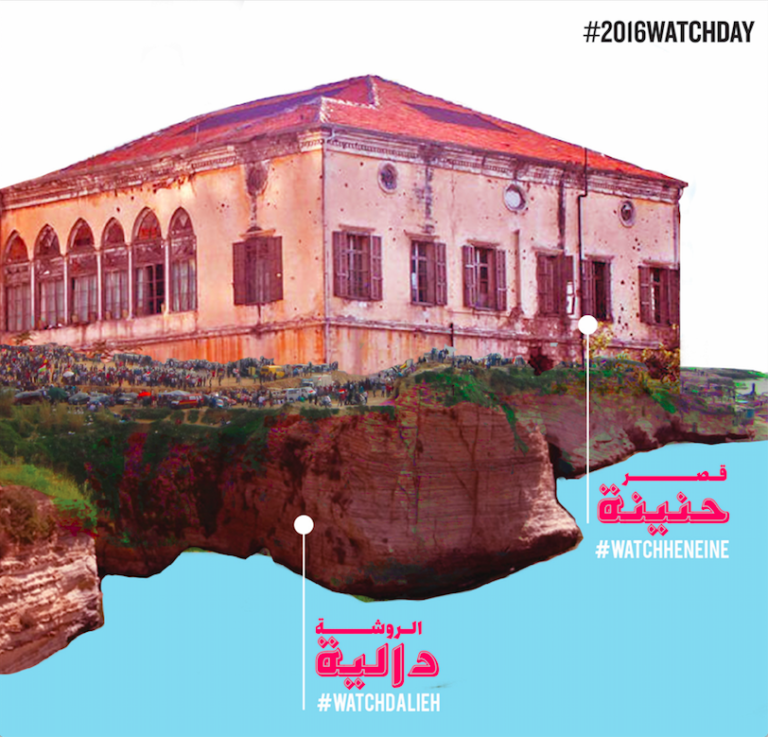 The Heritage Watch Day, which will actually take place over a number of days between May 18 and May 21 [4], will include talks and public discussions, site-specific artistic interventions, exhibitions, school workshops and site visits, concerts, food markets and street fairs.

The program aims to recognize citizens and city users as active partners in the battle to save the city’s heritage and to enable them to voice their concerns about how market-led developments and laisser-faire governance is changing the character and identity of Beirut. 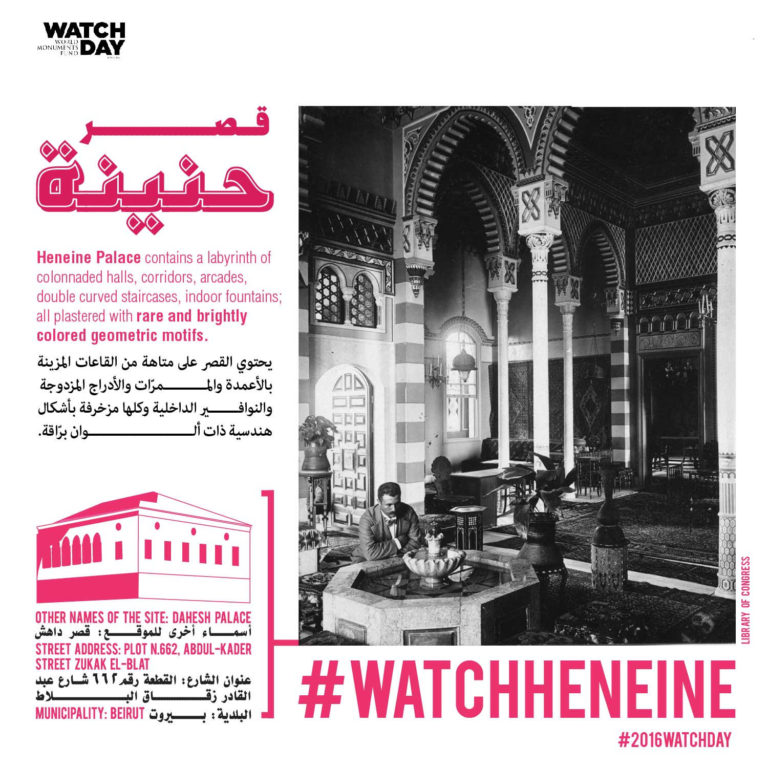 Both sites were put on the list along with 48 other endangered sites worldwide. The hope is that this will bring attention to other heritage sites being threatened.

Places like the Red House [12] in Beirut's Hamra area, which reportedly dates to the 18th century, La Maison Rose [12], or the Rose House, one of Beirut's oldest mansions dating to the 19th century, Ramlet El Bayda [13], Beirut's last public beach, the Laziza Brewery [14], also known as La Grande Brasserie du Levant, one of Lebanon’s first major factories and reportedly the oldest brewery in the Middle East [15], Horsh Beirut [16], the city's largest green space, and the ancient ruins [17] found in the so-called Beirut Digital District in the center of the capital are some examples of the city’s disregard of its cultural assets in favor of massive urbanization and real estate development.

As Florence Massena explained [18], they are “symbols of the lack of urban planning in the Lebanese capital, where heritage succumbs to money”.

The Red House was removed [12] from “the list of protected buildings” in February 2017, just seven months after being put on the list. La Maison Rose is also facing [19] an uncertain future after a British artist managed to briefly bring it back to the media spotlight. It was opened to the public at the end of 2016 for a couple of months. As for the Laziz Brewery, its demolition started in [20] March of 2017 to “make way for a luxury apartment complex”.

Meanwhile, Horsh Beirut is being threatened [16] today “by the ungoing construction of a field hospital inside the park” despite being classified as a natural site since 1940. The park originally covered 1.25 million sqm of Beirut but is now reduced to a triangle of 330,000 sqm. It was first opened to the public [21] in September of 2015 after a 20-year closure.

As for the ancient ruins, they were only recently uncovered and seem to date to the Roman period. Habib Battah from the well-known ‘Beirut Report’ blog managed to get a glimpse of them and was subsequently physically assaulted by developers [22] and verbally threatened by a high-ranking government official [23] for publishing pictures of the ruins.