Three Decades and Several Films Later, a Creative Translation of ‘Alien’ Endures in the Balkans

Banner for the upcoming “Alien” film in Macedonian, reading “The Eighth Passenger: Covenant. In cinemas starting May 18. Tickets on sale.”

The announcement that another installment of the “Alien” franchise will soon hit theaters has reignited a longstanding linguistic debate among science fiction and movie fans in Western Balkans.

When the first movie in the series appeared in 1979, rather than using a word that means “stranger” or “extraterrestrial” in the local languages, the distributors in Yugoslavia, Hungary and Poland translated the title as “The Eighth Passenger,” referring to the fact that the titular alien was a stowaway on the spaceship populated by seven crew members. 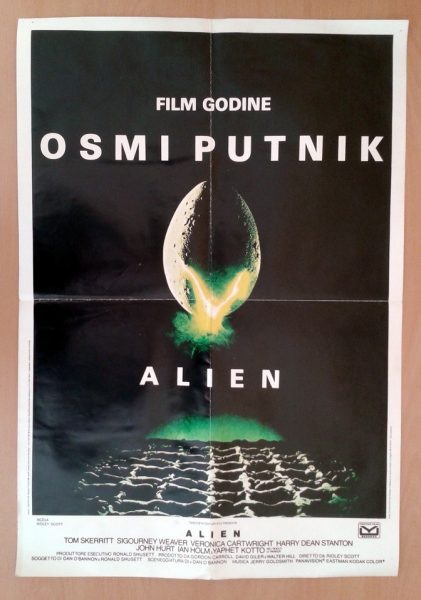 Scan of the original 1979 Yugoslav movie poster containing both the Serb-Croatian translation and the original English title, with the remark “movie of the year.” Author anonymous.

This wasn't true in all the countries of the region, however. Transliteration or local variations of the word “alien” were used in Albanian, Bulgarian, Czech, Slovak and all languages of the former USSR.

And the Polish title, “Obcy – ósmy pasażer Nostromo,” used a combination of both approaches, in addition to adding the name of the spaceship at the end, resulting in the rather lengthy “Alien – The Eighth Passenger of Nostromo.” The Hungarian title, “A nyolcadik utas: a Halál,” is also a kind of spoiler, meaning “The Eighth Passenger: Death.”

Across the former Yugoslavia, “The Eighth Passenger” stuck and was used in all the sequels that followed over the next 30 years, including the upcoming “Alien: Covenant.”

Periodically, people from the region have returned to the controversy of the translation, either considering it a very creative interpretation or dismissing it as improper or obsolete.

This is reflected in the definition found at Vukajlija, an online dictionary of Serbian slang. The entry for “Osmi putnik” contains both praise and the question of “how come they didn't count the cat?” (In addition to the seven crew members, there was also a cat on board the spaceship, which apparently wasn't included in the count if the alien was the “eighth passenger.”)

In the sea of bad translations and interpretations of the titles of foreign films to Serbian, The Eighth Passenger is a rare case of good movie title. #Alien

Again, they make me angry when they say that the #Alien was the “eighth passenger” – Hello! There were 6 humanoids, one android, the cat, and then the alien.

Then there's Alien or Osmi Putnik which literally translates to “The Eighth Passenger”. What was the sequel translated as? More Passengers?

Fans in Macedonia have shared their mixed feelings about the title's translation:

I cringe a lot when they write the Eighth Passenger instead of Alien on the cinema tickets. A lot!

I don't care what anyone else thinks, the Eighth Passenger is a genius title for the film, 50 times better than the original.

The film had an influence on Yugoslav pop culture beyond the sphere of science fiction. “Osmi putnik” was the name of one of the top heavy metal bands of the former federation, founded in 1985 in Split, Croatia. The band's popularity might had been a factor in the survival and the brand recognition of the translation. One of their best-known songs is “Glasno, glasnije” (Make it loud! Make it louder!).

Even political debates use references to the movie. One Macedonian Twitter user quoted law professor and former politician Ljubomir Frčkoski who used “The Eighth Passenger” in a derogatory manner when discussing the destructive role of the country's outgoing ruling party in the period right after the December 2016 elections: