As WHO Director-General Election Nears, Ethiopia’s Candidate Is Accused of Cholera Cover-Ups 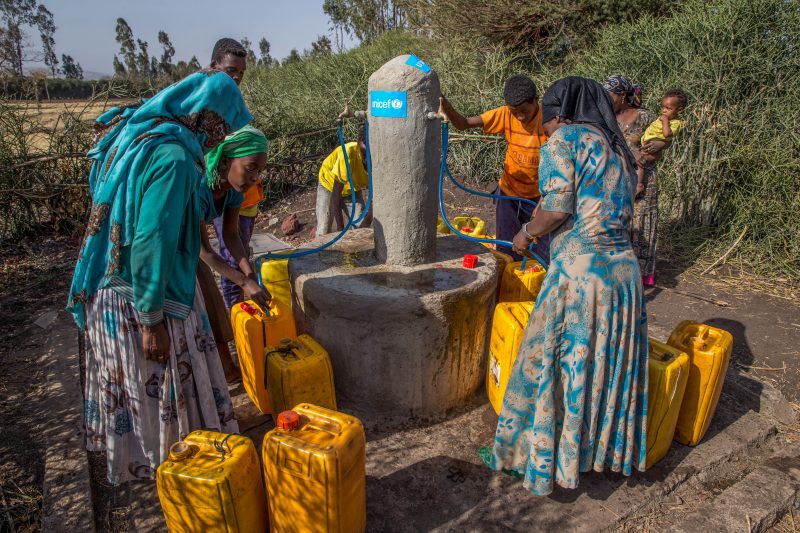 In January 2017, when Ethiopia’s candidate for director-general of World Health Organization, Tedros Adahanom, stormed to the top of the final three candidates — beating out six other candidates — it was a high time for Ethiopia’s government.

Although Adahanom had faced ferocious opposition from his fellow citizens, he has largely made it through unscathed, giving a propaganda victory for Ethiopian state media. With his well-funded campaign, Adahanom has traveled to more than 120 countries, and his supporters felt confident that his election is all but a matter of time.

Then on May 13, the New York Times ran a story reporting that a “prominent global health expert” had accused Adahanom of concealing three cholera epidemics from 2008 to 2011 during his tenure as Ethiopia’s health minister. Lawrence O. Gostin made the allegations; he is an informal adviser to one of Adahanom's opponents in the director-general race, the UK's David Nabarro, but Nabarro told the New York Times that he had not instructed Gostin to make the accusations on his behalf.

Finally! The @NYTimes calls out @WHO DG candidate @DrTedros for covering up cholera epidemic using the euphemism of Acute Water Diarrhea. https://t.co/ZdLSNAFqbH

Abebe Gellaw, a prominent Ethiopian journalist in the diaspora, wrote on Facebook that it was only the beginning:

New York Times has a hard-hitting article on Tedros Adhanom. Tedros says it is a “smear campaign”. But the revelation is just the tip of the iceberg. A lot more will come out in the next few days… 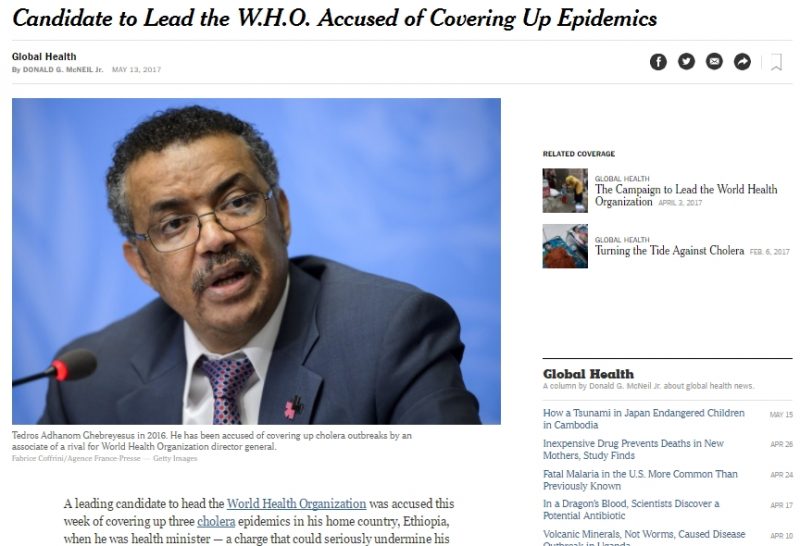 A screenshot of the New York Times article on Tedros Adahanom. Click the image to read the story on nytimes.com

The explosive article made Adahanom and his supporters defensive while it created a sense of vindication for his opponents. Adahanom has denied the allegations. A former Reuters journalist who wrote Ethiopia's cholera outbreak in 2009, however, responded on Twitter that the accusations as detailed in the New York Times story was consistent with what he had seen.

In 2009, when Tedros was health minister, I obtained minutes of an NGO/UN meeting, in which a cholera outbreak was acknowledged.

NGOs, UN and government refused to comment. And UN officials pressured me not to run story. Full story here: https://t.co/Ixtu373nUs

At the time, UN officials regularly complained in private that lack of acknowledgement from govt stopped them getting more aid in.

In responding to the allegations, Adahanom accused Nabarro's camp of engaging in smear campaign with imperialistic intentions. Pro-government groups took this line of accusation even further, claiming Nabarro is working with Ethiopian opposition groups that are labeled as “terrorists.”

Since April 2014, a popular protest movement in Ethiopia has challenged the government, which in turn has responded brutally. According to Human Rights Watch, at least 800 people have died, and thousands of political opponents and hundreds of dissidents have been accused of terrorism. Since October 2016, authorities have imposed some of the world’s toughest censorship laws after it declared a state of emergency.

Now, the tactic of calling opponents “terrorists” has spilled over Ethiopia’s borders and might create blowback for Adahanom as his record is examined critically by international media.

The health ministers of WHO member states will vote for the new director-general on May 23, 2017.