Bangladesh: Where Heavy Metal Dies at the Doorstep 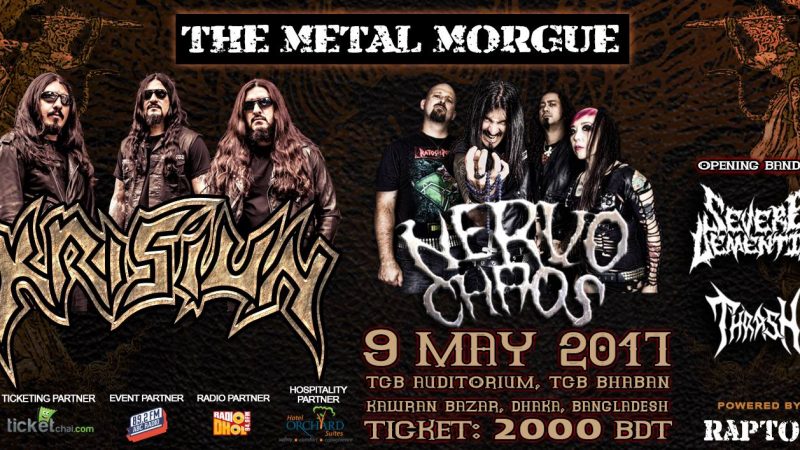 Heavy metal fans in Bangladesh were heartbroken as Brazilian death metal bands Krisiun and NervoChaos were not allowed to perform in Bangladesh in their sold out May 9 concert in the capital Dhaka.

The concert titled Metal Morgue was scheduled to be held in the TCB auditorium at Kawran Bazar as a part of the international band's Asia tour and was also set to showcase some local bands. The organizers obtained permission for the event from the Ministry of Cultural Affairs according to the rules and notified the Home Ministry for security clearance. But on the afternoon of May 8 they were informed that the concert would not be taking place for “security reasons”. The police did not divulge the nature of the security concerns.

Meanwhile, the Bands were already on the way to Bangladesh from Indonesia via Malaysia, arriving on Tuesday early morning at around at 1:30AM Bangladesh time. Upon arrival, the crew members of the metal bands Krisiun and NervoChaos were not allowed beyond immigration and their passports were confiscated. According to reports they were asked why they had arrived despite having their clearances revoked.

The organizers requested they be placed in a hotel, leaving their equipment in the airport before flying out the next day, but the police were reportedly apprehensive about that arrangement, fearing the groups would perform with borrowed equipment. The standoff lasted approximately 10 hours and they were released following an intervention by the Brazilian embassy. 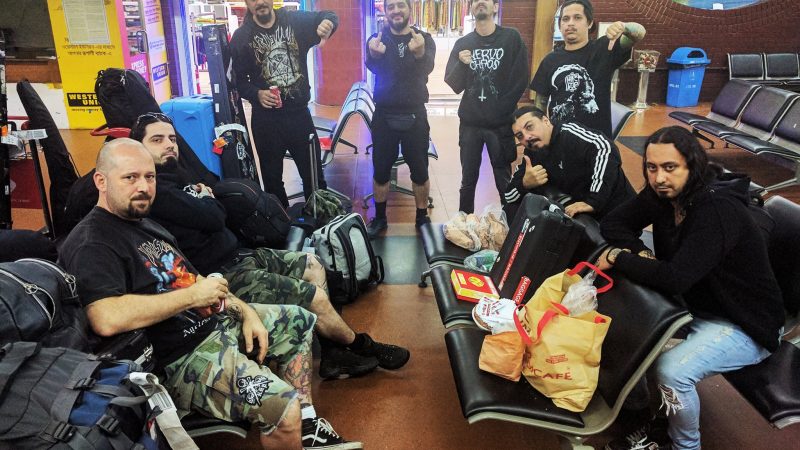 The band members stuck at the airport. Image via Facebook page of Raptor. Used with permission

Brazilian extreme death metal band Krisiun was formed in 1990 and is known across the world for their fast musical tempo and violent lyrics. Nervochaos was founded in 1996 and have toured across the world with other heavy metal bands.

Krisiun made a statement about the ordeal on their Facebook page:

We had a very unpleasant experience, where we were victims of a great misunderstanding and experienced more than 10 hours of pure prejudice and misinformation.

As soon as we landed at Hazrat Shahjala International Airport in Dhaka at dawn on the May 9, we were approached by security officers while we searched for our luggage. We had our passports withheld, without any explanation, in an extremely conservative country. The event was canceled and the visas we obtained at the embassy of Bangladesh in Brazil (were) totally disregarded.

Mukit Hasan Khan of the Immigration police told the Daily Prothom Alo that the band members came on a tourist visa and did not have the necessary security clearance from the Home Ministry.

In recent years there have been a number of killings by millitants targeting liberals, atheists, foreigners, gays and religious minorities in Bangladesh. The security forces have intensified their anti-terror drive, especially after the July 2016 Dhaka Cafe attack. The country's security situation has since improved.

Some international news websites reported that the band was detained under a “blasphemy law”, however, Bangladesh does not have such laws.

Local fans of the band were distraught upon hearing about the cancellation.

@Krisiun we are really sorry for the troubles you guys had to go through in Bangladesh. It's very disappointing.

We are really sorry. Been waiting for months to see you guys live. Sorry! :(

The other losers in the fiasco were local bands also scheduled to perform who missed a major opportunity to highlight their talent on the big stage.

The metal scene that has grown up over the last three decades in Bangladesh has faced a number of obstacles linked to the negative attitudes of conservatives towards the genre.

We are hereby to manifest our big appreciation and respect for the Metalheads in Bangladesh, We know it's not their fault the show got cancelled here today. [..]

We came to Bangladesh to make a concert and unfortunately the authorities decided to cancel, it's not the promoter's fault, it's nobody's fault, it's local authorities decision to shut the show down, the Metalheads are great here in Bangladesh the concert was sold out, We deeply thank all you guys here for the enormous support, We will be back one day! Respect, together we are strong, Metal never dies!

The band's Bangladeshi fans published an apologetic video on YouTube showing their disappointment:

Ironically, at round 11:30AM on Tuesday the Home Ministry issued a ‘no objection’ certificate regarding the concert, on the condition that the bands would not perform any music that might offend religious feelings. However, after the long ordeal at the airport, the band members were in no position to continue with the event, which had been cancelled the day before.

In May last year the Swiss folk metal band Eluveitie was also scheduled to perform in Dhaka. The event was also cancelled a few hours before the opening, with authorities citing “security concerns.”

Some metal fans have complained of apparent discrimination towards metal culture by the authorities, as artists from other genres, notably Indian pop stars have been allowed to perform in Bangladesh without problems.

Brazilian metal band comes to Dhaka, show gets cancelled due to ‘security reasons’ and their passport gets seized, and a whole lot of fans get disappointed. No such problems when our neighbours come to entertain us. Double standard much?

The Brazilian band members left for Japan on Wednesday to continue their Asian Tour.