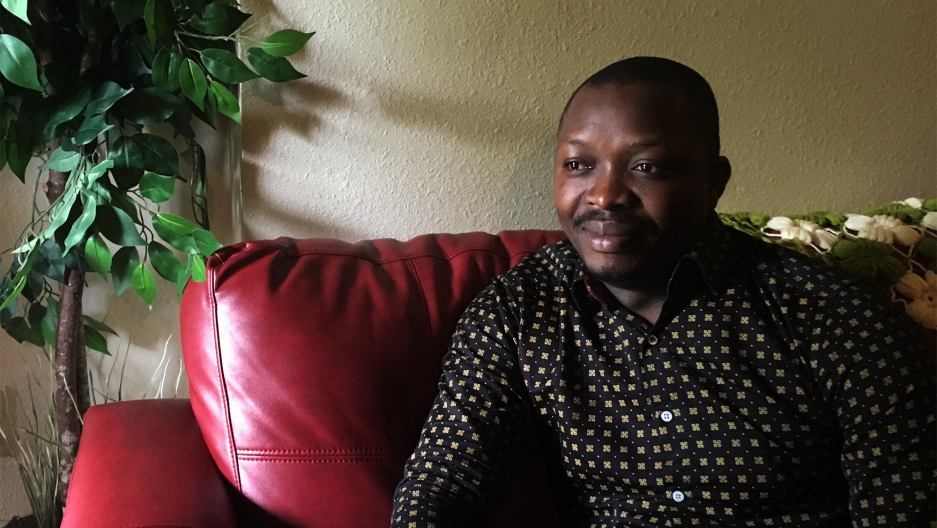 Floribert Mubalama came to the US three years ago, after living for eight years in a refugee camp. He now lives in SeaTac, Washington with his family — and two other refugees he’s taken in. Credit: Isabel Vázquez/NextGenRadio

This story by Isabel Vázquez [1] originally  [2]appeared on PRI.org [3] on May 8, 2017. It is republished here as part of a partnership between PRI and Global Voices.

There’s a letter on Yulina Bilombele’s dining room table that she cannot read.

“Defendant failed to pay the rent and has further failed to vacate and surrender the premises.”

Bilombele is a refugee from the Democratic Republic of Congo. She’s 80 years old. She does not speak English. She is too frail to work and she does not have the money to pay rent.

So, she turns to the man many Congolese refugees in Seattle call: Floribert Mubalama.

Mubalama, 36, has made it his mission to help his fellow Congolese refugees integrate, especially connecting them to basic, affordable housing, which is one of the biggest barriers to starting a new life in the US city of Seattle.

Congolese were the largest group of refugees to arrive to the US last year, according to the State Department data compiled by the Refugee Processing Center [4], about 16,000 in the past fiscal year. The nearly 300 Congolese people who arrived in the Seattle area in the past five years have found themselves dropped in the middle of a regional housing crisis.

Mubalama still keeps the green book he received during his refugee orientation in his living room. He flips to a page that lays out the timeline for resettlement in the US.

“The period expected and according to this book is two to five years,” he reads. That’s ostensibly how long it will take for refugees to integrate fully into their new lives, with stable employment and housing.

But that’s not reality.

Refugees arriving in the US receive funding from resettlement agencies that covers their rent for 90 days. After that, they are left on their own to meet their housing costs, but Mubalama says it’s not enough time for the Congolese refugees in his community to become self-sufficient.

Mubalama came to the US in 2014 after living in a refugee camp in Malawi for eight years. He met his wife there, got married and started his family.

At first, he was placed with his pregnant wife, two children and his brother in a single-bedroom apartment in Tukwila, about 10 miles south of downtown Seattle. With help from a social worker, Mubalama and his wife managed to break their year-long lease and moved to a three-bedroom apartment in nearby SeaTac, where they now live. This process, he says, is not easy for Congolese refugees.

“Landlords are very hesitant to rent to refugees,” Mubalama says. “They don’t know where you are coming from.”

Other challenges like language, lack of credit history and past trauma all make it difficult for refugees to find and maintain stable homes.

So, Mubalama started the Congolese Integration Network, an organization that connects refugees from the Democratic Republic of Congo to resources and people that can help them resettle. It’s an unpaid passion project for him.

“I don’t take it as work,” he says. “It’s paying back. All the time I was living in the refugee camp, I lived out of people’s compassion.”

Just a 10-minute drive from Mubalama’s home is a large apartment complex where many Congolese refugees have found a place to live: the Buena Casa Apartments in Kent.

Mubalama says these apartments have typically been a place that new refugees can afford, a cheaper option than many other Seattle-area apartments. However, on June 1 rent will go up anywhere from $25 to $200 depending on the unit size. It’s an increase that many who are already struggling to make monthly payments will not be able to handle.

Gurmeet Singh is the co-owner of the Buena Casa Apartments. He says raising rent is the only way he can meet higher property tax bills, which increased to $390,000 this year. When he bought the property in 2009, he says his taxes were about $200,000. Rent in the apartment complex will now be $850 for one bedroom and $1,300 for two.

“My parents immigrated to the United States in 1981, so I understand the difficulties they are going through,” Singh says. “If our costs hadn’t increased, we wouldn’t have done this.”

The apartments in Kent are not a unique case.

In the metropolitan area, the cost of rent is rising by 6.7 percent annually, according to a recent Zillow report [5]. In comparison, other regions with fast-rising rents like Los Angeles and Sacramento are seeing increases of at most 4.7 percent annually. Seattle renters will need a larger increase in their income than renters in any other US metropolitan area just to keep up.

For refugees, this poses an added challenge to starting their lives anew — one that the Washington State Department of Social and Health Services will address this month at the King County Refugee Housing Summit [6] on May 24. The Congolese Integration Network is among several refugee organizations that will participate in the discussion. 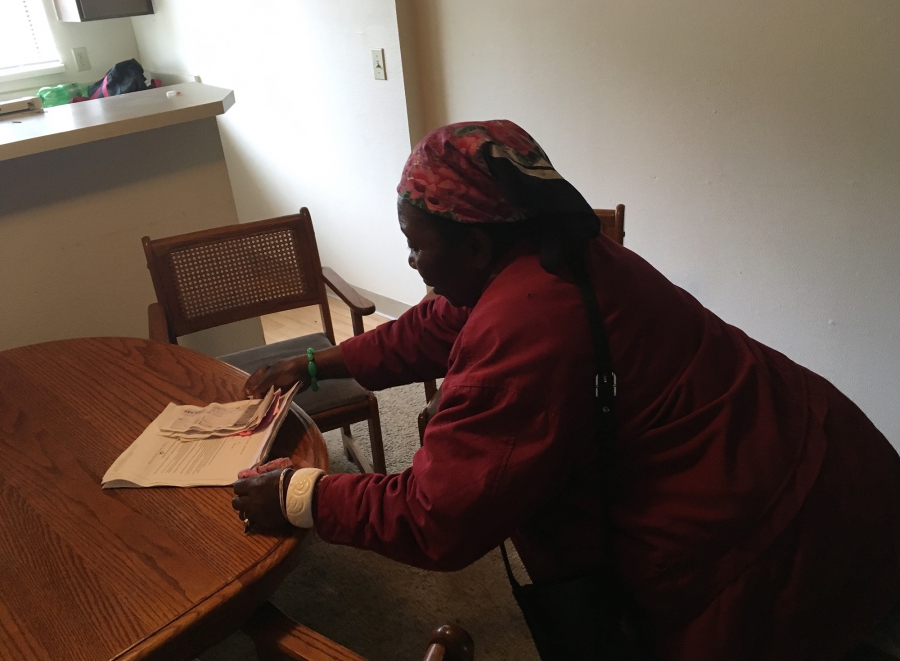 Yulina Bilombele, 80, gathers her eviction notice and rent receipts for Floribert Mubalama to translate because she doesn’t speak English. Both are refugees from the Democratic Republic of Congo living in the Seattle metro area. Credit: Isabel Vázquez/NextGenRadio

Bilombele couldn’t find a stable home when she came to the US two years ago. She stayed with Mubalama for a few days and then found herself in a homeless shelter. Eventually, she moved in with a family at the Buena Casa Apartments, but they left earlier this month. Now alone in the small unit, Bilombele must pay the full rent or face homelessness again.

“My fear is that I don’t have enough strength because of my age,” Mubalama translates for Bilombele. “The money they are asking for, I don’t have have it.”

Mubalama says the struggle to find and maintain basic shelter in the US discourages new refugees who had high hopes for their new life in America.

“When we are resettled, the first thing we expect is a home to stay,” he says. “That is the thing we didn’t get. Our first biggest expectation was not met: it was home.”

This time, there may not be a place for Bilombele at the Mubalama home. The family is already accommodating two other homeless refugees, and does not have space for more.

Isabel Vázquez reported this story while a fellow with NextGenRadio in Seattle. See more reporting from the program [7].