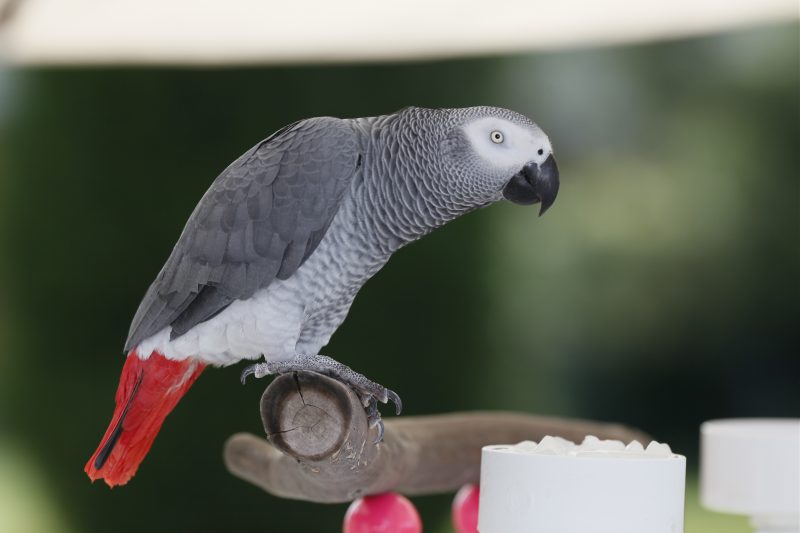 A pet African Grey Parrot on a wooden perch in a garden. Photo by Keith Allison. Creative commons.

A princess’s beloved parrot left its cage and flew to its freedom. The distraught princess’s people scoured the city for the escaped parrot and announced a reward for anyone who found it. No trace of the winged creature emerged.

A fairytale set in the middle ages, or just another day in Tajikistan? The morning the story became known — via shares on social media rather than the town crier — many Tajiks felt as if they had woken up in a foreign country.

I woke up and saw that everyone talks about a parrot. What parrot?

What parrot indeed? Only the gray and red, African-origin (Psittacus erithacus) parrot called Roma that belonged to the daughter of Tajikistan's officially titled Founder of Peace and National Unity, Leader of the Nation, Emomali Rakmon!

Ozoda Rakhmon is not just the Tajik president’s daughter but his chief of staff who is considered one of main political decision-makers in the country. But despite wielding the kind of powers that Ivanka Trump might only dream of, Ozoda's people were apparently unable to hold onto a parrot that wanted out, offering up an interesting metaphor for an authoritarian country dependent on cash transfers from migrants working abroad.

Up to half of working age males in Tajikistan abandon the impoverished country to seek work in Russia and other countries.

The saga of Roma the parrot, which was not reported by any media outlets inside the country, also gave Tajik internet users cause to highlight the growing number of citizens from the country seeking refuge in Europe.

The parrot is already in Europe and asking for refugee status.

Others meanwhile hinted at the repressive measures sometimes taken by the country's government towards the relatives of political refugees:

All relatives of the parrot have been taken hostage.

A rumoured reward of 1,000 Tajik somonis (around $113) for anyone that found the parrot saw further sarcasm:

Maybe it was a talking parrot and knew of many secrets and plans?

Look, friends! A bird is more valuable than a citizen. They are ready to offer a reward for a parrot and mobilize all forces to look for it. But Tajik citizens die inside the country and outside and no one cares.

The only website that reported on the parrot's supposed disappearance in late April was the Prague-based Tajikistan-focussed independent website Akhbor.com that is generally viewed as well-sourced and reliable. Both Akhbor's articles on the matter were later deleted.

Nevertheless, there is rarely smoke without fire, and even if the story of the parrot was in some way fictitious, it seems destined to become legend due to its powerful symbolism.

Alim Sherzamonov, one of the leaders of a non-parliamentary opposition party, the Social Democrats quipped:

The escape of the First Parrot has led me to think that even if a cage is golden, it is still a cage. There are birds, like home birds, that even without a cage are always thankful to their owners until they end up in a pan. And there are birds that prefer freedom over a golden cage, even if it is short-term and bound to lead to their deaths.