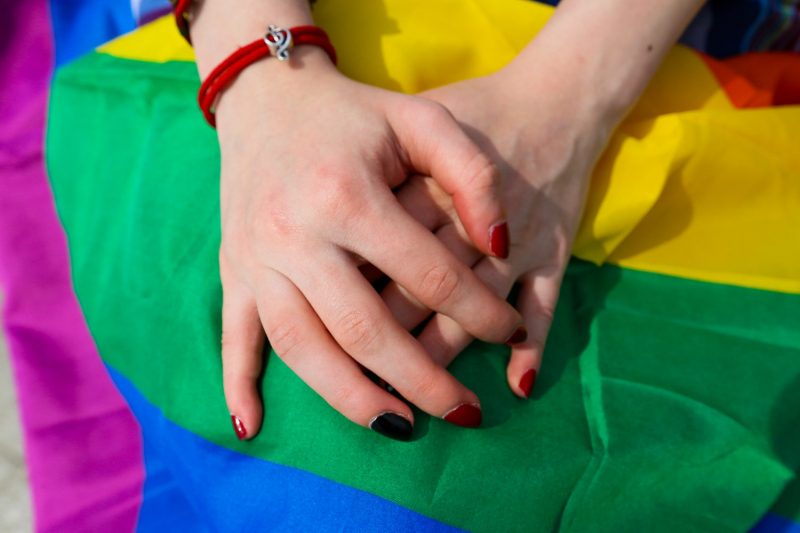 Photo by Aziz Karimov. Used on Open Caucasus Media and republished with permission.

The following is a version of a partner post written by Vahid Ali that first appeared on the website OC Media.

When discussing queer topics, Azerbaijan’s media throws the most basic journalistic ethics completely out of the window. Instead of reporting objectively, the media spreads hate and discrimination, and takes up the role of a bastion for the national government's conservative propaganda.

Homosexuality is still a taboo topic in Azerbaijan, and queer people face discrimination in many aspects of life, and in many different fields, including education, healthcare, employment, housing, and the military and police to name a few.

When queer topics are discussed by media, they inevitably gain more attention from the public. Political actors use this to influence the public, and abuse the mass media, which is trusted by the public despite not being free.

Information warfare is a very real concept for besieged queer people living in the country. Political parties try to spread propaganda and disinformation to manipulate the public into viewing minority elements of society as the enemy.

The media is a key tool for spreading disinformation and propaganda. Whether media outlets are under the control of the government or the opposition, or are independent, in most cases in Azerbaijan they justify discrimination against queer people.

The media shapes the narrative about sexuality, it plays an important role in how society understands and accepts marginalised groups, particularly the queer community.

Samad Ismayilzadeh is the founder and one of the editors of Minority, the first queer magazine in the country. Ismayilzadeh is critical of the media; he believes that they play a huge role in determining public opinion about queer people.

Sometimes journalists forget their power, and mislead people with their unprofessional manners. This can be especially true regarding LGBT issues. When popular news agencies or social media pages share provocative posts about the LGBT community, trying to build the popularity of their portal, most of the time it creates an atmosphere of hate and agony. People start reacting aggressively, bringing some biased thoughts to the table.

When discussing queer issues, Azerbaijan’s media almost always uses homophobic and transphobic language. This includes the headlines they pick and the pictures they present, which have an impact on how readers understand and feel about queer people.

For example, when transgender people are in the news, it is usually related to crimes involving the police.

Priority is given to the perpetrator's testimony in the language of the news when reporting on hate crimes or murders against transgender people.

In most cases, the details of the crime are not covered thoroughly, with coverage instead focusing on discussion of the victim's sexuality or gender identity. The name of the victim on their state ID card prior to gender reassignment is nearly always highlighted.

Hatampasha, who became a woman, was murdered in Baku

Parroting the hate of politicians and officials

The media also blindly spreads hate speech from politicians, ‘psychologists’, members of parliament, and other authority figures, without challenging what they say or offering alternative views. Speeches by state officials are often filled with hate speech, as they containing discriminative, racist, homophobic, or transphobic elements.

Below is an example of how media fashions a deliberately discriminatory narrative:

Gender reassignment, transition from male to female and vise versa, is prohibited by law in Azerbaijan. But, in most cases, private clinics do not pay attention to this law. Despite not being officially allowed, it’s possible to see these so-called “people” who have changed their sex on the social media. It’s interesting, if the law prohibits it, how is Kamil [a male name] becoming Kama [a female name]? The question is about changes of sex. This means that today’s man is tomorrow’s slim-waisted, long-haired women, or today’s elegant woman is tomorrow’s bearded, wide-shouldered man.

Portrayal of the queer people in the media is thus almost exclusively negative, reflecting the intolerance that is present not only in Azerbaijan, but in the Caucasus region as a whole. A more positive portrayal or increased presence of the queer community in the media could serve to increase acceptance and support for the queer community, establish queerness as normal, and provide much needed information on the topic.

According to Ismayilzadeh, there are certain cases where queer people are portrayed in a more normal, even positive light, and are even invited on TV programmes. This depends on their wealth, profession, or even their political views, he explains.

However, more commonly, they face bullying. Ismayilzadeh thinks that queer issues are something people prefer not to even think about. “[People] always see this topic as a problem that should be addressed last, when all other problems have been solved,” he says.

Positive representations of queer people in media can have a huge impact on society, and the media have the opportunity and responsibility to shape culture. Through all media channels and genres, queer people could be portrayed and portray themselves as who they are; in the same way that other people, and other communities have done so over time.

Minority tries to do just that, shining a positive light on queer people. Ismayilzadeh thinks that the media should write stories about queer people, like doctors who save lives or activists who fight for human rights. “There are a lot of great people in the LGBT community that people need to know more about,” he says.

There are a few organisations fighting to protect queer rights and present a different view of queer people in Azerbaijan. But they face many challenges. According to Ismayilzadeh, queer rights groups face difficulties in identifying incidents of hate or discrimination. “There's still big taboo about LGBT, and people prefer to hide incidents from their daily life; that's why defending them becomes harder,” he says.

‘Look, who they hide in the clinic. “Mavi” (a slur for homosexuals) hidden in Semashko [a hosital] or doctors’ “Hide-and-seek” game’.