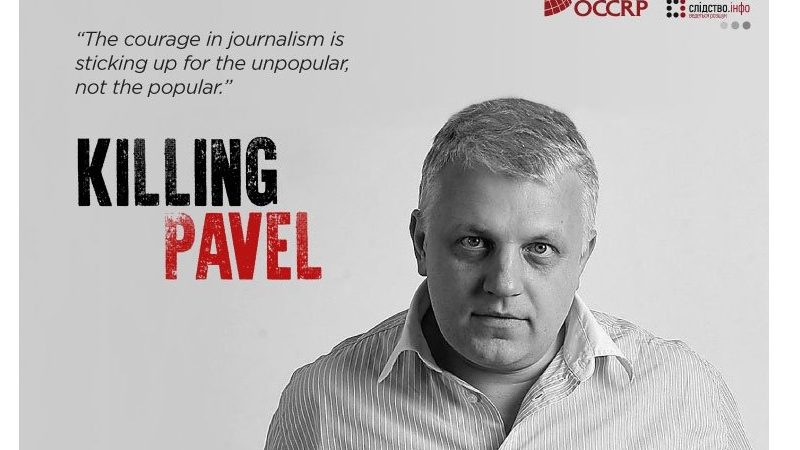 A promotional banner for the documentary film “Killing Pavel” by OCCRP and Slidstvo.info.*

A new documentary film by the Organized Crime and Corruption Reporting Project (OCCRP)* and Slidstvo.info examines the assassination of journalist Pavel Sheremet, who was killed in Kyiv in July 2016.

Ten months after a car bomb claimed Sheremet's life, the official police investigation has made no tangible progress in solving the murder. The report by OCCRP and Slidstvo.info reveals new details about the killing, and questions the quality of the investigation, alleging Secret Service involvement.

The film “Killing Pavel” is available in English, Russian, and Ukrainian. Within three days of being released on YouTube, the three videos together attracted more than 145,000 views, drawing rave reviews from many journalists in the region.

.@OCCRP @HromadskeUA thank you for this film investigating the murder of journalist Pavel #Sheremet #Belarus https://t.co/vJUXV3CZdI

The film also premiered to international coverage, and Ukrainian authorities quickly announced that they will use the report's findings to assist their investigation. The Ukrainian Secret Service, meanwhile, flatly denies any links to the case.

Pavel Sheremet started his career in Belarus, reporting on corruption issues. Under pressure from the Belarusian authorities, he was forced to relocate to Russia in 1997. Fifteen years later, his situation repeated, and he was forced to emigrate again, this time to Ukraine. In Kyiv, he ran a morning radio show and worked for the online newspaper Ukrainskaya Pravda (Ukrainian Truth). He was awarded the Committee to Protect Journalists’ International Press Freedom Award in 1998 and the Organization for Security and Co-operation in Europe's Prize for Journalism and Democracy in 2002.

Online, some Internet users drew parallels to prominent critics of the Kremlin who have faced or succumbed to similar attacks in Russia:

Another killing of #Putin critic in #Ukraine – what about investigation of #Sheremet #Nemtsov murders? @Kasparov63 https://t.co/i0qz5e0JMt

In additional to its information about Sheremet, “Killing Pavel” is also a masterclass in investigative journalism, showing viewers how reporters deal with sources, possible witnesses, data analysis, and intransigent officials.

This 50-minute documentary investigating the assassination of #journalist Pavel #Sheremet is itself a remarkable piece of journalism. https://t.co/NINcYCrEGx

* An earlier version of this story incorrectly attributed the quote in the film's promotional banner to Pavel Sheremet. It was actually said by American journalist Geraldo Rivera.