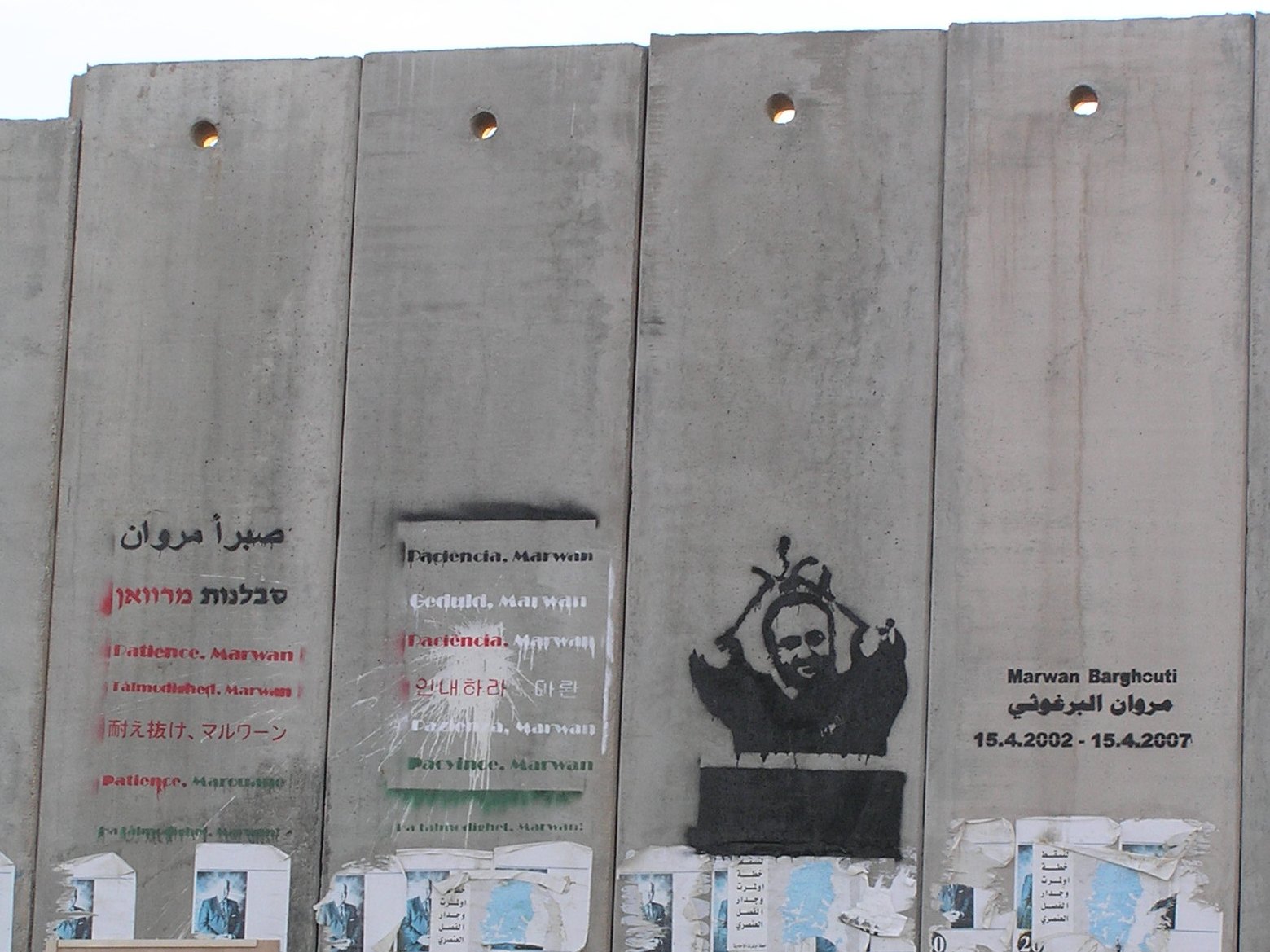 A graffiti in support of political leader Marwan Barghouti on the Palestinian side of the Israeli West Bank barrier wall. Photo by Eman via Wikipedia. Public domain.

Palestinians stormed social media calling for a global boycott of Pizza Hut restaurant after its Israeli branch ran a provocative Facebook ad that mocked Palestinian prisoners who have been on a mass hunger strike in Israeli prisons since 17 April.

Pizza Hut Israel posted on its Facebook page a photo of Palestinian leader Marwan Bargouti, allegedly breaking his hunger strike secretly in his cell. The company photoshopped a pizza box and a pizza slice into the picture, with the cynical comment: “Barghouti, if you are going to break your strike, isn't pizza a better choice?” 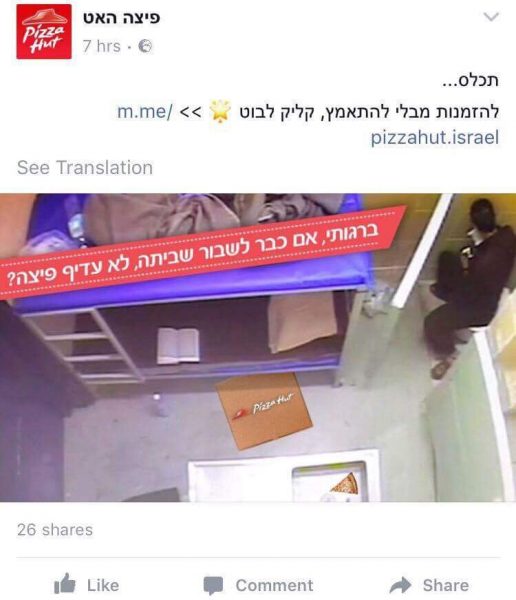 “Barghouti, if you are going to break your strike, isn't pizza a better choice?” Screenshot of Facebook.

More than 1,500 Palestinian prisoners, of the 6,500 in total incarcerated in Israeli jails, are on their 26th day of an open-ended hunger strike to protest against ill-treatment, medical negligence, solitary confinement, administrative detentions and to fight for better conditions.

Angered by the mockery of the struggle of Palestinian political prisoners for their rights in Israeli prisons, Palestinians used the social media hashtags #Boycott_PizzaHut in both Arabic and English to call for a boycott of the global chain.

.@pizzahut, because human dignity is much more precious that your pizza!! #Boycott_PizzaHut #قاطعوا_بيتزا_هت @pizzaHut pic.twitter.com/d7RxAe6Qrg

Mocking & Making ads from a humanitarian cause like the Palestinian Dignity Hunger Strike is disgusting ! Good reason to #boycott_pizzahut pic.twitter.com/KQri2dCub0

Making fun of Palestinian heroes going on a hunger strike in Israeli prisons is such a big shame.@pizzahut #boycott_pizzahut

Yes I support #boycott_pizzahut , you can not make jokes about hunger strike!! It's not funny!!

It was completely inappropriate and does not reflect the values of our brand. The local franchisee in the country removed it immediately and the relationship with the agency that posted it was terminated, and we truly regret any hurt this may have caused.

The offensive ad plays sarcastically on recent footage released by the Israeli prison authorities on 7 May which allegedly shows Marwan Barghouti, an imprisoned leader of Palestinian political faction Fatah who is leading the hunger strike, snacking secretly in the bathroom of his cell.

The Palestinian National Committee for Freedom and the Dignity Strike, a group which endorses the current hunger strike, denounced the allegations and said that the footage dated back to at least 2004. In a statement, the committee added that Israel is “waging a serious war of lies and misleading information to create a state of confusion in the Palestinian public and among hunger striking prisoners.”

Bargouthi's wife, Fadwa, also rejected the allegations in a press conference in Ramallah, stressing that Israel was “resorting to despicable acts” and that “the prisoners are familiar with Israel's lies and games and the video they released signals the beginning of its fall,” and will only make the prisoners more determined.