What the Resistance to Trump Can Learn From Latin America 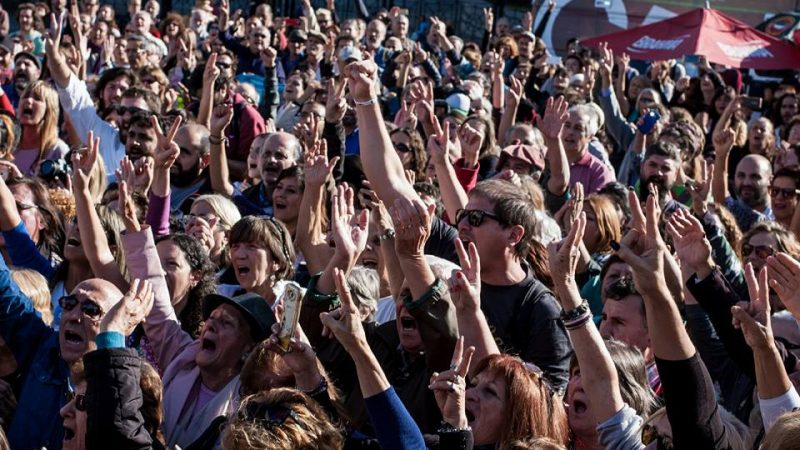 This article was written by written by Jeff Abott originally published on Waging NonViolence under a Creative Commons Attribution 4.0 International License.

It is hard to deny the authoritarian tendencies that Donald Trump has shown in his first 100 days as president of the United States. These tendencies have drawn comparisons to the classic image of a Latin American dictator, and more specifically the caudillo—or strongman leader—by commentators from across Latin America. From his taste in decor and his adversarial relationship with the media, to what critics say is his fundamental assault on human rights, the similarities are hard to contest.

Americans’ neighbors to the south have a long history of resisting authoritarian and fascist regimes, which often were supported by the U.S. government. They were able to survive under difficult situations and, thanks to social movements, move the region in a more progressive direction. After decades of struggle, here are four lessons that movements in Latin America can teach those in the United States organizing against their own authoritarian leader.

Today, as Trump and Education Secretary Betsy DeVos move to dismantle the public education system further and impose a neoliberal model of education, the Chilean mobilization against the U.S.-imposed dictatorship offers a guide for the defense of public services in the United States.

In 1973, the CIA sponsored a coup d’état led by General Augusto Pinochet against the democratically elected president of Chile, Salvador Allende. Following the coup, led by economists who studied under Milton Friedman at the University of Chicago, Pinochet began to implement the first neoliberal economic reforms to the economy, privatizing public institutions like education, healthcare, and pensions.

María Loreto Muñoz Villa was just a year-old baby when Pinochet seized power. By 13, she became the president of her class, and eventually participated in the student movements of the 1990s. Today, she continues to work to challenge neoliberalism in Chile.

“Neoliberalism creates an illusion of well-being that is really not there. In Chile, the debt and the long work hours require that people mobilize,” Muñoz Villa said. However, it's difficult for people to “mobilize because of debt, because if they stopped working, they couldn’t pay their debts. Since 2000, the movement has worked with people to see this as the product of neoliberal politics.”

Pinochet's neoliberal reforms led opponents to organize around certain slogans, such as free education. In 2011, tens of thousands of students took to the streets to demand a free public education. The movement challenged the privatized educational system that was established by the Pinochet dictatorship that denied an affordable quality educational system to the majority of Chileans.

Chile’s student movement has produced concrete changes in Chile’s educational system, as well. In 2013, socialist Michelle Bachelet won the presidential election and delivered free higher education for half of the country’s poorest citizens, funding the program with a 25-percent corporate tax.

Faced with increasing poverty, pensioners and other community activists also began organizing during Bachelet's administration to demand an end to the Pinochet-era privatized pension system, arguing that the current system provides very little to pensioners, while the companies that manage the pensions earn massive profits. Massive protests drew hundreds of thousands of people into the streets, prompting the Bachelet administration to announce recently that it will begin overhauling the pension system.

These campaigns and movements all arose from a shared understanding that neoliberalism is at the root of social inequalities in Chile. According to Muñoz Villa, the rise of Trump means that movements must organize against both his more overt repressive policies and the social impacts of neoliberalism.

Efforts to defend public services like education are already well established in the United States. Teachers of the Chicago Teachers Union have led the charge to protect the public education system, and their movement has grown stronger thanks to connections with teachers in Mexico and South America. These relationships need to be stronger still, and they need to spread more across the U.S., as the struggle to defend public services heats up in the coming months.

The historic dispossession of indigenous lands and territory in the United States has continued into the 21st century. In just the first few weeks of his administration, Trump systematically dismantled legislation to protect the environment from extractive industries. He has also repeatedly expressed his interest in expanding mining activities, pipelines, and hydro energy, which will continue to threaten indigenous land. These assaults on indigenous territory in the U.S. reflect similar trends in Latin America, where indigenous communities have spent the past 30 years building movements across the hemisphere to defend their lands from the expansion of mega-projects.

The defense of territory has also generated new means of communal power and fueled major social changes. Groups in South America, such as the Landless Workers Movement in Brazil, have worked to create autonomous, horizontal forms of education within their communities’ classrooms. Other movements, such as the Zapatistas in Mexico, have utilized their territorial autonomy to construct an autonomous educational system, as well as healthcare systems that incorporate ancestral medicinal practices with modern medicine.

The movement at Standing Rock began to build bridges to many of these communities. At the height of the encampment, indigenous leaders from countries like Guatemala and Mexico traveled to South Dakota to share their experiences and lessons from their movements. Indigenous leaders stressed that communities in the U.S. and throughout Latin America share the same struggles and enemies. Despite the camp’s destruction in February, the foundation for sustained resistance to protect indigenous lands is now in place.

Politics as usual has failed most rank-and-file workers in the United States. Despite the support that Trump received from the working class, his election means disaster for workers and organized labor. Trump’s war on unions has included nominating an outspokenly anti-union lawyer to the National Labor Relations Board, and putting forward a number of anti-union candidates for Labor Secretary. As neoliberalism continues its assault on workers, the lessons from South America can also provide organizers with another means of how to organize in the workplace at times of crisis.

The 2001 economic crisis in Argentina that forced millions out of work and led to the collapse of financial services triggered the piquetero, or picketer, movement. This mobilization brought together vast numbers of impoverished unemployed workers to demand and obtain a sustainable livelihood. They were forced to construct alternatives to the neoliberal capitalist system.

Protesters adopted the slogan “Que se vayan todos,” or “They all must go,” and sought to replace the corrupt political system that led to the 2001 crisis. In the course of two weeks, four presidents were forced to resign due to the popular protests. Furthermore, the movement contributed to the emergence of direct democracy on street corners, where neighbors would come out and work together to resolve problems within their neighborhoods.

“The piquetero movement did not only resist neoliberal politics, it created productive ventures,” said Raul Zibechi, a Uruguayan journalist, author, and social-movement analyst. “They ended their dependence on the state, and began working on autonomy — not an ideological autonomy, but a practical autonomy.”

Employees recuperated their workspaces when they returned to work and found locked doors and shuttered businesses. Following the crisis, workers formed more than 180 cooperatives. By 2014, this number reached 311 businesses employing 13,462 workers.

The rise of this movement eventually helped Néstor Carlos Kirchner win a narrow presidential victory in May 2003. His administration’s first steps were to renegotiate the country’s debt, and to break ties with the International Monetary Fund and the World Bank.

Argentina's history also serves as a warning to Americans fixated solely on winning electoral battles, without also building alternative forms of power beyond the state. Zibechi argues that the rise of Kirchner led to the decline of the piquetero movement and is an example of how a movement can be co-opted by politicians seeking power above all else.

Kirchner spoke out against popular protests, stating that the piqueteros should use more traditional democratic means, such as voting, rather than blocking roads and picketing. Furthermore, many middle-class voters, who made up many of the neighborhood associations, were taken in by the Kirchner campaign, believing that it was an anti-neoliberal administration. But his administration never led to a move towards a social and economic alternative.

The failure of the subsequent administration of Cristina Fernández de Kirchner to transform the political situation led to the eventual return of the neoliberal influence in Argentina, and the election of right-wing politician Mauricio Macri in 2015.

A key lesson from the piquetero movement in Argentina and the movements against neoliberalism in Chile is that finding a means of constructing new forms of social relations outside the neoliberal and traditional political structure is a necessity for those organizing against Trump. These local solutions can provide communities with the means to build sustainable movements to resist the draconian policies of any government.