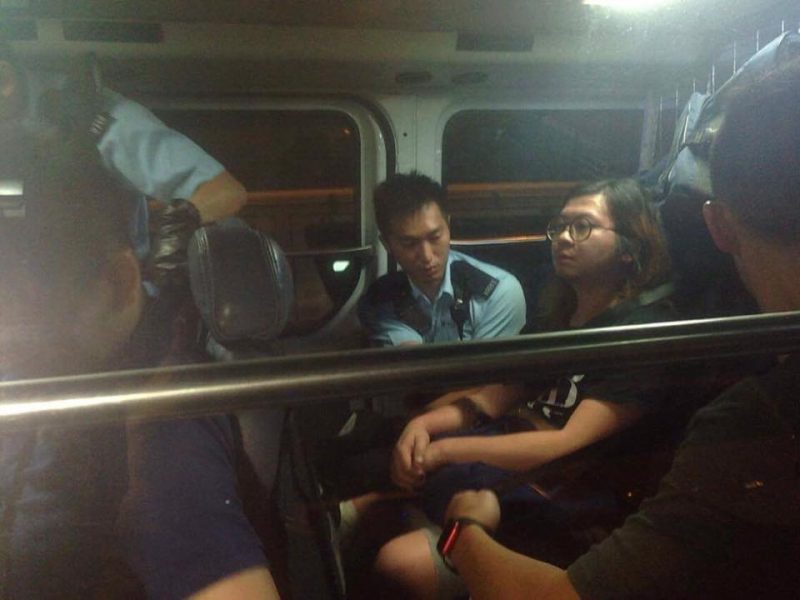 An underground indie music house called Hidden Agenda was raided by undercover immigration officers and police in Hong Kong on May 7. Seven people were arrested during the crackdown in the factory building, which is located in the Kwuntong district, including Hidden Agenda's founder Hui Chung-woo and members of British band This Town Needs Gun and US rock band Mylets over alleged visa offences.

While Hong Kong gives visa-free entry to citizens of the majority of countries in the world, the city's law does require visitors who come to participate in conferences, seminars, exhibitions or performances to apply for a work visa. However, as an international city which encourages business travelers to participate in conferences and exhibitions, the law has seldom been applied to prosecute those who come on a short business trip without a work visa.

In that context, many Hong Kongers viewed the crackdown against Hidden Agenda as selective. Below is video showing the police raid on May 7:

The three overseas performers have been released on bail and have to report back to Hong Kong police in one month. Four locals have been charged with obstructing law enforcement, and Hui Chung-woo, Hidden Agenda's founder, has been charged with four other counts related to hiring overseas workers without a work permit.

The bands This Town Needs Gun and Mylets responded on Facebook to their arrest:

After last night’s event, we have learnt that it is extremely difficult for musicians to thrive in Hong Kong. It requires an incredible amount of strength and passion to persevere. Hong Kong as we know as an international city with freedom and diversity, should give greater room for creative works and performance to flourish.

That said, we shall not be discouraged, instead we will continue to travel and share our music with the world. We sincerely hope that we will be welcomed by more fans and music lovers rather than law enforcers at our possible future performances in Hong Kong.

Hidden Agenda has been a target of police harassment for many years because of Hong Kong's contradictory policies regarding the restoration of industrial buildings. Since 2010, the government has started encouraging the “revitalization” of these spaces, but it has not amended the law to allow cultural activities in them. Therefore, many cultural groups are conducting workshops, exhibitions and performances in legally grey areas.

In a statement, Hidden Agenda (HA) explained how local laws have eliminated its survival space:

HA is located in a factory building unit and according to the rental contract [of industrial buildings] enacted in 1967 and 1973 “factory building units cannot be used for purposes other than industry and warehouse”. If we continue to stay in industrial buildings, we are illegal and all work visa applications related to HA would most likely be rejected by the immigration.

Hidden Agenda is not the only cultural groups making use of industrial spaces, so the implication of the crackdown are worrying, musician Simone Fassan argued on Facebook:

I think it would be misleading to see the latest Hidden Agenda raid as an isolated episode. You could easily believe the HA guys are wrong, for not providing the bands with the required visa for performing.

In reality, if you are familiar with the situation in Hong Kong, the latest raid seems more like part of a well planned campaign aimed at crashing every business that does not belong to the big business.

This is normally done through insanely expensive rents and sudden rent increases, that often become unaffordable for the average shop/bar/club owner that does not belong to the usual big corporations. […]

Hidden Agenda seemed to be a case on its own, a venue in an industrial building that still attracts many followers. A fairly successful model of alternative business.

It’s right to expect people to follow the laws, but if it’s true what the lawyer declared, that the government would not issue working visa for artists if the venue is in an industrial building, what other choices would HA have? Only the one of stop organising any concert.

Imagine if every single participant of Hong Kong business fairs would be required to own a working visa. Would Wan Chai convention centre be raided with anti riot squads and dogs, and the businessmen that do not own a working visa brought to jail?

As the crackdown involves the arrest of UK and US performers, the international indie music sector has also voiced their support for Hidden Agenda. Oliver, a Taiwanese music festival curator, pointed out:

Losing HA is not just losing one live music house, it affects the ecology of indie music. Not just the local, but indie bands from China, Taiwan, Japan, Korea, Europe and the US will hesitate to perform in Hong Kong without HA. I can't imagine what Hong Kong will be like. Many say that Hong Kong will be turned into an ordinary mainland Chinese city — I think it will be worse than other cities in mainland China. Look at the first-tier cities in China, there are still many live music houses in Beijing, Shanghai, Guangzhou and Shenzhen. They have normal channels to process work visas and can hold public performances. Hong Kong has what? Hung Hom Stadium? Wanchai exhibition center? Kowloon exhibition center? That's so great, what an international metropolis!

It’s a DIY venue inside of a large industrial complex, unmarked (speakeasy style), and requiring you to take an industrial elevator to get there. And once there, you’re in this incredible room that feels exactly what you would imagine underground live music and culture should feel like. The staff are friendly and funny, the show goers love and fully support independent music, and you walk out of there feeling incredible about what this whole thing we do is about. Hidden Agenda is 100% DIY, independent, underground spirit.

And of course, because of that spirit, they’ve had constant issues with authorities and law enforcement in Hong Kong.[…] this is a shame and another blow to underground art and culture. I can only hope that Hidden Agenda comes back strong because it is one of the best places I’ve ever performed in as an independent musician. In the end, art will prevail because it always has. Stay strong Hidden Agenda and HK music scene.