Chronicles of a Concerned Venezuelan: The Scars of History 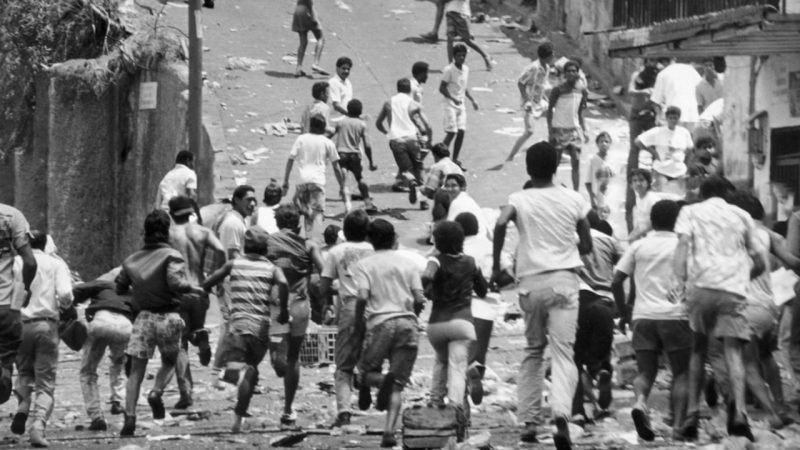 “For my friend and many others like him, Venezuela is nothing but a clear example of the breakdown of a country’s essence, of that coexistence of difference that could sustain a society and perhaps even a cultural approach. What is Venezuela right now? Who are we, the Venezuelans who have survived this historic defeat?” Screenshot of the documentary “Caracazo en Venezuela” available on Vimeo.

This post is the first of a series originally published by the author on Medium. Read the second installment here.

A few days ago, one of my lifelong friends told me that after emigrating, he discovered that he hated being Venezuelan. That was the exact phrase he used. I didn’t know what to say, looking at his face on the Skype screen with a vague feeling of concern and bitterness.

“It’s true. You just have to leave the country to understand how miserable we are.”

I blinked, with a knot of fear and fury in my throat. My friend seemed to notice my discomfort and shook his head in sympathy.

“I know you don’t understand.”

“What I don’t understand is that notion of a country of disaster and chaos that involves your nationality, your history, who you are. It’s not that I deny what’s going on here, I never do. But what you tell me is something else.”

“Are you more nationalistic than you thought?”

The question both infuriates and discourages me. A rare mixture of feelings that relates directly to how I still understand the country and, above all, the way I live it. I feel a sense of sheer anguish at the thought that Venezuela, the country where I was born and raised, has become a kind of symbol for the pain, frustration and disappointment that afflict most Venezuelans. As if our nationality—that confusing personal abstraction that defines us as part of a broader idea of the place we consider ours—were also broken and lost, like so many other things that could define us. Maybe it was true, I think nervously. Perhaps being Venezuelan is no longer about who we are, but something more like a fear, a reflection of all the small misfortunes we bear.

“It’s not about nationalism,” I say, “but about the fact that the combination of the crisis we are experiencing and the way we perceive ourselves seems to me unfair. An extreme that makes us despise everything that Venezuela can be, beyond this crisis. That’s what I mean.”

“We are this crisis,” my friend says, almost with resignation. “Don’t you see? It is not only about a political system that turned out to be a historical scam, but also about a general resignation, an acceptance of the situation that has a direct relationship to what Venezuela is and has become in the last years. Don’t tell me that the Venezuelans bear no responsibility in this crisis. That it’s not their apathy, irresponsibility, indifference, that has brought the country to this abyss. You can’t be that innocent!”

I’m not. But you perceive things in a different way when the crisis is part of your daily life. Whether it’s the fear you carry everywhere, the persistent sense of frustration and helplessness, it is not easy to understand the scope of the overall situation in the country while you’re in the midst of it. However, the idea of being responsible for what we experience merely because we don’t know how to face it seems scandalous. Yes, I admit that perhaps I do not have a concrete or elaborate vision of the political and economic monster we face. I think there is a sometimes escapist, even simplistic, perspective of the increasingly complex situation we face. But there is a difference between our perception of what we’re experiencing—and how it affects us—and the fact that that this perception of what we suffer destroys everything else. It even robs us of historical memory.

“Venezuela was an ideal breeding ground for a guy like Chavez to do exactly what he did,” my friend insists. “Don’t you see? Chavez turned Venezuelan social resentment, envy and apathy into a political weapon. This made it okay to hate, to single out and stigmatize the other. Chavismo made hatred profitable.”

My friend emigrated from the country ten years ago, fleeing from the mere possibility of what Chavismo could do. At that time, the country still maintained a certain normalcy, a deceptive appearance of perfectible democracy. But it was already quite clear that the decisions of a charismatic and irresponsible leader were leading to the devastating crisis that, ten years later, would affect everything. I remember the last conversation we had before he left the country, how I feared the mere idea of what a failed system based on control could do. And, even more worrying, what the fact that the majority of the population repeatedly and sincerely voted for a political leadership obsessed with building a political system on the ashes of the country could mean.

“Communism does not forgive anyone,” he had told me, “much less Venezuela. The Venezuelan is digging his own grave, his own interpretation of a statist socialism. And he is doing this because of his way of understanding the country as a project.”

It would take me a decade to understand that phrase. And to deal with its magnitude and suffer the direct consequences of a political project whose main objective is the State’s control of every part of the citizen’s life. An autocracy based on hatred, exclusion and the punishment of difference. Even so, I can’t admit that the country—as an entity and vision of the future—is the “culprit” in an intolerable situation. That the historic disappointment of Chavismo is an indictment on what Venezuela was and is, and, above all, what can be.

“You don’t believe it because for you the Venezuelan’s “creole” excitability, the dependence on the state, the vulgarity and the tackiness are normal. You consider it inevitable for the country to be part of that old tradition of understanding power as subservience. A ‘slave’s soul’, some analysts call this. Even I ended up believing it. This is an interpretation of the country that is based on entrapment, conflict and hatred. It is inevitable and it gets worse and more worrisome. What do you think Chavismo is but a reflection of the worst of what we are?”

My friend’s reasoning would be considered insulting and arrogant were it not for his tone of sincere concern. And perhaps the dilemma is not solely based on an idea of the country as a project involving many, but on that failed attempt to accept what Venezuela can be based on who we are. For my friend and many others like him, Venezuela is nothing but a clear example of the breakdown of a country’s essence, of that coexistence of difference that could sustain a society and perhaps even a cultural approach. What is Venezuela right now? Who are we, the Venezuelans who have survived this historic defeat? I don’t know, I say, trying to contain my tears, and maybe that uncertainty is the most painful aspect of a situation that gets worse every day, and that becomes unbearable on a more radical level.

“Venezuelans created Chavismo in their image and likeness, not the other way around, as people usually believe” my friend concludes, in a low, regretful voice. “What is, in fact, Chavismo? It is each of the defects and pains of being Venezuelan translated as politics. It is rentierism brought to a new and dangerous political dimension. It is that climate of latent hatred that Venezuelans always considered a stigma. If Chavismo continues like this, it is because many Venezuelans are incapable of fighting against their own hardships. Because Chavismo embodies the monster inside the monster. A very complex idea about how we understand each other and the country. Venezuela was a Chavist country even before Chávez existed.”

I keep thinking about his words for hours; surely I will for weeks. With a mixture of pain and fear that’s difficult to explain. How do you perceive and understand your historical responsibility when the worst things about your native country are part of the perception of power?