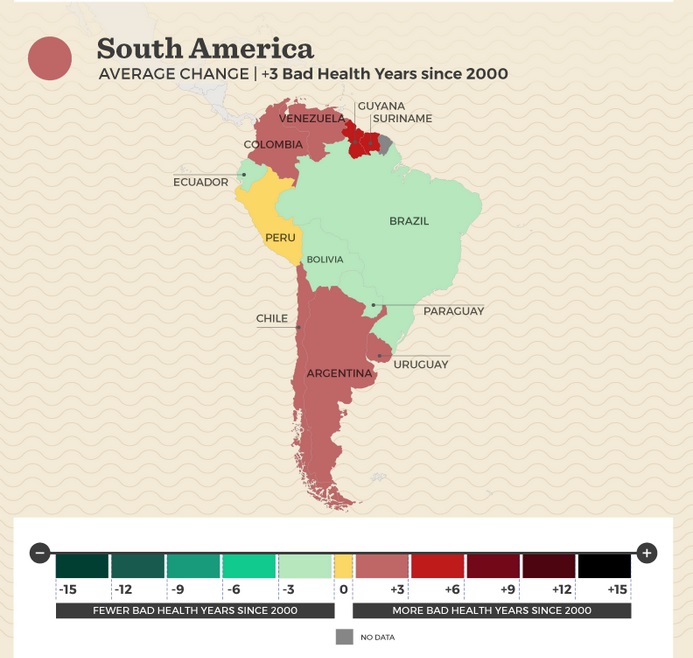 Infographic about changes in bad health that mya be expected in South America, used with permission [1].

Medigo, a health-specialized platform that connects patients and physicians all over the world, has completed a comparative global study [1] on life expectancy.

On average, human beings live longer today than ever before. Nearly every country on the planet has seen an increase in life expectancy since the beginning of the 21st century, with the global average [2] reaching 71.4 years in 2015. But there are huge variations in life expectancy between and within [3] nations, as well. In Europe and North America, the average is 73 years, in Oceania it is 71, in Latin America is 70 years, in Asia is 61 years, and in Africa it is just 55 years.

Medigo, however, decided to take its analysis a step further and ask the question [4]:

The World Health Organization confirms that we are living longer, but are we living healthier?

Healthy Life Expectancy, or HALE, is what the World Health Organization uses to measure how many years an individual can expect to live while maintaining a healthy lifestyle. Influenced by factors like quality of healthcare, hygiene, wars, and more, HALE still fails to take into account violent deaths. This rating has registered improvements [5] in recent years [6].

Life expectancy increased by five years between 2000 and 2015, the fastest increase since the 1960s. Those gains reverse declines during the 1990s, when life expectancy fell in Africa because of the AIDS epidemic and in Eastern Europe following the collapse of the Soviet Union. 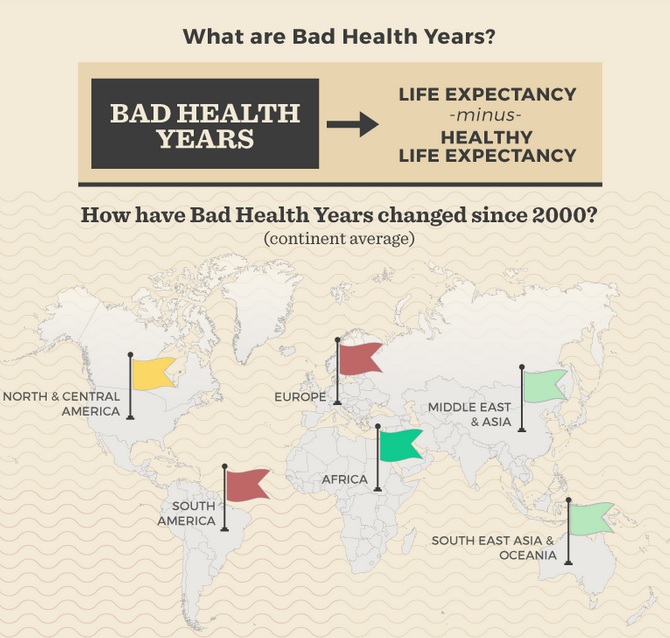 Infographics about changes during bad health years to be expected in the world, used with permission.

In a brief conversation with Global Voices, Giulia Gutterer, online marketing manager at Medigo [8], explained the difference between the traditional measurement by WHO and the “Bad Health” measurement they propose:

Basically we take the total life expectancy, which is just how much we are expected to live and is determined at birth, and we deducted the healthy-life-expectancy years from the actual life expectancy. After doing this, we see the average amount of years someone can expect to live in bad health: “Bad Health Years.” Bad Health Years are the years you live with diseases and disabilities.

You can find all Medigo's infographics on its website [9].