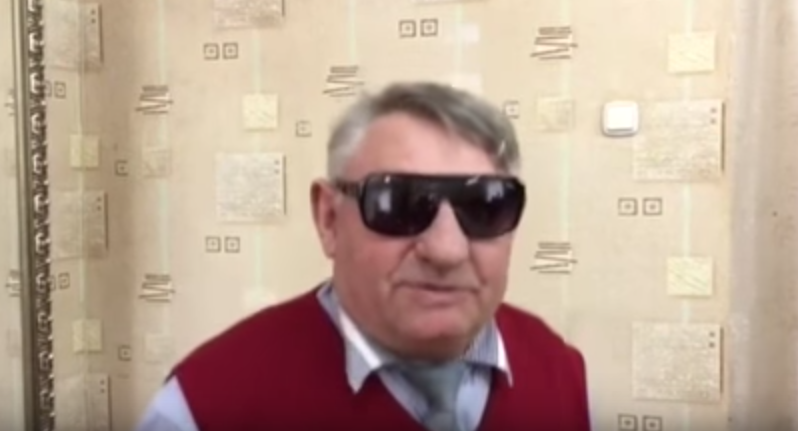 A fringe activist group has taken on Russian opposition leader Alexei Navalny in a video featuring pensioners spitting rhymes and busting sick—or at least feeble—moves in the latest parody of the Ukrainian band Griby’s hit “Tayet Lyod” (The Ice Is Melting).

It’s been a rough couple of weeks for Navalny. On April 27, assailants again doused him with a corrosive antiseptic, this time causing serious damage to his right eye and forcing him to seek treatment in Barcelona. And then came this video, which might leave viewers tempted to reach for an antiseptic to cleanse their own eyes.

The lyrics are as follows:

Navalny and his gang are walking down Tverskaya
There’s hope in his empty head:
How to take Russia for himself
But Lyokha doesn’t get it
That Russia won’t bend to your will
The specials services keep an eye on them and will knock him over the head

The original song by Griby is one of the biggest hits in Russia this year and has spawned numerous parodies. This latest parody showed up on YouTube at the end of March and went viral after Navalny himself reposted it on Twitter.

That’s it. I’m done with politics. I’ve been hit with the most terrible possible blow: “United Russia” in Krasnodar did a cover of “Tayat Lyod” about me.]

Though Navalny attributed the video to United Russia, it was in fact produced by a fringe activist organization in Krasnodar called “Social Justice.”

Social Justice is ostensibly dedicated to distributing aid to impoverished families but has become better known on the Russian Internet for its ham-fisted Navalny trolling. Its YouTube channel contains a trove of bizarre videos that frequently feature an off-camera voice posing leading questions to elderly activists who respond with tirades filled with anti-opposition falsehoods and conspiracy theories. As an article published on the website Medialeaks points out, at least one of the women in the dance video figured prominently in a recent raid on Navalny’s office in Krasnodar.

This isn't the first time one of Social Justice's videos has been mocked into going viral. In 2013, they had another dubious hit entitled—seemingly without irony—“An Analyst’s Opinion About Navalny.” It features an elderly woman ranting about outlandish and patently false accusations, such as her baseless claim that Navalny put his wife away in a mental institution and then “cavorted with prostitutes.” In another video from 2013, the same woman blames Navalny for the protests in Ukraine that led to the EuroMaidan Revolution, claiming that “Navalny only needs money, money, money, he doesn’t need anything else. Foo on him!”

The videos tend to be somewhat stilted and artificial in tone, leading some to speculate about possible elder abuse, but it must be admitted that the seniors in the videos are nothing if not passionate in their opinions and delivery.