Iraq's Parliament Is ‘Convinced’ There's No Corruption Under Health Minister Hamoud. But Are Iraqis? 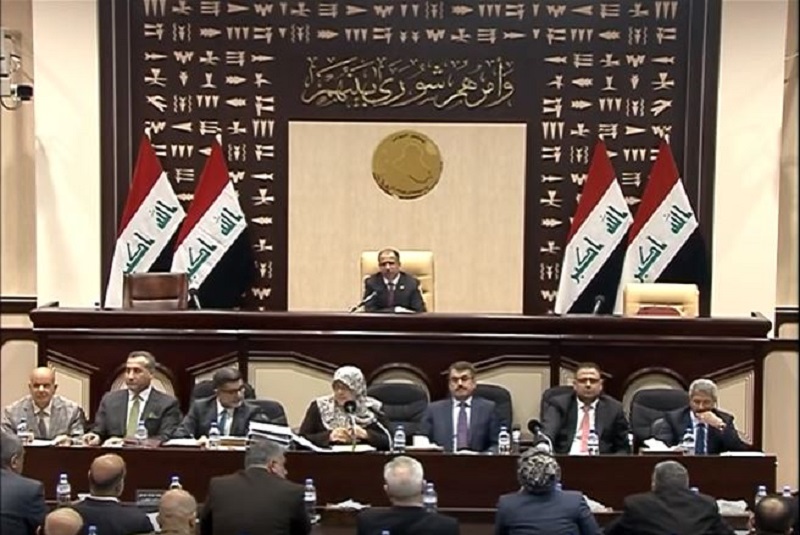 Screenshot of Adilah Hamoud addressing allegations regarding corruption within the Ministry of Health. Source: Youtube

A video recording has been making the rounds on Iraqi social media of a lively celebration welcoming health minister Adilah Hamoud, member of the State of Law Coalition and current ruling Iraqi National Alliance, back to work after she was questioned by legislators over corruption concerns.

The video begins with a man slaughtering a sheep in front of the minister's car, which is traditionally done in times of celebration. Later on, others can be seen dancing and congratulating Hamoud.

Not everyone was happy with her return or her performance, however.

Hamoud, nicknamed the minister of death by her critics for her perceived indifference towards Iraqi's health and well-being, had been subject to days of questioning in parliament concerning corruption within the Ministry of Health.

Some of the questions revolved around a number of wasteful government contracts. Member of Parliament Awad al-Awadi, of al-Ahrar party (also part of the Iraqi National Alliance), revealed millions were spent on beds, bedside tables, and disposable medical safety boxes despite shortages of essential drugs.

Awadi also exposed a puzzling agreement with a Portuguese company to purchase 26,140 medical shoes at 27 US dollars a pair. He claimed the exact same shoes are sold in Iraq for little more than 2 dollars a pair.

A health crisis amid accusations of corruption and mismanagement

This is not the first time Hamoud has come under fire for suspicions of corruption within the health ministry.

Last year, Iraqis cried out against the corruption and mismanagement that led to a hospital fire and the death of 13 prematurely born babies in Baghdad. Hamoud fired the hospital director to appease the public and offered to resign if an investigation found the cause of the fire was due to negligence. The health ministry initially claimed the fire was caused by an electrical issue; however, they later concluded that the fire was set deliberately. An investigative committee alleged to have found gasoline used to start the fire at the site of the incident.

Despite the investigations’ findings, the lack of adequate health services in the country is undeniable. In a 2009 article, reporter Corinne Reilly described the most pressing issues facing the healthcare system:

Health ministry workers routinely siphon drugs from hospital orders to make extra cash on the black market. Millions of dollars meant for clinics and equipment have gone missing. Millions more have been wasted on government contracts to buy expired medicines.

The healthcare system continues to suffer from these issues, and the humanitarian crisis precipitated by the ongoing war with militant group ISIS has put additional pressure on an already broken system. Dr. Margaret Chan, director-general of the World Health Organization, described the health crisis in Iraq as horrific. According to Chan, the country's public health, water, and sanitation systems are collapsing and preventable diseases like measles and cholera are on the rise.

Healthcare has become so inadequate that Iraqis have turned to medical tourism in neighboring countries, including Jordan, Iran and Turkey but even as far as India, and in some cases the government will pay for treatment abroad, as Adnan Abu Zeed reported in 2015 for news site Al-Monitor.

‘The government believes that poor healthcare is what the people deserve’

For many Iraqis, Parliament's decision to overlook the problems within the health ministry is yet another example of the tolerance that exists in the country for government corruption.

Iraq's political power-sharing system, or “Muhasasa”, imposed after the 2003 US occupation can, in part, explain why corruption is met with shrugs instead of action. The system is supposed to prevent conflict by guaranteeing each of the major ethnic and religious groups in Iraq a part in the political system.

But while decades of sanctions and war have taken their toll on Iraq's healthcare system, ongoing corruption stifles any improvement. Indeed, as Nussaibah Younis, a fellow with the American think tank Atlantic Council's Rafik Hariri Center for the Middle East, explained:

The trouble is that it also prevents the government from being able to function effectively. Each political group treats the ministries that it is awarded as its private fiefdom, using it to skim money and to award ministerial positions to party loyalists and important constituents. This has created a government that has been wholly incapable of delivering the basic services demanded by the Iraqi population.

Iraqis turned to social media to express their frustration with parliament's decision.

The parliament does not represent the people's struggle because it always supports those working against the people.

Parliament’s satisfaction with Adilah Hamoud’s answers means the government believes that poor healthcare is what the people deserve from the corrupt minister.

Some were quick to point out that a pair of the medical shoes mentioned above costs more than a barrel of oil.

A barrel of oil costs $25 and you bought medical shoes for $27, you must have a shoe for a brain.

The “Iraq First” Twitter account shared a cartoon that takes a stab at the health ministry's misplaced priorities. A pair of medical shoes are connected to the patient's IV with the caption: “Nothing is more important than your health.”