Young Slovaks Seem to Have Higher Work Standards Than Previous Generations. Is That Good or Bad? 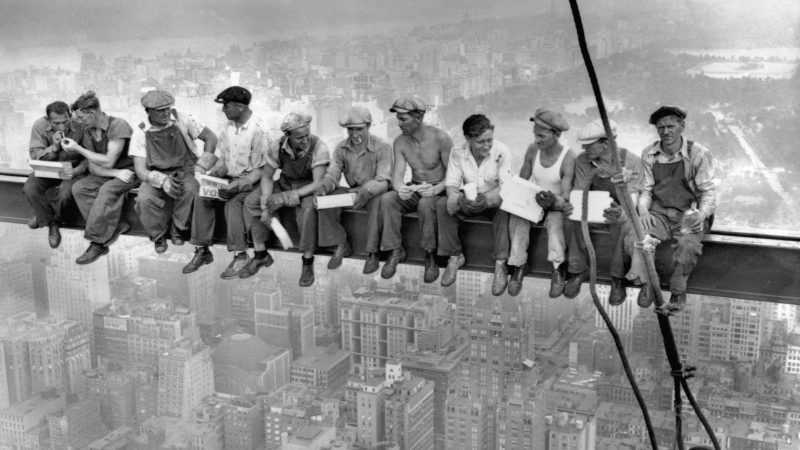 One of the workers in the iconic 1932 photograph “Lunch atop a Skyscraper” by Charles C. Ebbets is a Slovak named Gustáv (Gusti) Popovič – the first from the right, with the bottle. Source: Wikipedia.

In the past, Slovaks had a popular reputation as people willing to work hard (and then party hard). These days, however, there's an ongoing discussion in Slovakia that is questioning this perception and accusing young people of being unwilling to work, following a recent news report on the subject.

The Slovak economy has been doing rather well in recent years. Unemployment is decreasing — in December 2016 it was at 8.8% — and now falls just between the averages for the European Union as a whole and the Eurozone, i.e. the EU countries that had adopted the common currency. The latest Eurostat figures from May 2 show further decrease of general unemployment to 8.4%. As in other EU countries, the youth unemployment is much higher, at 18.8%.

Factors that have contributed to a lower number of unemployed include a change to how they are counted in the first place, which deducted about 0.8%, and the fact that more Slovaks are choosing to work abroad. Currently, about 300,000 people or about 12% of the Slovak workforce does not work within their country of origin.

The “missing” labor is just partly replenished by the estimated 30,000 foreign workers in the country. Companies in Slovakia have started to feel the lack of people, and in response wages are slowly growing to try to attract workers.

So when news site Aktuality recently published a report alleging that with today's conditions young people exhibit a poor work ethic, it created much turmoil on the Slovak internet, receiving over 600 comments. The story quoted a chief executive describing what frequently happens in one car company:

The younger generation today does not value work very much. Regularly it happens that after the break two or three people are suddenly missing at the line. They simply go away. They do not say anything to anybody. At the gatehouse they leave work gear and access card.

This new phenomenon is not related only to the automotive industry or the more prosperous region of Western Slovakia, according to Aktuality, but seems to be a nationwide trend even in the areas with higher unemployment to the East.

One of the factors could be related to bureaucracy. The state employment agency forces those who are registered as unemployed to accept positions that might not suit them, under threat of losing social and health benefits.

“After they accept jobs they do not want to endure a long time, they violate work rules and want their employer to fire them,” explained Jana Mesárová from the employment agency Wincott People in the article.

An estimated 20 percent of people will leave these jobs within three months, which the Ministry of Labor views as an abuse of the social system. Therefore, officials have promised that they will introduce an amendment to the law to “fix” the problem.

KotrasE: They rebelled against low salaries and let themselves be fed by parents who earn even less and in more difficult conditions. Simply said, it's irresponsibility, no respect for parents, and laziness.

On the other hand, some defended young people, believing that the days of endless working like their parents and grandparents did should be over:

cippi: But it's not just about low wages. People born later are the so-called Generation Y which is completely different to the previous one. They want to work less and have more free time …

Many saw the issue as a result of the difficult working conditions, especially in manufacturing:

Local employers made the point of aligning wage expectations with experience and qualifications:

Vidicon: It's like they write in the article. I can't find electricians. And at our place they are often earning over 1,000 [euros] net, and some a lot more. But young people who finish secondary school have nothing to offer, no practice and ask for a starting salary of 1,300 gross. …

Some commenters argued that a boycott would not help:

Hetfield_18: You can scold as much as you want, nothing will help you. … If you do not like how much you earn than do something about that, find another job, travel abroad, learn new things, ,,,

Many pointed to the gap between living costs and wages:

DustToDust: …it's not about laziness, but about human dignity if wages for work do not cover the basic costs of the workforce

While others noted the differences in expectations between older generations and younger:

janokosice5: I get that replacement for a pensioner will be an increasing problem because the pensioner works for 400 € net and young people want 1,000€ or more

Perhaps the higher standards of the younger generations will change conditions, some thought:

milan5321: Finally, a generation that will not tolerate [employers] thumbing their noses at them. Bread-providers must change not only the amount of salaries, but also their attitude toward workers. …

And others wondered if the younger generation was moving away from manual work:

lipovec121: … They all want to work with computers in the office, but physical work is not good for then. For that we hire Serbs, Romanians, Bulgarians, Ukrainians. …