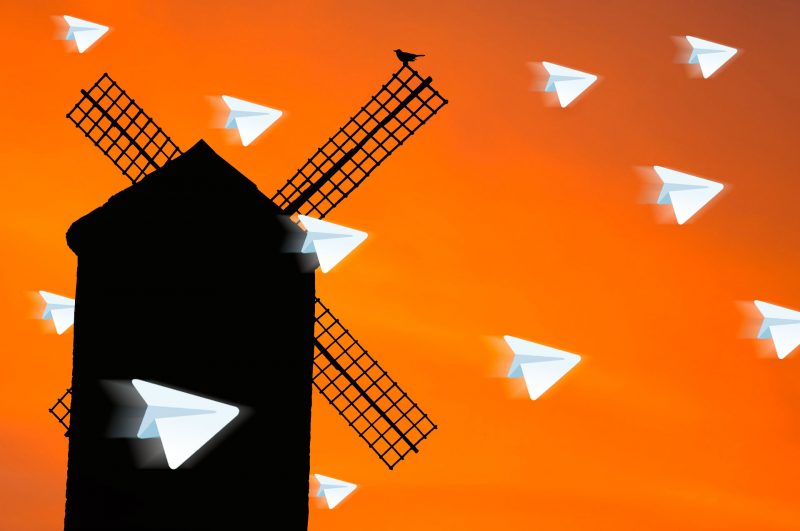 From time to time, RuNet Echo translates into English particularly insightful comments that appear in the Russian media. Last Friday, the website Znak.com published an article by columnist Oleg Kashin about the messaging app Telegram, focusing on the rise of “channels” dedicated specifically to spreading anonymous political rumors. Kashin argues that the Russian authorities’ fear of scrutiny has helped boost the legitimacy of news content that used to be relegated to conspiracy websites, as traditional journalists and pundits lose the public’s interest.

The emergence of Telegram channels last year transformed what was a popular messenger into a social network, and aside from the question we always ask about new social networks these days (will it or won’t it take off?), there’s another basic riddle: who will be the main user base, and who will become its stars?

You can never be sure: a network dreamed up for geeks might end up a haven for happy little school kids, or the other way around. The first Telegram channels belonged to people already established on other social networks. They brought over the same names, the same discussions, and a familiar language. Back then, in their first few months, Telegram channels were a social network without a face — not until “Nezygar” appeared.

This happened not long after the release of Mikhail Zygar’s book, “All the Kremlin's Men.” The chief editor of the independent TV station Dozhd (who left his job shortly after the success of his book, of course giving rise to rumors that he was dismissed because he offended the people mentioned in his book) wrote a fascinating nonfiction account of Vladimir Putin’s first 15 years in power. Zygar’s detached tone, his insider’s certainty (the author sounds like he was hiding in the reeds when Putin and Medvedev went on that fishing trip and agreed to swap places), and his excellent delivery made the book a real political event in Russia in 2015.

But an anonymous, still unmasked Telegram channel calling itself Nezygar found an even better delivery: “The real Zygar tells you his version of the Kremlin intrigues, I’ll tell you mine, and if you liked reading the real Zygar, you’re going to like me even better.” And it worked. Someone even more self-assured than the real thing, spreading insider gossip about how the “Feoktistov clan is really weakening,” instantly became a superstar on Telegram and probably the social-network-messenger’s first original format that wasn’t already successful on Facebook or Instagram.

To this day, the search for the person who runs this channel is still a popular diversion for many Telegram users, but there’s no reason to think this mystery would be more interesting once it’s revealed. Over so much time, a well-known person probably would have given himself away by now, and if nobody so far has managed to match this famous anonymous figure to some political analyst, state official, or journalist, then we’re likely talking about someone unknown. And that’s just fine.

Why “by definition”? Because any non-anonymous author instantly falls alongside hundreds of other writers: from [professor and columnist] Ekaterina Shulman and [columnist and radio show host] Yulia Latynina to myself and [columnist] Yekaterina Vinokurova. There are lots of people now writing about politics in Russia, and none of these political authors can claim that their readers trust them entirely.

There’s a firm consensus in our society today about bias in the media. Part of that consensus is justified, and part of it isn’t. There’s also a crisis of confidence in the media (here you can blame a lot, from the crooked journalism of the 1990s and the oligarchic media of the 2000s to our modern-day propaganda), and it’s compounded by how absolutely closed off the authorities are from society. It’s gotten to the point that any “informed source” seems untrustworthy, simply because journalists have no means to verify or refute anything they say. And the default distrust that follows any political text paradoxically becomes an interrogation of its dodgy sources.

When you know in advance what to expect from a familiar author, you’re instinctively drawn to the author you don’t know. 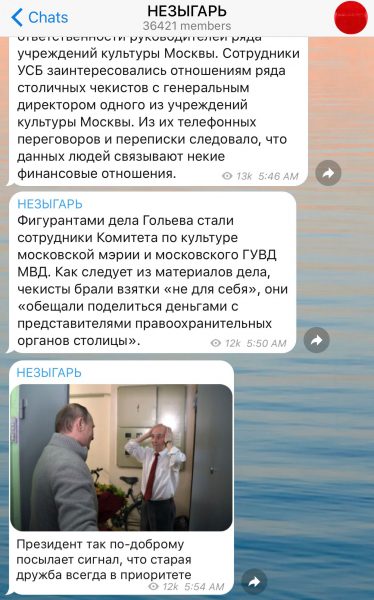 The Nezygar channel on Telegram.

In the past, a political text of unknown provenance written with that “insider tone” was the stuff of websites that published smear attacks. It was part of a notorious information cesspool. Now everything has flipped, and anonymous posts look considerably more respectable than non-anonymous texts.

This formula can probably help explain the success enjoyed by the recently unmasked and dismantled “Anonymous International,” the success of Mikhail Zygar (before the release of his book, he spent several years at Dozhd, steering clear of on-the-ground reporting), and the success of Nezygar. None of these sources offers the ultimate truth on anything, but at least they differ from the usual political analysts and columnists, whom everyone knows not to believe.

But Nezygar’s success isn’t just the size of his audience or the number of times he’s quoted; it’s also the format he invented, which dozens of other channels (often just as anonymous) now reproduce today. Metodichka, Karaulny, Politota, Politburo 2.0, Mysh v Ovoshchnom, Chto-to Znayu, ATS-1, Akitilop — you won’t make it halfway through this list, and if you subscribe to them all in one go, you’re in for a single, continuous blend of “Kremlin insider” insights, updated every minute.

But how the quality of these “insider” insights varies, when compared to Nezygar! Instead of classic speculation about “different clans weakening,” we now seem to be reading stories by the same “informed source” we already know from the political desks of loyalist newspapers. This source tells us that the 2018 presidential election will be a referendum on trust in Putin, that the Kremlin is unhappy with the activists spraying antiseptic at oppositionists, that Moscow is going to go after them, and that Putin won’t sign the law on demolitions in Moscow, if the law violates civil rights.

It turns out that you can also frame propaganda as a secret leak, delivered straight to your smartphone, mixed in with instant messages from your friends.

Secretive but ultimately endearing, Nezygar cut out a cozy little path for insiders that dozens of imitators have since trampled, like elephants through a garden. It’s obvious that half the Nezygar clones are professional projects, and their authors are only on Telegram to collect a paycheck. Some copycats pretend that they’re here to reveal something, but really they’re just listening to others, and at the end of the work day they fire off a memo to their supervisors that summarizes the day’s Telegram content.

It would be a stupid, senile act to complain that Telegram already isn’t what it used to be, but it really isn’t the same, in the sense that we’re no longer alone.

In the life of every new social network, there’s a happy period when the network hasn’t yet become an integral part of the media landscape — when you and your friends are there, but the spammers, the trolls, the paid phonies, the drones writing their memos, and the other bums haven’t yet arrived. It’s just a brief period, but it’s what allows you to fall in love with every new social network. It’s these moments that fuel migrations from LiveJournal to Twitter, from Twitter to Facebook, from Facebook to Vkontakte, back to Facebook, and then to Telegram.

Political channels on Telegram will probably be around for a long time still, but the thin, imperceptible line that separates what’s in and what’s out makes it hard to know for sure.

This article, written by Oleg Kashin, was originally published on Znak.com. To read the Russian text, click here.