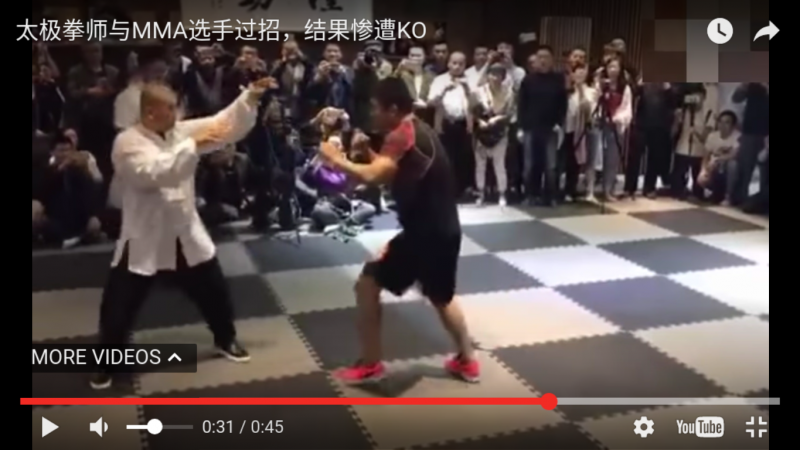 In about ten seconds, a Chinese Mixed Martial Arts (MMA) fighter, Xu Xiaodong, defeated Tai Chi Master Wei Lei in a fight in Chengdu on April 27, 2017. The fight came about after a few months of online quarrel between the two over the development of Chinese Kung Fu — Xu criticized traditional Chinese martial arts for being too performative, losing its practical combat skill thanks to the bureaucrats who run martial arts organizations like corporations.

His accusations about “fake combat competitions”, along with his open challenge to the representatives of traditional martial arts, created an online uproar that went on for more than a week.

The fight between Xu and Wei was streamed via social media and soon went viral online. Below is a copy from YouTube:

After the fight, the Tai Chi circle attempted to rescue its reputation by suggesting that Wei Lei is not a genuine master, while others pointed out that the combat competition rules are unfair towards traditional Chinese martial arts.

Xu responded via WeChat that he would continue challenging major representatives of Chinese martial arts, in order to expose the “fake Kung Fu” phenomenon in the sector:

I, Xu Xiaodong, want to expose the fake Chinese martial arts and the big tigers. I am now 39 years old. I will fight the young representatives and old representatives. I can have two or three rounds of battles in one night. Please don't avoid the fight; as representatives of major Kung Fu style, dare not you join the fight?

On May 7, both Xu's Weibo and WeChat accounts were suspended.

The problem of “fake Kung Fu” performance has caught public outrage in the past few years. The most well known example has been Tai Chi master Yan Fang’s public performance of “Chi” in September 2012. The fake performance of pushing down four big guys with Chi was exposed by one reporter on spot, and the video went viral. Yan was the fifth vice-chair of the Hebei Martial Arts Association.

Hence, many Chinese netizens supported Xu and were thrilled to see more public fights. But Tai Chi grandmaster Chen Zhenglei urged his students not to react to Xu’s challenge.

Below is Chen’s letter, which was circulated via various Chinese social media:

Happy festival [May 1, Labour Day] dear students! Your master mother and I have returned from our European tour last night and read the viral news about Xu Xiaodong's fight with [the] Kung Fu master! What I see is that there are people with ill intention picking fights with the Chinese martial arts sector. It will destroy the solidarity within the martial arts sector. I suggest that the International Federation of Martial Arts and the Chinese Martial Arts Association should stop this. If Xu has the ability, let him join the international competitions and fight for the country's glory. This is my suggestion for the leaders of the Martial Arts Association. They have given their response and will look into the issue tomorrow. They also urged students of Chen's Tai Chi not to react to the challenge or we will fall into his trap. If the crazy guy keeps smearing others, we can take legal action. Hear, I bid you to be prudent in your action. I also urge you to keep up your practice so that we can fight for the gory of Chen's Tai Chi, and for the country when we face challenges in the future.

As anticipated, on May 3, the Chinese Martial Arts Association issued a statement accusing Xu of “fight picking”, and alleging that his behavior is illegal and against Kung Fu virtue.

The Chinese Martial Arts Association's statement has successfully saved the faces of key representatives of major martial arts streams by forbidding its members to respond to the challenge.

However, those outside the Chinese martial arts institution are eager to fight Xu using their own rules. For example, Hu Qiong, a Shaolin Chi master, dared Xu Xiaodong to take up a drilling machine challenge: 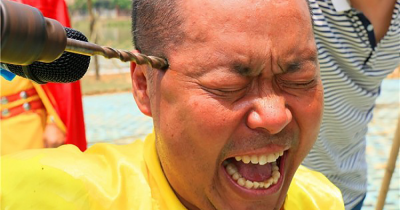 If Xu Xiaodong is such a good fighter, let me hold the drilling machine to drill his temple, throat and etc. If he did not get hurt, I would recognize his Kung Fu and his talk about the fake Chinese martial arts phenomena.