US Law Students, Driven by Their Own Family Stories, Are Helping Asylum-Seekers 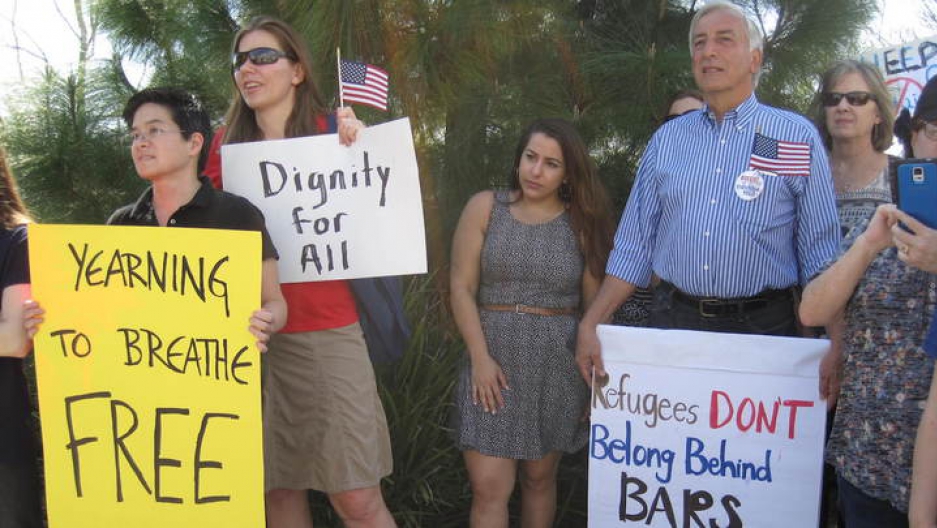 This story by Zaidee Stavely originally appeared on PRI.org on April 20, 2017. It is republished here as part of a partnership between PRI and Global Voices.

A colorful mural on the wall at the University of California, Davis’ immigration law clinic shows letters from immigrants behind bars and chains turning into quetzal birds: a metaphor for the students’ work.

Chicano studies students painted the mural and “chose the quetzal over the dove because it represents freedom,” explains the clinic's co-director, Holly Cooper. “In the Mayan mythology it’s believed that if a quetzal is brought into a cage, it will die.”

Only 15 minutes away from the university is a juvenile detention facility that contracts with the Office of Refugee Resettlement to hold minors who crossed the US border alone.

“It’s sickening and disturbing to even drive to this detention facility, because two doors down is a brand new high school, that my clients should be attending,” says law student Sara Ehsani-Nia. “Instead they’re behind bars in a detention facility after having committed no crimes. It’s illustrative of our really broken system.”

Ehsani-Nia has represented five clients this year, through the immigration law clinic, which lets students take on cases, with guidance. And more clinics like this one — focusing on immigrants and asylum-seekers — are being created. Many of the students at the UC Davis clinic are from immigrant families themselves.

“I was born in Los Angeles, and my parents are refugees from Iran,” says Ehsani-Nia. “The foundation’s the same: You’re coming to this country with virtually nothing, and knowing virtually no one.”

But Ehsani-Nia knows her family’s story is also fundamentally different from that of many of her clients, three of whom have been unaccompanied minors from Central America.

The last client Ehsani-Nia had was G.E., a 14-year-old boy from Honduras. Ehsani-Nia asked that we only use the boy’s initials since he is a minor in foster care. G.E. says he fled severe abuse in his home in Honduras. He also left alone, crossed the Texas border, and turned himself into authorities. He has no family in the US. He won asylum in January, but remained in detention. That’s where Ehsani-Nia met him.

“Every time we visited him we would bring a deck of cards with us and play cards or dominoes,” Ehsani-Nia says. “We felt that would loosen him up, and make it slightly easier to ask difficult questions that we needed answers to in order to complete our habeas.”

Eventually, the boy was released into foster care. Ehsani-Nia joined a rally outside the detention center to protest against it holding dozens of unaccompanied child migrants inside, and to celebrate G.E.’s release. Ehsani-Nia saw him right after he was freed.

“It was really remarkable,” she says. “He was wearing the clothes he wore when he was brought into detention a year ago. And as you can imagine, a 14-year-old boy in his growing stage looks a little bit different. But that was literally the only thing he owned: that T-shirt, those shorts, and those sandals.”

At the rally, an immigrant rights advocate reads a letter that G.E. wrote to supporters, who lobbied for his release and donated a duffel bag full of clothes for him. “Me gustó la gorra de los Red Sox. I really liked the Red Sox hat,” he reads, to laughter. “I hope to meet you some day. Con mucho cariño, G.E. With lots of love, G.E.”

After the rally, Ehsani-Nia takes a few minutes in her car to call her mom. She greets her mom in Farsi, then switches to English.

“Do you remember my 14-year-old client that was in immigration jail? We got him out yesterday!” she announces.

Ehsani-Nia says she feels drawn to give back as an immigration lawyer, in part because of her parents’ story.

“A lot of what you see with all the students, there’s almost like an invisible thread of your past pulling you to do certain areas of work, whether you sort of realize it or not,” Cooper says.

She explains how her own family history drew her to this work. Her grandfather fled Russia as a child and was later abandoned when his mother could not take care of him anymore. She says students’ stories make them strong advocates.

“Students can also be cultural navigators, and say, ‘Holly, don’t do that,’ or ‘You may want to try this,’” Cooper says.

After President Donald Trump’s inauguration, the clinic has received more calls from students and community members wanting to help. Clients, too, are on high alert. One client calls or emails almost every day, worried about being detained or deported, Cooper says.

For Ehsani-Nia and many of her fellow law students, Trump’s executive orders on immigration feel personal. “It’s scary to feel attacked in this way,” Ehsani-Nia says. “It’s very insulting, and professionally it’s scary to see our clients going through so much distress.”

When Trump’s executive order tried blocking people from certain countries from entering the US, Ehsani-Nia drove to San Francisco, and helped an elderly Iranian couple detained at the airport. For the first time, she spoke Farsi for her legal work. It felt good, she says, and reminded her of something her parents taught her: to value her citizenship by voting, raising her voice, and standing up for the rights of others.