There Is a Wall Along the Mexico-U.S.A. Border and I Want To Show What It Really Looks Like 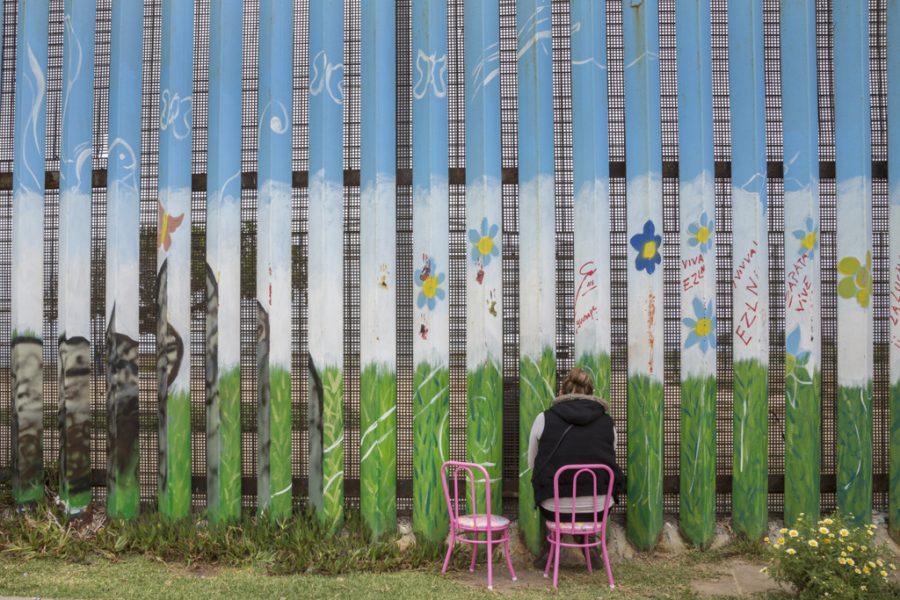 Alejandra Vallejo visits her husband Daniel Armendariz at the border wall at Friendship Park in Tijuana, Mexico on May 15, 2016. The couple has been meeting at the border every Saturday and Sunday for the previous 2 months. Armendariz cannot leave the United States because he is on probation and Vallejo does not have the documents to legally cross the border into the United States. Photo by Griselda San Martin. Used with permission.

This story by Rodrigo Borges Delfim originally appeared on MigraMundo on January 31, 2017. It is republished here as part of a partnership between MigraMundo and Global Voices.

Contrary to what Donald Trump says, there is already a Mexico-U.S. wall. It covers about 1,000 km of the 3,200 km border between the two countries and its construction began during Bill Clinton’s administration (1993-2000).

There is an area along this border that is covered by a binational park — Friendship Park (or Parque de la Amistad, in Spanish) — where people from both sides can interact with each other, despite severe restrictions by the Border Patrol.

Showing the existence of this physical barrier — but also a psychological and social one — and raising awareness of its effects is the goal of a project called “The Wall”, developed by Spanish photojournalist Griselda San Martín between 2015 and 2016 in the Friendship Park area.

In an exclusive interview for MigraMundo, Griselda talks about the development of the project and shows that Trump, in fact, has already managed to build a kind of wall that divides U.S. society. 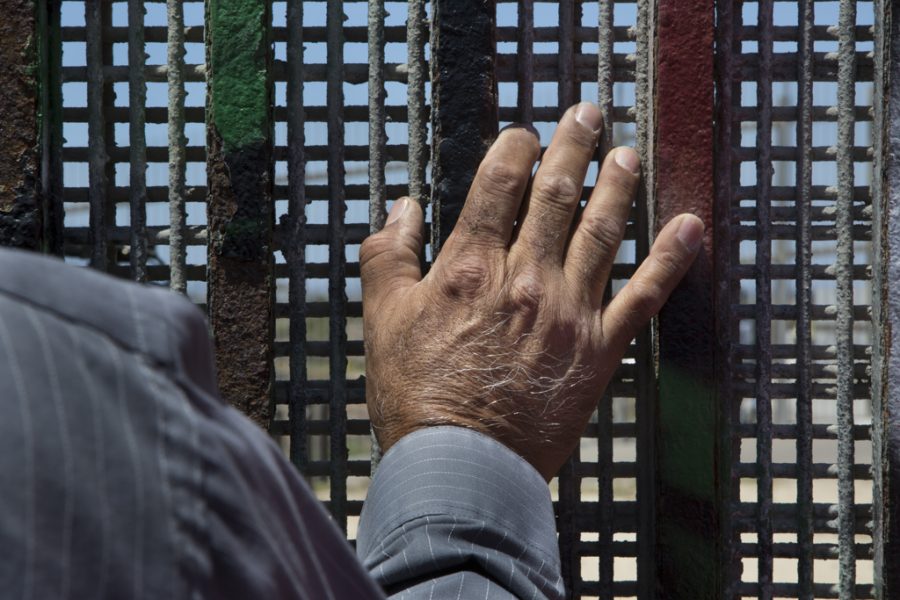 Pastor Guillermo Navarrete of the Methodist Church of Mexico stands at the border fence at Friendship Park during the weekly meeting of the Border Church in Tijuana, Mexico, on May 22, 2016. The binational service is conducted simultaneously on both sides of the border fence in English and Spanish. Photo by Griselda San Martin. Used with permission.

MigraMundo (MM): How did you start working with migration issues?

Griselda San Martin (GSM): It was at the School of Journalism (2011-2013) that I started to approach the subjects that would awaken my interest in immigration issues. Focusing on the issues of cultural identities and ethnic minorities, I became familiar with the human consequences of immigration policies during a first research trip to the border region of Tijuana-San Diego in 2013.

MM: How much time have you spent developing “The Wall”?

GSM: After graduating from the International Center of Photography in New York in 2015, I went back to the border and spent a year working on social documentary, finding stories of deportation, separation, displacement, and human rights violations. ‘The Wall’ was one of the long-term projects that I developed from September 2015 until August 2016.

MM: Did you have some kind of sponsor to create the project?

MM: What is your opinion about the new president of the U.S.A., Donald Trump?

GSM: The new political climate in the United States is worrisome.

President Donald J. Trump is showing clear signs that he plans to do what he promised during his campaign. During his first week as president, he has signed several executive orders that might greatly affect several minority groups. In terms of immigration issues, he wants to deport millions of undocumented immigrants, renegotiate the NAFTA [North American Free Trade Agreement], ban refugees from specific countries, and make a wall along the southern border and make Mexico pay for it. Some of these things are not new. Obama deported 2.5 million immigrants and there already is a wall along one-third of the border between the U.S. and Mexico.

He might or might not construct or extend that wall, but he has already built a wall that has divided American people. And he only seems to care about the ones who voted for him. Somehow it is evident that immigration has been wrongly blamed for the economic troubles of this country. Some minorities will feel the consequences of this perception.

MM: What kind of difficulties have you found during the project?

GSM: Friendship Park, which is the section of the border wall that I have been photographing (where the families meet), is only open on Saturday and Sunday for a few hours. That means it’s only a few hours a week that I was able to work on this project and I had to go back many many times.

Sometimes the weather conditions were not favorable. Sometimes people did not want to be photographed, but I have to say that most of the time they were okay with it.

On the Mexican side of the wall, the park is open. But on the U.S. side, there is a second fence and the area is controlled by the Border Patrol. I was not allowed to use microphones on the U.S. side and the time allowed to photograph and film was very limited. I had to ask for permission in advance.

GSM: My goal is to show the human consequences of immigration policies. The separation of families. There are people in this country who ignore that there already is a wall. I want to show them what the wall looks like, and what it means for the individuals affected by it.

MM: Do you have plans for another project related to migration?

GSM: Yes. I am already working on a project on Hispanic immigrants who live in the United States and how their lives are now, and how they will be affected by the new government.

MM: Talking about migration, what does migration mean for you?

GSM: Migration, to me, is sacrifice. People who leave everything behind in search of a better future for themselves and their children. 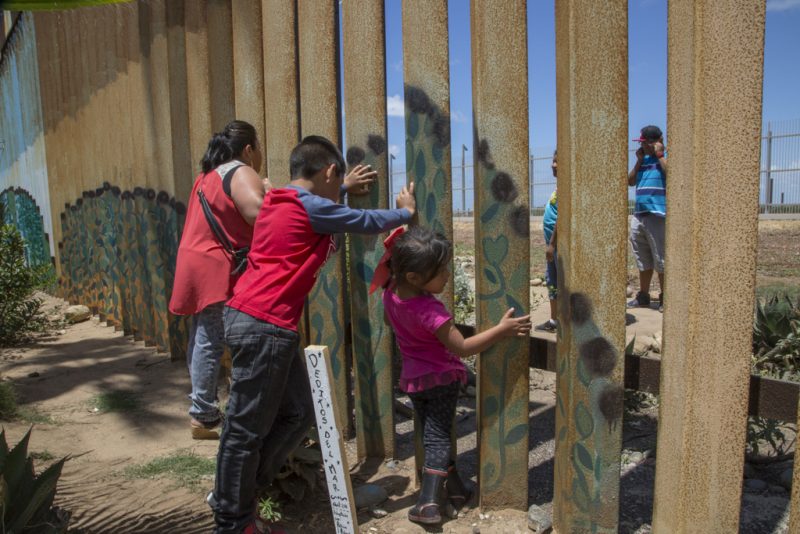 Carmen Morales, with two of her grandchildren, Christian (8) and Sofia (4), meet, for the first time, Morales’ daughter-in-law and grandchildren — Jessi (15) and Crystal (11), who came to visit from San Bernardino, California. In this area, the iron bars are separated enough that families would be able to easily hug, but it is strictly prohibited to approach from the U.S. side. Photo by Griselda San Martin. Used with permission.

“The Wall” documents families who meet on both sides of the Tijuana-San Diego border fence at Friendship Park, at a time of rising xenophobic political tensions. The park is the only binational meeting place along the 2,000-mile border dividing the United States and Mexico.

When the park was founded in 1971, the fence was just a strand of barbed wire. Today, a massive metal wall, which has been reinforced multiple times, separates the two nations. It extends down to the beach, stretching out 300 feet into the Pacific Ocean. Access to physically touch the wall on the U.S. side is limited to a small area, and families lean against the fence trying to catch a glimpse of their loved ones through the steel mesh, which is so tightly woven they can barely touch fingertips. In a small area of the park, the space between the metal bars would allow for families to hug, but the Border Patrol on the U.S. side is always vigilant and visitors must stand a few feet away from the fence, as any kind of physical contact is strictly prohibited.

Besides serving as a meeting place for families, and because of the historical meaning and strategical location of the park, social events (such as weddings, sweet sixteens, and binational gatherings) are held periodically, and activists gather to demonstrate and raise awareness for social causes.

“The Wall” examines these border interactions against the backdrop of a xenophobic political climate, where border enforcement practices have reshaped public spaces through detention and containment. The big and “beautiful” wall that some politicians have promised to build already exists. But despite the massive metal fences and militarized checkpoints, love has no borders. 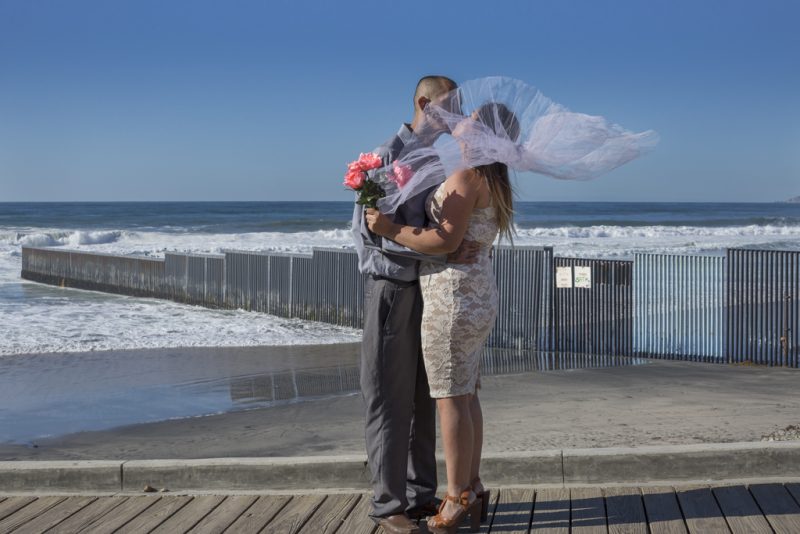 Pastor Jonathan Ibarra and wife Gladys Lopez at their wedding photoshoot in front of the the U.S.-Mexico border fence in Playas de Tijuana, Mexico, on December 12, 2015. The border is a symbolic place for Ibarra and Lopez, who both grew up in California but now live in Tijuana, separated from their whole family. Ibarra was deported and Lopez doesn’t have papers to legally reside in the United States. She tried to cross over three times, but was caught by the Border Patrol and returned to Mexico. Photo by Griselda San Martin. Used with permission.