Jordan's Magic Sorcerers Continue to Be Sought After 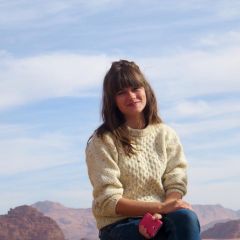 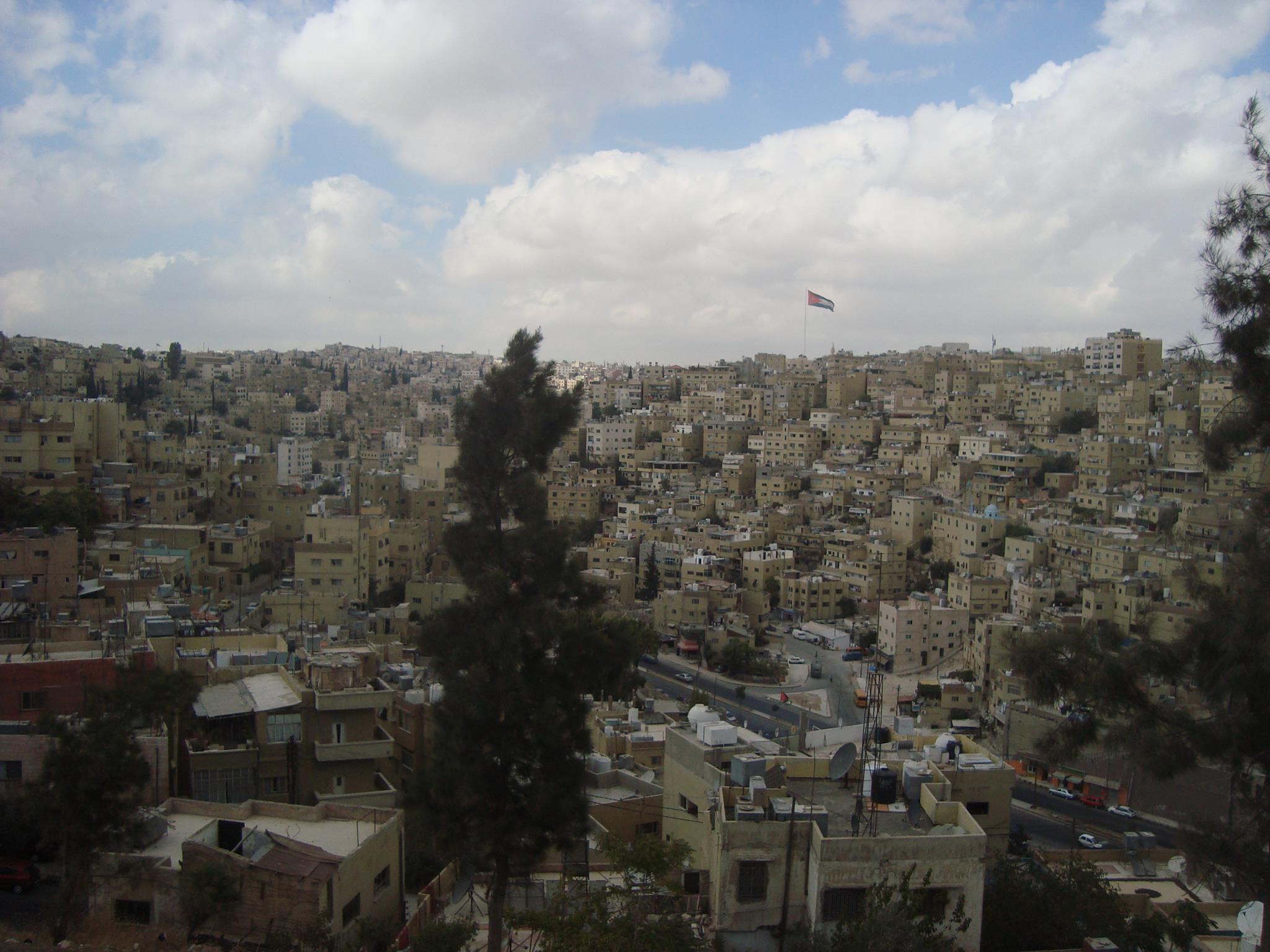 The demonological conception of Islam regards the “jinn” (الجن‎‎), anglicized as “genie”, as a servant of Allah, similar to the human. What makes the subject of magic practices and beliefs in Jordan all the more fascinating is the conflicting relationship of simultaneous opposition and tolerance between religion and “the Occult”. Indeed, Islam does not reject the existence of magic; quite the contrary: several Quranic verses refer to magic-doing, if only to condemn the practice.

When asked by Global Voices whether he believed in magic, Amman-based taxi driver Ibrahim Othman said, “Every Muslim should believe in magic because of the story of Prophet Musa in the Quran”. According to the Chapter of al-A‘raf in the Quran, upon arrival in front of the Pharaoh, Moses had a confrontation with the Pharaoh’s sorcerers, who used black magic to turn their rods into snakes. With God’s approval, Moses turned his rod into a serpent, forcing the sorcerers to kneel before him and accept his prophecies, stunned by the miracle observed.

This episode illuminates the Quranic distinction between magic and miracle, whereby in the words of Ibn Khaldun, one of the most prominent Muslim historians, “a miracle is a divine power that arouses in the soul [the ability] to exercise influence. The [worker of miracles] is supported in his activity by the spirit of God. The sorcerer, on the other hand, does his work by himself and with the help of his own psychic power, and, under certain conditions, with the support of devils”.

In Jordan, the acceptance of the existence of “jinn” and its believed ability to possess people is one of many commonplace magic beliefs, such as the greedy “evil eye”, amulets and Al-matuom — the practice of using the deemed “dirty” menstrual blood to ensure someone’s love towards you.

But from a religious perspective, magic is frowned upon, to say the least. The Imam of Masjed Al-Edlbe in Na’ur, Hashem Ali Osman, summarized religion’s attitude towards magic by explaining that “magic is the deed of the Sheitan (Devil) and teaching, learning, and practicing magic is haram (sin)”.

However, although magic is strictly forbidden, in his concurrent role as the mosque’s sheikh, Ali Osman gets called to dispel magic at least twice a week on average. Because Al-Masjed is perceived as the home of God who has the ultimate power over all creatures, individuals possessed by “jinn” avoid setting foot in the mosque, thus requiring the sheikh to visit their homes.

Over forty men had asked for her hand and yet each engagement had broken off right before becoming official. Desperate, her family invited me to their house to read to her Quranic verses, thought to be the best way to dispel magic. I then began conversing with the ‘jinn’ who possessed the woman and learned that the magical creature had fallen in love with her. Thus, whenever someone came to offer her marriage, the genie would cause her face to temporarily deform. Upon the unpleasant sight of her suddenly ‘monstrous’ face, all candidates would run away with no intention to come back. Yet, once I finished reading the Quran, the jinn left the woman’s body and soon after she got married.

Although religious leaders are unanimous in their view that casting spells on others is an utmost sin, being a sheikh al-sihr (magic sorcerer) is a profitable occupation not without demand. A simple Google search lands pages of results, featuring advertisements of Amman-based sorcerers who profess to “break magic”, “cast magic”, or do both. 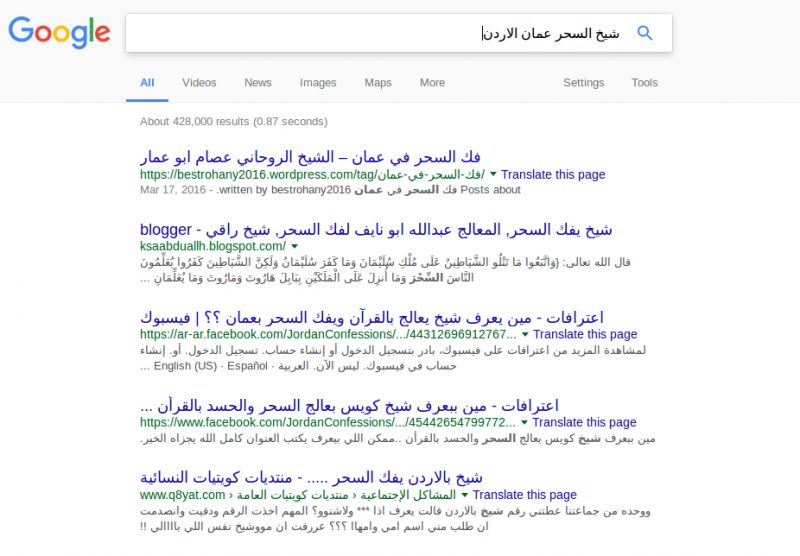 Screenshot sample of a Google search for “Magic sorcerer in Amman, Jordan”.

Financial well-being, marriage and maledictions against others are amongst the biggest motivators for people to seek sorcerers. Animal sacrifice, casting spells over objects belonging to the intended victim, and preparing “bags” with cryptic codes to be left at the cemetery are some of the tools magic spellers use to practice their art.

Interestingly, in contrast to other Muslim-majority countries, Jordan does not have an enforced legislation against the practice of magic. Sheikh Ali Osman explains:

While technically individuals could be fined for practicing sorcery in Jordan, such cases are rare, because if someone complains against magic, he will himself get implicated.

While magic beliefs are popular in Jordan, there are certainly many who disassociate themselves from such thinking. Sammy Abdelrahim, a Jordanian student at Middlebury College, said that he didn’t believe in magic because his “religion will protect (him)”, while University of Jordan student Lubna Mohammad told Global Voices that when it comes to believing in magic, there are great generational differences:

People in the past tried to justify weird events, saying they were caused by magic, because they had no explanation for them. Magic suits my grandmother, while science suits me.

Controversial as they are, magic beliefs hold great importance for many communities in Jordan. Belal Mustafa, a psychotherapist and clinical behavioral analyst at Doctors Without Borders in Jordan, warned that magical beliefs can have significant impact on one’s likelihood to seek psychological interventions when in need:

From the point of view of religion, as well as most people, these beliefs are true. Since psychological problems are so-to-say ‘unobservable’, they are considered as related to these spiritual beliefs.

According to him, explaining that religion and treatment are not in conflict can be challenging:

Many believe that mental health problems are related to faith defects in the person. The problem that psychologists confront is the tendency of people suffering from psychological disorders to attribute magical interpretations to psychological and behavioral problems and to refuse to be psychologically diagnosed or treated.

To Dr. Mustafa, the key lies in raising awareness:

Our job as psychologists isn't to change patients’ minds, but instead to help them live better. We have the responsibility to inform people about mental health — particularly when the symptoms of magical beliefs resemble psychological disorders like psychosomatic disorders or panic attacks.

So, how can we make sense of magic beliefs and their societal impact? The complex nature of magic beliefs positions them in the intersection of religion, superstition and the human desire to define and overcome the unknown. Tayseer Abu Odeh, PhD in Comparative Literature at Indiana University of Pennsylvania, pushes us to rethink our assumptions about magic:

The concept of magic in the Islamic world is a problematic issue, leading to ready-made cultural exclusion. Magic is easily portrayed as uncanny, exotic, inconceivable, and mysterious. One of the central problems that arises emanates from the deeply-rooted discrepancy between the imaginative history of the East, as stretched epistemologically and ontologically within the narrative of Orientalism, and the scientific paradigm of the West, as introduced in tandem with the superior image of the Eurocentric discourse of rationalism and modernism. In a nutshell, addressing magic through the lenses of such dogmatic and essentialist ‘style of thought’ mystifies the microcosmic narrative of magic. It reduces it to a mere form of an Orientalist and Islamic fantasy, or a sentimental pattern of metaphysical interpretation.

Yet, can one escape Orientalism while analyzing the societal, cultural, and psychological interpretation of magic in the Middle East? According to Abu Odeh, treating magic as a cultural and anthropological phenomenon “demystifies and dismantles the fixed misinterpretations and semi-religious myths that have reduced magic to one category of cultural defeatism and atavism”.

In a similar vein, Muslim writer Michael Muhammad Knight argues that the exploration of magic beliefs is critical to understanding the complexity of the Middle East:

Looking at what we might call magic today or throughout Muslim traditions, in many cases it seems to expand the possibilities of what is thinkably ‘Islamic’.

To him, this is a positive social consequence.