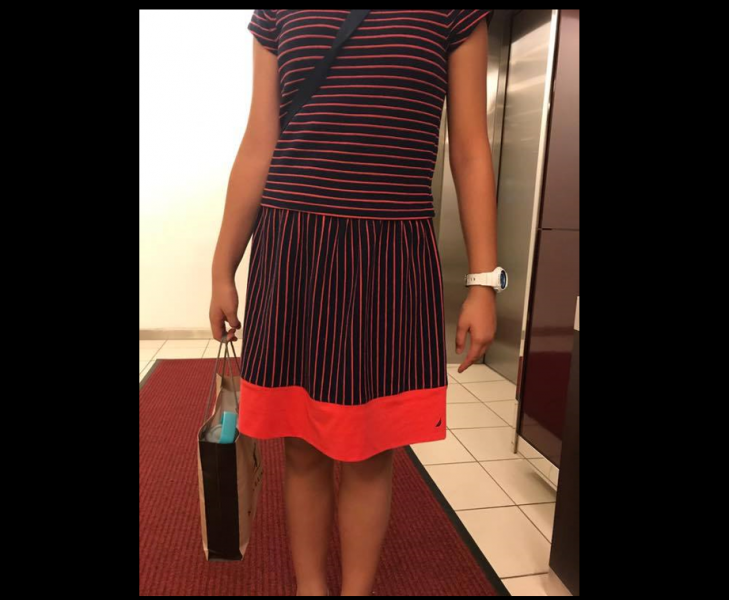 This dress was allegedly deemed seductive by the organizers of the chess tournament. Photo from the Facebook page of Kaushal Kal

A 12-year-old girl withdrew from a national chess competition in Malaysia after some of the organizers said her knee-length skirt was “improper” and violated the tournament’s dress code.

This was revealed by the girl’s coach through a Facebook post which quickly went viral. Kaushal Khandhar wrote that during the tournament, an organizer approached the girl and her mother about the “seductive” dress which is deemed a “temptation from a certain angle far, far away.”

The dress code in Malaysia’s chess tournaments simply states that a player must have a “dignified appearance”.

The mother tried to buy a new dress but stores in the area were already closed. Embarrassed about the accusation of wearing an “improper” dress, the girl withdrew from the tournament.

Kaushal Khandhar uploaded a photo of the girl’s skirt to prove that it was not improper. He added that the girl’s family is demanding an apology from the National Scholastic Chess Championship:

This incident has left her extremely disturbed, and embarrassed.

We are absolutely DISGUSTED by the treatment of Tournament Director to a 12-year-old girl and her mother. This incident has resulted in loss of time and money which was invested before, during and after the tournament on coaching, registration fees, travelling, accommodation and other incurred cost.

I have been playing chess in Malaysia for almost 2 decades and I have never heard this type of issue ever in any tournaments in Malaysia. This should be the first and last time this kind of issue ever appears, I or anyone of us should never accept this in our Chess Community.

The Facebook post sparked public outrage against the organizers of the chess tournament. Some believe it reflects the rising influence of conservative forces and religious hardliners in Malaysia.

The tournament’s director denied that he forced the girl to withdraw from the tournament. He filed a case in the police headquarters after receiving numerous online hate messages and death threats. During a press conference, he said he was being “slandered” because of the issue:

I received abusive messages and threats on Facebook and via email. People used terms like ‘paedophile’ and ‘pervert’. I even looked for messages of support but there were none.

After initially probing the incident, the Malaysian Chess Federation said that the girl was not disqualified because of her dress. It refused to continue the investigation after learning that a case has already been filed in the police.

Based on news reports, the organizers of the chess tournament are denying that they disqualified the girl — which is true because the girl withdrew from the tournament. But they were silent as to whether they called the attention of the girl and her mother about the “improper” dress.

The Women, Family and Community Development Ministry issued a statement urging the Malaysian Chess Federation to look deeper into the issue:

The opportunity for children to participate in this activity is not only a mental stimulus to children but also the chance to mix, exchange ideas, share experience and interact among themselves, from different races, sex, background, economic status and religious belief.

Peter Long of the Institute of Chess Excellence, which is also the Malaysian Chess Federation's National Chess Academy, advised the organizers to apologize to the girl and her family:

Just apologise to the girl, make it right. It’s okay to make a mistake, to be wrong. But it is not okay to cover up, or worst to shift blame, and collectively pretend it is the solution. Do not victimise the girl, her mother or the whistleblowing coach.

Do I have to remind us all that we are talking here about a 12-year-old girl here? I really want to believe that we understand the welfare of the child is of utmost importance.

Writer Terence Fernandez insisted that “the police should not only be looking into the claims of the breach of dress code but the fact that a child was possibly sexualised by an adult.”