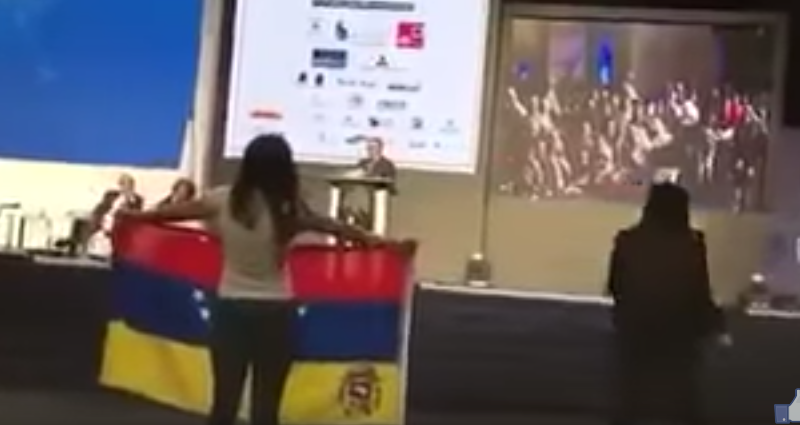 “We're being killed”. Screenshot of video shared by Vine Venezuela on YouTube showing the two protesters in front of Tarek William Saad.

The presence of Venezuela's ombudsman, Tarek William Saab, in Beirut was not met kindly by Venezuelans in Lebanon, who organized protests to denounce violence in ongoing demonstrations in the Latin American country.

The ombudsman, whose official title is Public Defender of the Bolivarian Republic of Venezuela (Defensoría del Pueblo de la República Bolivariana de Venezuela), was supposedly giving a speech on human rights in Beirut. Critics denounced his trip to Lebanon in the middle of the political crisis that has seen weeks of protests, in which 30 people have been reported killed as of May 4, 2017.

The most recent protests in a country that has seen political turmoil for years started when the Supreme Court of Justice effectively nullified the National Assembly on March 30. Despite the decision being short-lived, the widely unpopular government of Maduro, which has overseen a three-year-long economic crisis and record levels of violent crime and poverty, has inspired a growing opposition to his policies.

Two Lebanese-Venezuelan women interrupted Saab's speech while holding the Venezuelan flag upside down (one of the main symbols within the current protests) and yelling “My people are dying! We're being killed! Where are [those human] rights, Tarek?”

Martyrs’ Square in Beirut, a highly symbolic location where, for example, Lebanon's YouStink movement gathered to protest in the summer of 2015, saw a concentration of people banging on pots (a common way of protesting in Latin America).

The following video shows protesters outside the hotel where Saab was residing, near Martyrs’ Square.

The video of the two women quickly went viral and made #Líbano (#Lebanon) a trending topic in Venezuela. Some users took the opportunity to spotlight the crackdown taking place in Venezuela at the same time that he was in Beirut:

Look, Tarek William Saab, [this is going on] while you're eating hummus in Lebanon

Those who don't practice Human Rights #Venezuela, can't talk about them or represent the nation in #Lebanon

How does it feel not even being able to go to Lebanon without being dogged by the reality that you're so badly trying to block on Twitter?

What nerve. Tarek WIlliam Saab, who should ensure the Human Rights of Venezuelans and doesn't do it, goes and talks about Human Rights in #Lebanon.

I don't know what amazes me more, that scoundrel talking about human rights in a country like Lebanon or the incredible courage of those women #Dictatorship

There are an estimated 400,000 to 800,000 Venezuelans of Lebanese descent, the largest population of Lebanese in Latin America outside of Brazil and Argentina. Venezuela's current vice president, Tareck El Aissami, is of Syrian-Lebanese origins.