‘We Are Not Slaves, We Want Our Rights': Lebanon's Migrant Domestic Workers March on Labour Day 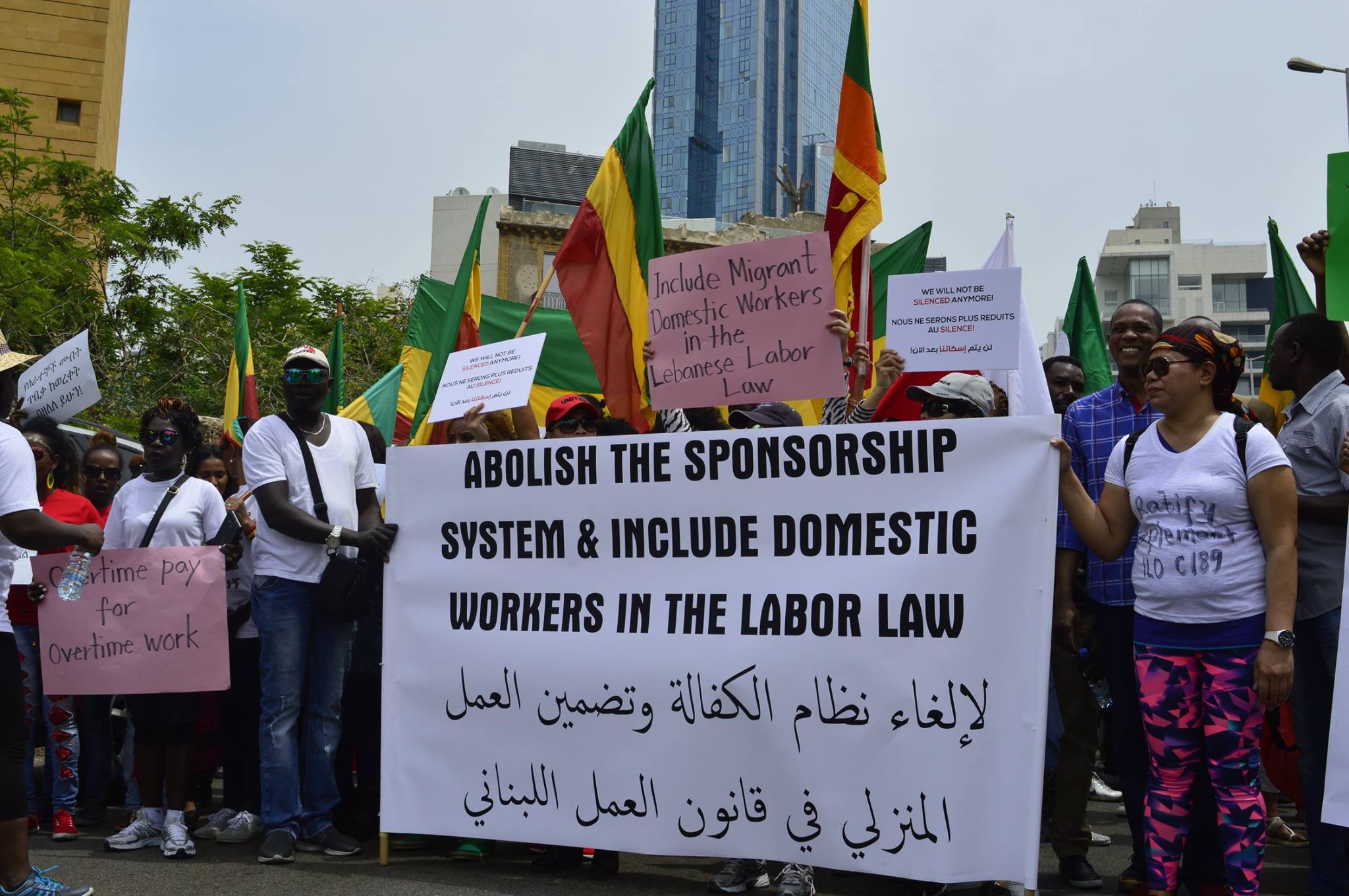 For the eighth year in a row, migrant domestic workers (MDWs) from many nations marched to demand their labor rights in Beirut, Lebanon on Sunday April 30, 2017.

The march commemorated May Day or Labour Day, which fell on Monday, but as Sunday is the only day off for most migrant domestic workers in Lebanon, April 30 was the only option.

Migrant domestic workers in the country are often mistreated. One worker from Madagascar, Julia, who was at the march, explained:

The march was organized by The Alliance of Migrant Domestic Workers in Lebanon, which “aims to empower women who are MDWs in Lebanon in the quest for labor rights, and fight against discrimination.”

Global Voices contributor Hassan Chamoun was at the march. Participants walked and shouted slogans such as: “We are also humans” and “down with the Kafala system”, referring to the country's sponsorship system governing migrant domestic work. They also chanted: “All we are saying is, give us our rights”, a riff on John Lennon's song “Give Peace a Chance”.

Another chant was “Ratify, implement convention 189!” referring to the convention written by the International Labor Organization. If implemented in Lebanon, this would mean that the government is legally bound to abide by labour laws and migrant domestic workers believe that this would at least alleviate the terrible working conditions in the country.

Throughout the march, several migrant domestic workers watched from balconies, unable to join the march themselves. Some were waving at the protesters while others just looked on. 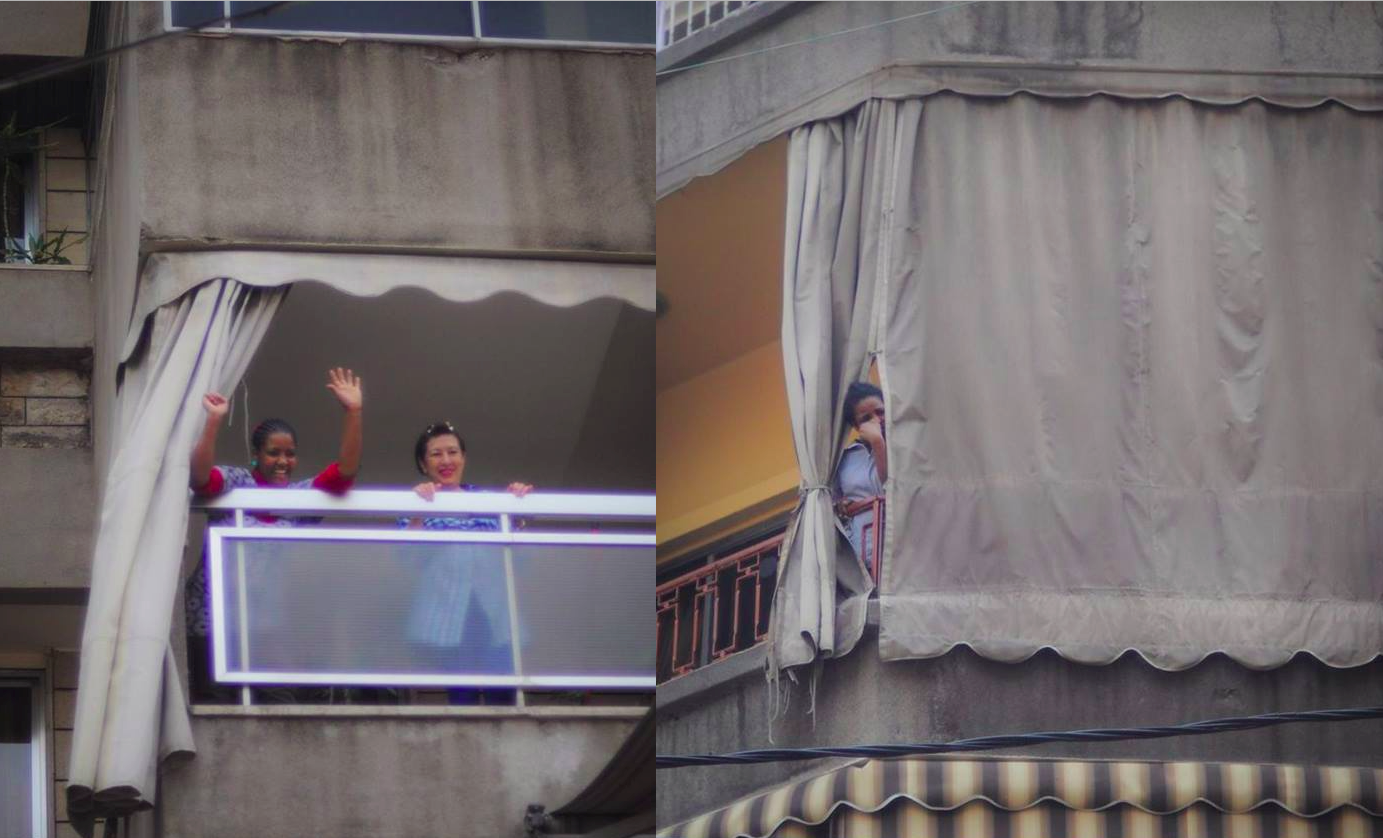 Speaking to Global Voices, many migrant domestic workers expressed their desire for Lebanon to recognize their rights.

Miriam, a worker from the Philippines, said:

Every year we ask about this so it's time to abolish [the kafala system].”

As the advocacy organization Migrant-Rights.org explains, the set-up makes these workers vulnerable to abuse: 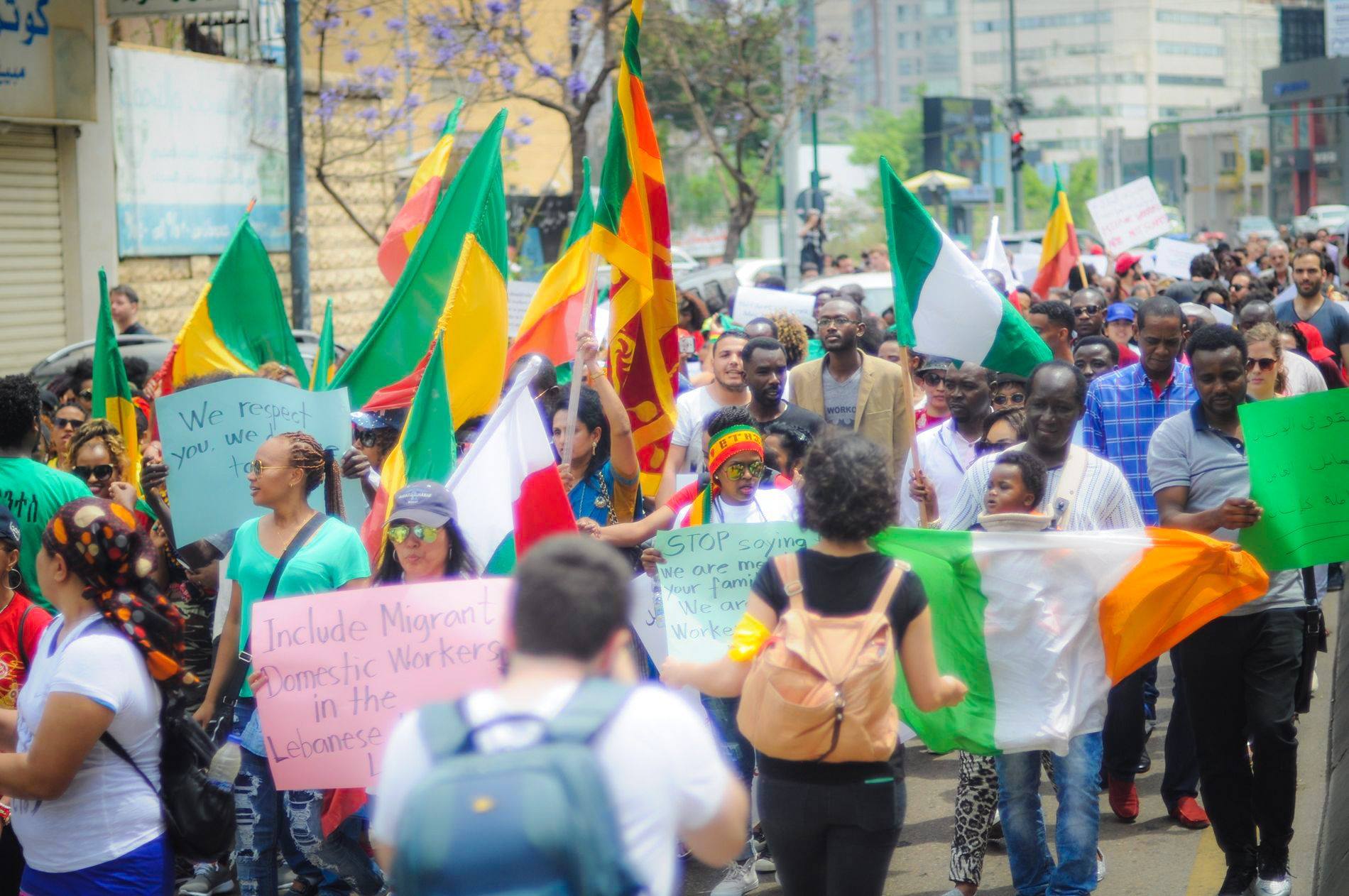 The march was also a celebration of the culture and heritage of MDWs in Lebanon. Flags of Ethiopia could be seen flown alongside flags representing the Philippines, Sri Lanka, Madagascar, Nepal and others. Workers Day March in Beirut. April 30, 2017. Photo taken by Pat Sy. Source: Facebook.

Abdallah, a worker from Sudan, also declared “it is time to change the Kafala system”. A worker from the Ivory Coast said “we are maltreated here and we want a better life.” Another worker, from Sri Lanka, said that “we are not slaves, we want our rights”. And finally a worker from Bangladesh said, “We need freedom in Lebanon” while holding a sign on which was written: “Kafala System = 2017 Slavery”.

As their arrived at their final meeting point, Beirut's Raouche neighborhood, protesters held three minutes of silence for those who lost their lives in Lebanon. It is estimated that migrant domestic workers in Lebanon take their own lives at least once a month due to the brutal working conditions.

In fact, one could see a sign which read “stop labeling every murder as a suicide”, referring to the widespread belief that often those who are described as having killed themselves were in fact murdered by their employers. 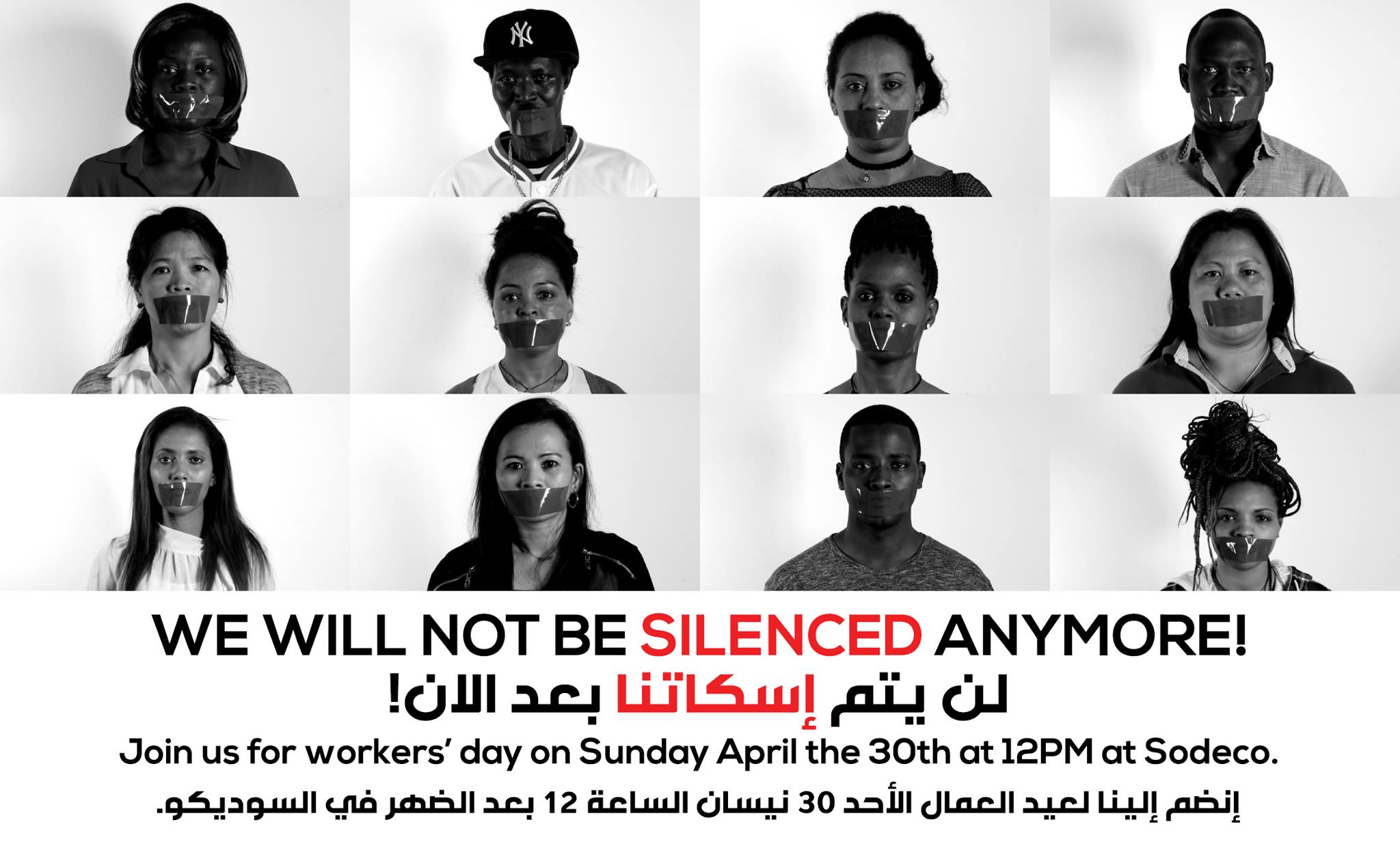 Protesters also remembered those who were recently deported, most notably prominent unionists Sujana Rana and Roja “Rosie” Maya Limbu, both from Nepal, in December of 2016.

As was reported on Global Voices at the time, Lebanese officials refused to provide formal grounds for their arrest and deportation, leading many human rights groups and labour unions to suspect that it was their work in the high-profile role in the Domestic Workers’ Union, which Rana helped found, which got them deported. 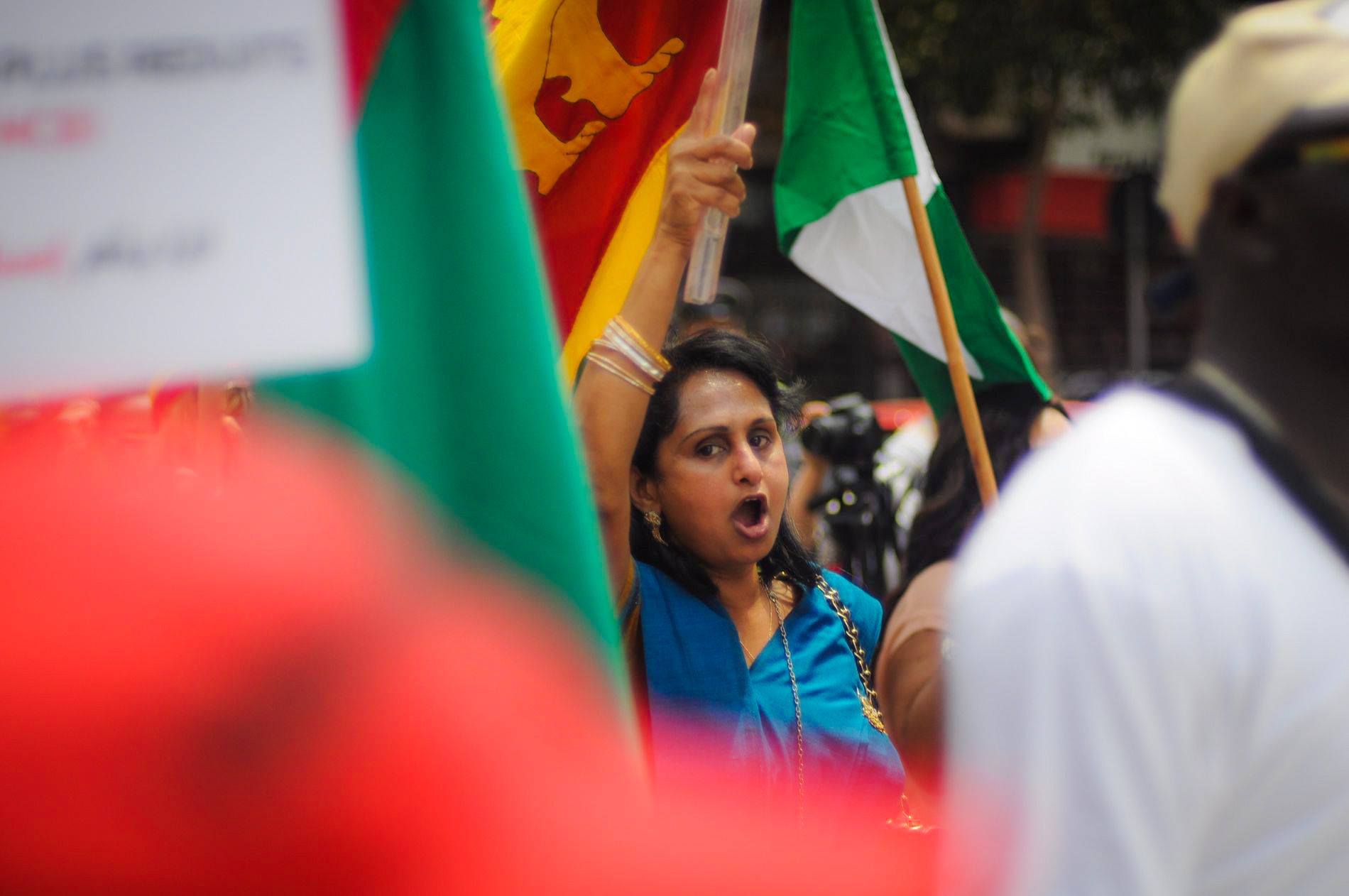 The protesters then read a speech in Arabic, English and French, and made nine demands to the Lebanese government. They are:

1. Abolish the sponsorship system (Kafala) and replace it with a just immigration and residency system that guarantees human rights, fair and ethical recruitment, labor mobility, and the possibility of MDWs to live outside the employer’s house and change employers.
2. Ratify and implement the ILO Domestic Workers Convention of 2011 (C189).
3. Expand the Lebanese labor law to cover all categories of laborers including domestic workers.
4. Reform the standard unified contract to guarantee basic rights including the rights to get the Lebanese minimum wage, terminate the employment contract, have a maximum hours of work and be paid for overtime, the rights to privacy and decent working and living conditions, the right to have a weekly day off outside the house and unaccompanied by employers, and the right to have proper health insurance.
5. Hold abusive employers accountable and establish an inspection mechanism coupled with accessible and affordable complaint mechanisms, fair and speedy trials and legal redress.
6. Hold to account and close down all abusive and unethical recruitment agencies and establish a black-list system for these.
7. Guarantee the right of domestic workers to organize and unionize.
8. Investigate properly the deaths of MDWs, and in case of unnatural deaths, bring to justice those who caused these deaths.
9. Stop state violence against MDWs including detaining MDWs who leave their employers’ houses, exercising violence in detention centers and police stations, and depriving MDWs’ children of legal residency.

Hassan Chamoun works with the Anti-Racism Movement and Joey Ayoub was a volunteer with the Migrant Community Center between 2013 and 2014.