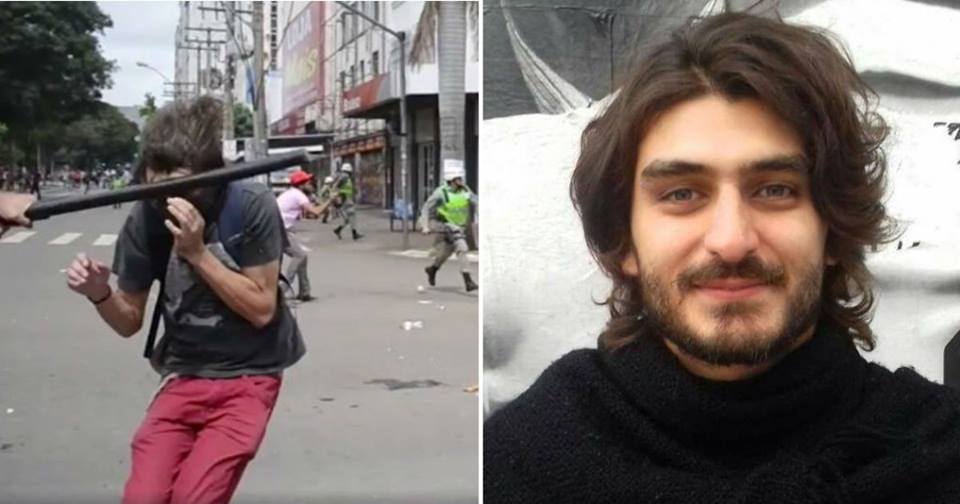 A 33-year-old Brazilian student is hospitalized in intensive care this week, after a police officer hit him in the head with a baton during a demonstration in the city of Goiânia last Friday, when millions of people joined a nationwide strike against austerity reforms.

Mateus Ferreira da Silva, who studies social sciences at the Federal University of Goiás, sustained a traumatic brain injury and multiple fractures. Doctors operated on him this Saturday, and he's now in an induced coma. His condition is considered critical. [Update May 3: Mateus’ condition has improved and isn't life-threatening anymore].

Local photojournalist Luiz da Luz captured the assault on film, and his footage has spread rapidly throughout Brazil over the past few days. The images also reveal the face of the officer wielding the club: a man who has since been identified as Captain Augusto Sampaio.

Following the incident, military police in the Brazilian state of Goiás announced that Sampaio has been suspended from active duty, pending the results of an investigation.

The sequence of photos shows that the military police officer broke his baton on the face of student Matheus Ferreira in Goiânia (photos: Luiz da Luz).

If a police were in intensive care after being beaten by a protester, his face would be on TV for six months and all repression would be justified.

The Facebook page “Desneuralizador”, an outlet of media activists from Goiânia, shared the video recorded by Luiz da Luz, showing the moments after Mateus was clubbed in the head, as paramedics tended to him.

Another video showing the same moment from another angle have also appeared on social media. In the clip below, the beating occurs at 00:50.

Internet users have already crowdfunded 10,000 Brazilian reais ($3,150) for Mateus’ family, who lives in another state, to cover some of his medical expenses and to house his relatives in Goiânia, while he's hospitalized. 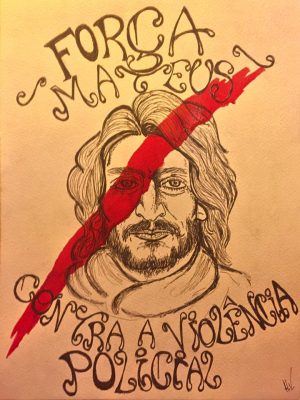 Writing on Facebook, Professor Pablo Ortellado remembered other episodes of violence against activists in Goiás:

Goiás is experiencing a surge of political violence: It was there that the activist Guilherme Irish was murdered by his father to support the Occupy Movement in secondary schools; it was there that the military police joined a WhatsApp group meant to criminalize teachers; it was there that an occupied school was sabotaged with a gas leak; and now we have the very sad case of Mateus Ferreira da Silva, in intensive care after being assaulted in the head with a baton by a police officer.

Goiás was not the only state in Brazil where police cracked down brutally on demonstrators last Friday.

In Rio de Janeiro, riot police fired rubber bullets and tear gas at protests in the city's center, where demonstrators had erected a stage for speakers. Speaking through a loudspeaker, state deputy Flavio Serafini, from Brazil's Socialist and Freedom Party (PSOL), pleaded with police to refrain from violence against the protesters. As Serafini spoke, police launched a tear gas canister at the stage, hitting the person who filmed the video blow:

This 25-minute video by an unknown author captured different moments of the crackdown in Rio and demonstrators’ failed attempts to regroup in a growing cloud of tear gas.

Police also dispersed a protest in São Paulo, as people marched towards President Michel Temer's residence, located in the upscale neighborhood of Alto de Pinheiros (and heavily guarded by police since he took power in May last year).

Police also detained activists from Brazil's Homeless Workers’ Movement and later charged them attempting to start fires and trigger explosions. According to the movement's Facebook page, the activists are still in jail.

Activists also criticized Brazil's oligarch-owned media outlets’ coverage of the protests, including a report by Folha de S. Paulo, one of the country's oldest newspapers. 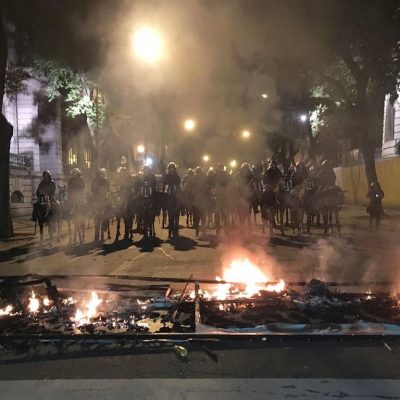 Police officers in front of a barricade in Rio de Janeiro. Photo by Erick Dau/The Intercept, used with permission

According to story about Mateus Ferreira published in Folha de S. Paulo on Sunday, the attacker was allegedly a man “dressed as a military police officer.” This language was later redacted.

Professor Idelber Avelar wrote on Facebook about the mainstream media's typical emphasis on protests: traffic disruptions and broken windows, rather than police repression or the demonstrators’ demands:

Once again, the Brazilian press chose to cover street protests by focusing on this incredible protagonist: the glass pane. Folha de S. Paulo and Estado de S. Paulo chose a photo of a glass window being broken to illustrate their front pages. O Globo on the other hand favored a photo of a bus set on fire.

There isn't a journalistically plausible reason to justify a broken glass window receiving more coverage than the gathering of thousands of people on a square to defend a cause. You could keep being radically against any scratch on any material property and, still, acknowledge this fact. Again, the term “vandalism” receives an absurdly disproportional emphasis and the typical acts of violence by the military police are covered as “demonstrators enter confrontation against the PM.”