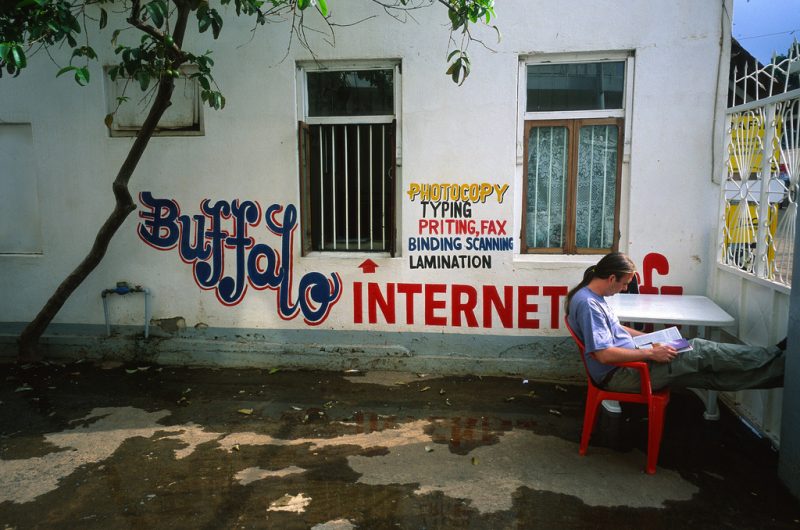 A sign for an Internet cafe in Tanzania. Tanzania is one of the top 10 countries with most Internet users in Africa. Creative Commons photo by Flickr user Aslak Raanes.

Grace Mutung'u is an associate of the Kenya ICT Action Network (KICTANet). She is currently an OTF Senior Fellow in Information Controls at the Berkman Klein Center for Information and Society.

Those who have been watching this trend rise in recent years cannot fail to see the poetic justice in the move. Nevertheless, if it were actually implemented, it is not clear that it would achieve the desired effect.

AFRINIC is the Regional Internet Registry (RIR) for Africa responsible for allocating IP addresses and numbers in the continent. In the proposal, published on 10 April 2017, the authors define an Internet shutdown as having occurred when:

…it can be proved that there was an attempt, failed or successful, to restrict access to the internet to a segment of the population irrespective of the provider or access medium that they utilize.

It goes on to recommend that governments that implement shutdowns be denied access to IP addresses and numbers for a period of 12 months. Those found to have implemented three or more shutdowns within ten years would have their resources revoked for five years.

Andrew Alston, one of the proposal's co-authors, explained the rationale behind the proposal:

…it goes to a question that has been lurking in the background for a long time and I believe the time is now to have that discussion. What role do the community, the I* organizations and other internet structures have when faced with abuse of power by state actors? ((i* organisations are African Internet governance organisations eg AFRINIC, AFPIF, ISOC https://www.afrinic.net/images/doc/af_brochure.pdf)

But these restrictions would apply to not just government entities, but also to parastatals and entities that have direct relationships with the government in question. This could affect a lot of people, many of whom may have been opposed to the shutdown in the first place.

If governments were to go offline, the effect would unquestionably be felt by the public.

The proposal has lit debate on what the role of Internet registries such as AFRINIC ought to be. The AFRINIC Board had earlier expressed concern about the rising trend of shutdowns, stating that they were a threat to the open nature of the Internet. Since 2011, there have been intentional network disruptions, commonly referred to as shutdowns, in 18 states in Africa. In 2016 alone, 18 shutdowns were recorded in 11 countries and from January 2017 until mid-April, there was an ongoing shutdown in Anglophone regions of Cameroon. All of these shutdowns have happened during political moments such as elections and protest.

Other than the obvious disruption in social ties, shutdowns have significant economic effects. But at a policy level, they also invoke the question of the vision and intent of African governments when it comes to the Internet.

Governments speak of leveraging information and communications technology (ICT) to achieve development goals such as SDGs or Agenda 2063 in the African Union. But shutdowns are contrary to these development aspirations — and the very same governments that have committed to these goals are also implementing shutdowns. For example, the three-month shutdown in Cameroon forced those who were relying on the Internet for their businesses to abandon those businesses or move to other towns.

List commenter Seun Odejedi expressed concern about the implications of the proposal for people apart from government leaders and employees:

…there is a proverb that says “if we are to burn a snake in its length we will burn the house as well”. We should be very careful what we ask at RIR policy level because in the long run, it would not hurt the government more than AFRINIC members (current and future).

The proposal is currently under consideration by the AFRINIC community, which is comprised of technical and policy experts in the region. Some say they are uncomfortable with an RIR taking up the role of policing use of the Internet. Others are concerned about the effect of the proposal, as denying governments resources could limit their abilities to deliver public services through the Internet — this could have significant impact in countries like Rwanda, where the government is moving services such as business registration online in an effort to improve efficiency. On top of these concerns, massive amounts of public information are primarily available on government websites, such as laws and location of services. If governments were to go offline, the effect would unquestionably be felt by the public.

Then there is the question of ICT markets in Africa. Countries like Ethiopia, which had three shutdowns last year, have a single, state-owned ISP. This means that denial of resources to the Ethiopian government and related entities would result in lack of resources for the whole country. While more African countries have liberalised their ICT markets, there are only few countries in the continent that have attained perfect competition. Many have one, two or three dominant players and these are the ones through which governments affect shutdowns. The proposal would therefore have to be reworked so that its negative effects on the public would be minimal.

Remedies and penalties aside, local experts continue to debate the question of whether shutdowns are a matter of poor policies or a sign of weak rule of law. Some of the listers take the view that the decision to shut down the Internet in any African country comes down to one person – the person in power. Each of the network disruptions experienced last year can be pointed to a particular ruler. For instance, Uganda’s social media blackout can be credited to President Museveni and Zimbabwe’s to President Mugabe. There is a school of thought that shutdowns in Africa will end when principles such as plurality and equitable development are respected.

The AFRINIC proposal is novel — it pushes the boundaries of the role of the organisation and it encapsulates the frustration that many face when they find themselves without the Internet and when the decision to shut down the Internet is taken arbitrarily and without warning. Whether the proposal is carried forward or not, it has ignited an important conversation that will likely be taken to the Africa Internet Summit in Nairobi later in the year. Because at the end of the day, Africans must craft a solution to the dangerous trend of shutting down the Internet during political moments.