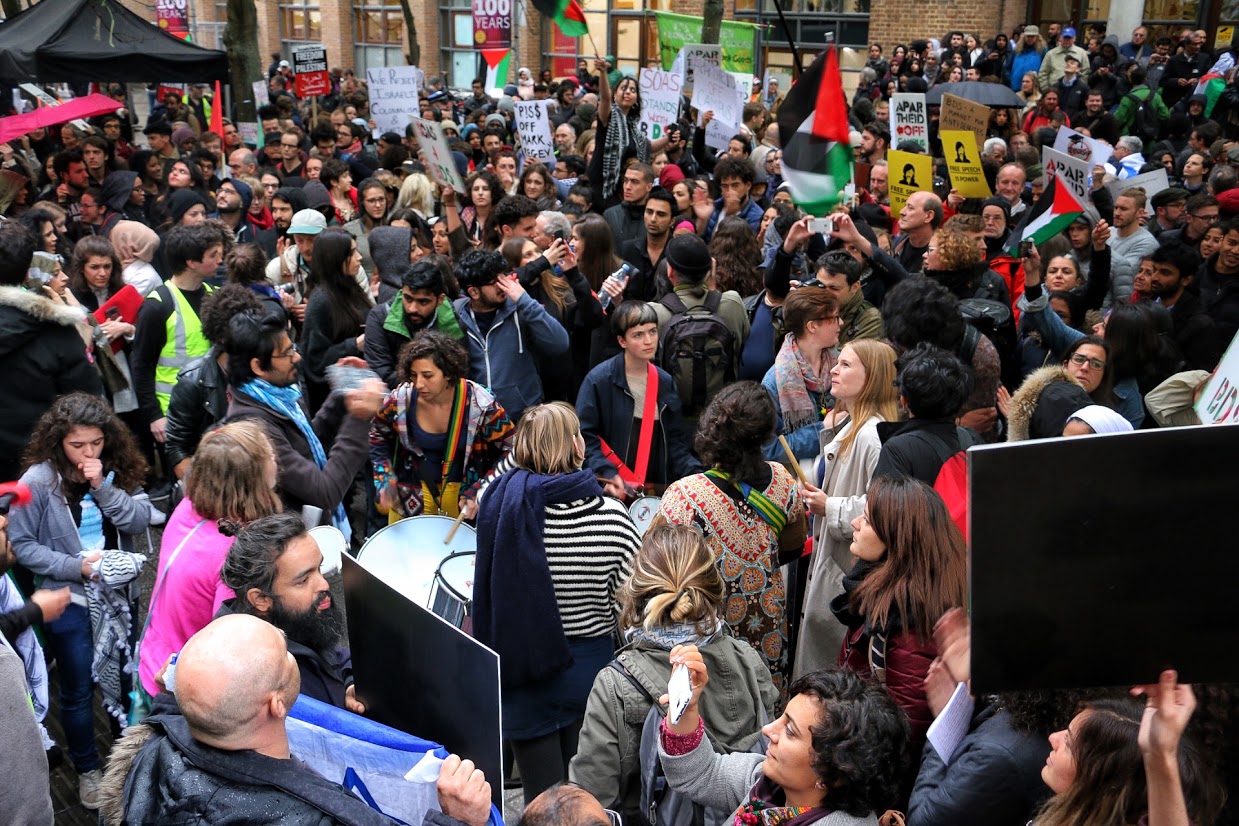 SOAS students and staff gathering in front of the main building. Photo used with permission.

When the Israeli ambassador to the UK, Mark Regev, decided to give a speech at SOAS, University of London on April 27, 2017, he may have not anticipated that he'd attract a greater audience outside the building than inside of it.

But that's what happened. Hundreds of SOAS students and staff gathered outside the building hours before the talk was scheduled in opposition to Regev.

There was also a counter protest by a smaller group of about 60 demonstrators supporting Regev.

The protest against Regev was organized by “Apartheid Off Campus”, a coalition of SOAS staff and students including over 40 student societies and over 100 SOAS staff members. The coalition produced a number of petitions and open letters, notably including both the SOAS Israel Society and the SOAS Palestine Society as signatories, symbolizing the college-wide outrage over the university giving Regev a platform in his capacity as an official representative of the state of Israel.

Regev is a well-known personality in the UK as he often appears on British media outlets to defend his government's policies toward Palestinians.

The Apartheid Off Campus coalition criticized on its Facebook page these positions:

He is being given the cover of an academic setting to put forward official state positions on the on-going expansion of illegal settlements, the siege of Gaza, land thefts, and discriminatory laws imposed on Palestinian citizens of Israel. This is not an academic debate, informed by fact and reason, it is an official exercise in state propaganda.

Shrinking space for criticism of Israel

Regev's visit happened as the UK government has been cracking down on anti-Israel activism by using a vague definition of anti-semitism put forward by the International Holocaust Remembrance Alliance; critics have argued that it confuses criticism of the state of Israel, its policies and support for Palestinians with antisemitism.

An example: In an open letter to The Guardian published on February 27, 2017, over 200 academics from the University of Central Lancashire denounced the university's decision to ban a meeting by journalist Ben White as well as academics entitled “Debunking misconceptions on Palestine”. The university cited the government's new definition of anti-semitism as the reason for banning the talk.

UK officials encouraged universities to adopt this new definition and specifically mentioned the Israeli Apartheid Week, an international event which aims to build support for the Boycott, Divestment and Sanctions (BDS) movement, the global campaign attempting to increase pressure on Israel to end the systematic oppression of Palestinians. BDS counts support among the UK's academic community; in October 2015, over 300 UK scholars announced a boycott of Israel and its educational institutions “until Israel complies with international law.”

It is in the context of growing concern on university campuses over the suppression of criticism of Israel that Mark Regev's visit should be understood.

This was the case at SOAS, where the student society that invited Regev, the SOAS Jewish Society, had to find a non-SOAS academic to chair the event.

Enjoyed an engaging discussion about Israel & Middle East with @SOAS students. Thanks to SOAS JSoc, Chair Prof @Eric_Heinze_ & all who came. pic.twitter.com/6Z0LSC83FT

Dr Yair Wallach, a lecturer in Israeli Studies at SOAS, was asked to chair the event but declined. In a Facebook post which was shared on the SOAS Blog, Wallach argued that while the talk should go ahead, he was not in favor of it:

Ambassador Regev is not a scholar or a public intellectual. He is a PR speaker representing the viewpoint of his government, a familiar face from UK TV channels, known for his polarising style. The spectacle of an official Israeli emissary visiting SOAS, with all the heightened security measures, attracts attention and controversy, but the intellectual value of an address by an official state spokesperson is questionable.

Another society, the Model United Nations Society (MUN Society), was rumored to be supporting the event but released a statement to the contrary and added its name to the petition. 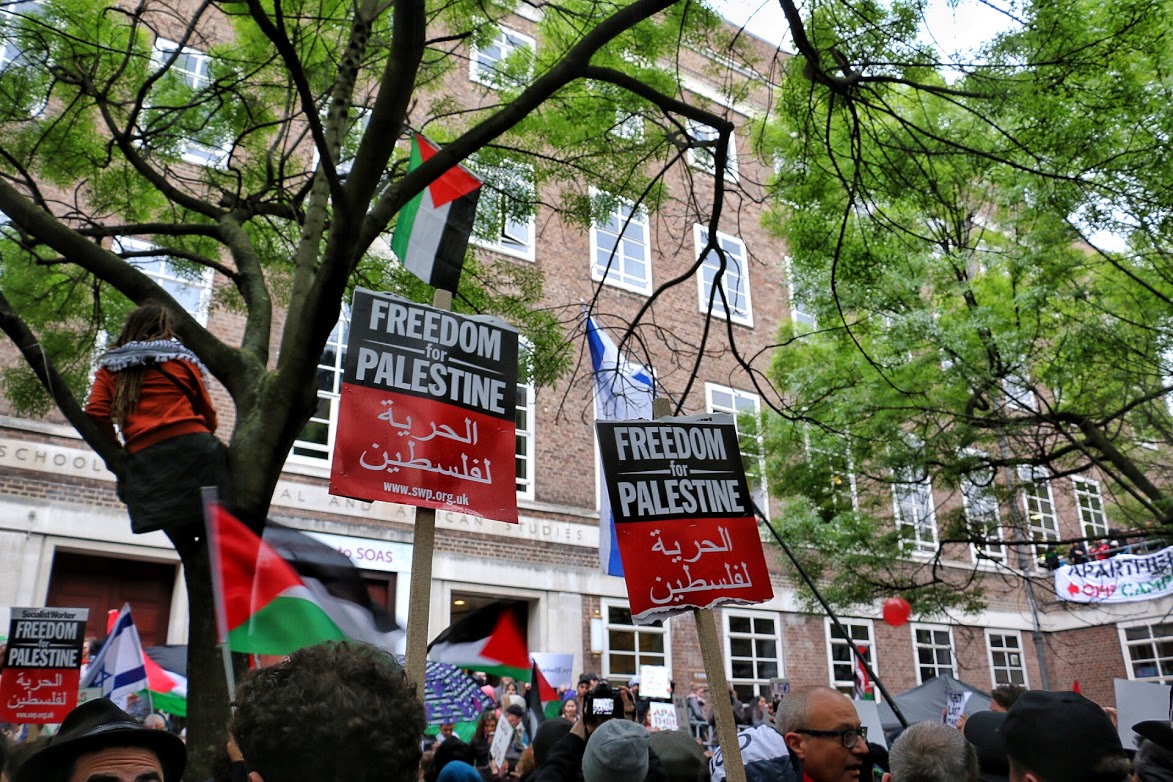 Palestinian flags seen next to Israeli flags in front of the SOAS main building. Photo used with permission.

The environment that Mr. Regev would create on our campus for the event is unsafe for us as Palestinian students, many of whom have suffered directly at the hands of the Israeli security services.

A ‘double standard’ for free speech?

Gilbert Achcar, professor of development studies and international relations at SOAS, argued that the protest was an even greater example of freedom of speech than anything Regev represents:

Does the state he represents grant the SOAS community “freedom of speech”? Anyone wondering about this should ask our colleague Adam Hanieh: he has been banned from entering the state of Israel and therefore the occupied West Bank (which was his actual destination) for nothing but his political opinions. Likewise ask the many students who were denied entry under similar conditions. Didn’t the Israeli state officially decide to ban any supporter of BDS (a non-violent form of protest par excellence) from entering its territory? This new law has recently been used to ban Kamel Hawwash, Professor of Civil Engineering at the University of Birmingham, from entering Israel.

The anti-BDS law referred to here, put forward by the pro-settlement Jewish Home party, was approved in March 2017 and bans anyone found to support BDS from entering Israel. In a 2015 SOAS student referendum, the majority of students and staff voted in favor of BDS, but SOAS administration has so far refused to implement it.

Achcar gave the example of Palestinian academic Dr. Adam Hanieh, senior lecturer in development studies at SOAS, who was detained at Tel Aviv's Ben Gurion Airport in September 2016, questioned for 10 hours and then banned from entering for 10 years. As Israel controls all access to the occupied West Bank, this in effect means that Hanieh cannot visit Palestinian universities before 2026.

Hanieh had been invited by Birzeit University, north of Ramallah in the central West Bank, which condemned the move as a violation of freedom of speech, describing it as “part of a systematic policy of denial of entry to international academics, professionals and activists intending to visit Palestine”.

Despite repeated requests, the Israeli government did not give SOAS a reason for its decision, leading SOAS to officially conclude that “this is an arbitrary breach of academic freedom,” adding that “this is not the first time that members of the SOAS community have been denied entry to Israel.”

Israel’s Ambassador Mark Regev certainly enjoys much more “freedom of speech” in the UK than most of us: it is much easier for him to get his opinion through the mass media in this country than for any of our academics, not to mention our students. Does this give him a “right” to speak at an academic institution? We need first a clear criterion that prevents any “double standard”. Here is a minimal criterion: for an official state representative to have a right to “freedom of speech” at SOAS, s/he must represent a state that offers us likewise “freedom of speech” on its territory.

Joey Ayoub was a master's student at SOAS and a member of the SOAS Palestine Society between 2015 and 2016.