Navalny's Army Unmasks the State-Supported Radicals Out to Get Him 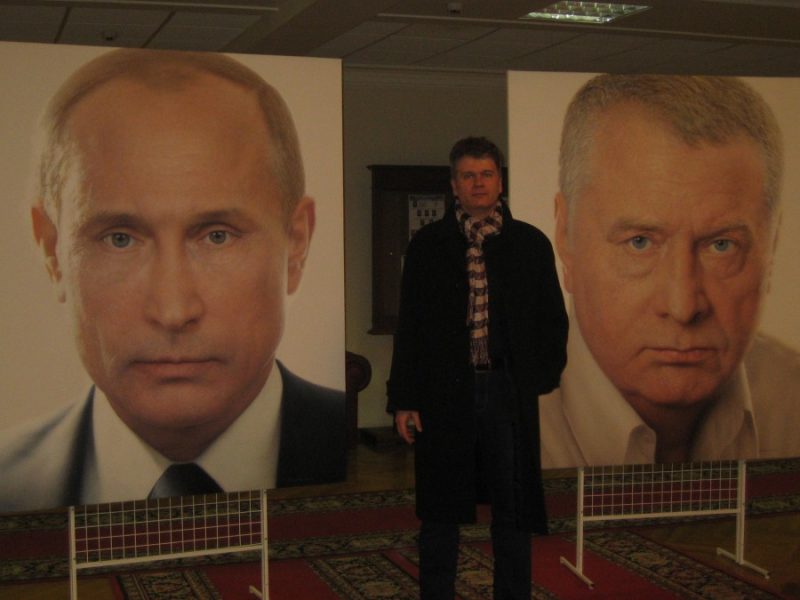 This Monday, opposition leader Alexey Navalny proved how useful it is to have millions of supporters among Russia’s young, energetic Internet users. Days after Navalny was attacked outside his office in Moscow, his supporters rallied online to identify the likely culprits: activists from a movement called “South East Russian Bloc,” better known as SERB.

On April 27, outside the Moscow office of the Anti-Corruption Foundation, a man sprayed Navalny in the face with green antiseptic. The assailant immediately fled the scene, and Navalny was briefly hospitalized with what turned out to be a chemical burn to his right eye. Doctors now worry the solution may have been mixed with something other than green dye, given the severity of Navalny’s injury, which could mean permanent damage to his vision.

Within hours of the attack, using his new live YouTube channel, Navalny shared security camera footage from inside his office building, showing the attack through the front rotating door.

This week, Navalny’s supporters got to work.

The security camera footage was grainy and low-res, but it was enough to jog one person’s memory. On Monday, a Twitter user named “Mr. Radmir” wrote in his blog that he recognized the attacker in the video: Alexander Petrunko, a notorious SERB activist.

And this isn’t the only footage of the attack against Navalny. On Sunday, the pro-Kremlin television network Ren-TV aired a different video (apparently recorded by someone who knew the attack was coming), for some reason blurring the faces of two men — the attacker and a bystander.

Within hours, however, the second man’s face was all over the Web, after a Navalny supporter named Eugene Bryzgalin discovered that Ren-TV’s website actually contained another three versions of the attack footage, including one video where the bystander’s face was visible.

This second man was Alexey Kulakov, another member of SERB, who later confessed (reluctantly) to the newspaper Novaya Gazeta that he was present for the attack on Navalny, though he insists that he didn’t know what would happen. “I only went there to film on my camera. A person called me and said that something was being planned at that place,” Kulakov said, refusing to reveal who called him.

Here's a better photo showing that they know each other.

Meanwhile, Internet users have unearthed several photographs suggesting that Kulakov and Petrunko are indeed acquainted, which makes sense, given their membership in the same small radical political faction. 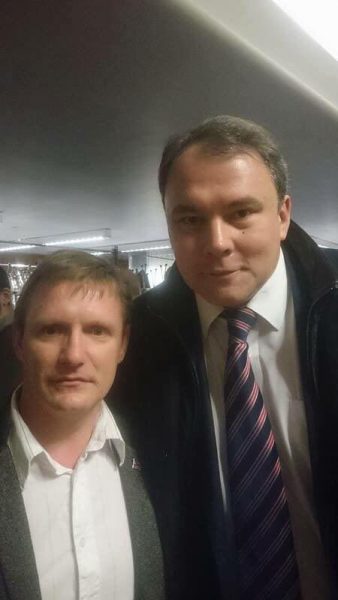 Until now, Petrunko was best known for splashing a foul-smelling liquid (some say it was urine, others say it was a chemical, and Petrunko himself once claimed it was mud from Crimea) at photographs of naked children by Jock Sturges at a controversial exhibition in Moscow. He spent a week in jail for that stunt, earning himself a reputation as a moral crusader out to snuff out pedophilia.

After his release, in an interview with the website Znak.com, Petrunko said he had experienced various terrors growing up in an orphanage, and even assisted Rostov police as a young man in their 10-year hunt for Andrey Chikatilo, the Soviet serial killer who murdered at least 52 women and children between 1978 and 1990.

Prone to moral crusades, Petrunko later joined the “Russian Spring” movement and even traveled to Ukraine, and participated in the ill-fated takeover of the Kharkiv’s regional administration in April 2014. For his acts, Petrunko was taken prisoner by Ukrainian security forces, who he says “kidnapped and tortured” him.

This Monday, Navalny shared a photograph (see above) showing Petrunko standing with Pyotr Tolstoy, the deputy speaker of the State Duma, the lower house of Russia's parliament. It's unclear what the two were doing together.

SERB’s leader is a man named Igor Beketov, who often goes by the name Gosha Tarasevich. A professional actor and, in his own words, a Soviet basketball champion, Beketov created SERB in Ukraine, where he lived most of this life. Originally called the South East Radical Bloc, Serb was formed in Dnepropetrovsk as a movement to promote the “Russian Spring” as Ukraine’s Yanukovych regime collapsed.

In March 2015, Beketov spoke to the website Medialeaks.ru, saying he relocated to Russia when Ukrainian police “fabricated a criminal case against [him] for treason.” A couple of SERB activists followed him to Russia, but Beketov says most of the group’s new cadres joined after the move.

Today, SERB’s main targets are members of the Russian opposition, and Beketov talks openly about “mounting attacks” against anyone who “insults Russia, the president, or Crimea.” Beketov even said the group would defend any Russian president — not just Putin — and stressed that SERB refrained from attacks on Alexey Navalny because he has stated he would not return Crimea to Ukraine, if he became president.

In the past, SERB activists have worked with Igor Brumel, a local lawmaker in the Moscow region and a member of the political party A Just Russia. Last October, Brumel and Petrunko broke the nose of an activist guarding the makeshift memorial to Boris Nemtsov on the Bolshoy Moskvoretsky Bridge in Moscow. Police later charged the victim (not Brumel or Petrunko) with hooliganism.

Last August, Beketov also led a group of SERB activists in an attack against a crowd of anti-war protesters in Moscow. When the fighting broke out, a police officer intervened, and Beketov even punched the officer in the face.

SERB’s moratorium on attacks against Navalny expired in February 2016 (about a year after the Medialeaks interview), when Petrunko smashed a pie into Navalny’s face outside the Moscow office of the Anti-Corruption Foundation. SERB repeated the stunt two months later, also spraying Navalny with a foul-smelling chemical.

Despite his history of violence, Beketov was recently a guest at Russia’s State Duma, the lower house of the federal parliament. On April 26, a day before the attack on Navalny last week, Beketov bragged on LiveJournal about visiting the Duma at the “formal request” of unnamed Duma deputies.