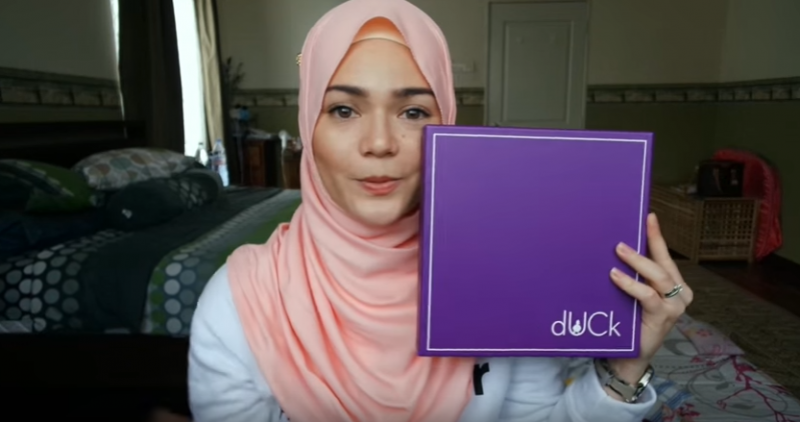 Screenshot from a YouTube tutorial video on how to wear a dUCk scarf.

The limited edition Royal Duck scarf was quickly sold-out after it was introduced by no less than Her Royal Highness Princess Sarah of Brunei. The scarf’s design was praised by many netizens, but some questioned the appropriateness of buying a hijab that costs 190 Brunei dollars (136 US dollars).

The most anticipated photo of all ever appearing on my Instagram feed. I have goosebumps seeing this photo of Her Royal Highness Sarah wearing one of our own. It is truly an honour to have collaborated with her through The Royal dUCk and I think there are no words to express the special feeling in my heart. I have never met her in person, so tomorrow will be the first time I admire her from afar. Your Royal Highness, if you're reading this, thank you for continuously inspiring all of us and thank you for making this a huge milestone for us at dUCk and all dUCkies. We all feel so honoured to see a glimpse of your positive values that are rarely shown, and our admiration grows. And here she is, donning the Peach Royal dUCk. ❤ – D. #duckscarves #scarves #hijab #theroyalduck @srdesign.brunei

It is special because it celebrates and stands for the defining characteristics of what makes every woman truly special.

Whether soft, gentle and warm, or fiercely independent and opinionated, whether a dreamer or an adventurer, a mother or a daughter – whatever we choose, however many roads we travel, our diversity is our strength.

Through its Instagram page, dUCk also highlighted a similar point:

The Royal dUCk is about women. How we should celebrate each other, how we should be kind to each other, and each of the 5 elements that Her Royal Highness Sarah advocates are symbolized in this one dUCk.

The five symbols in the design of the scarf are the wheel, diamonds, bees, flowers, and the grid.

The Royal Duck scarf was widely anticipated in Brunei and its launch was featured by mainstream media and fashion magazines.

Many Brunei netizens were happy about the collaboration between dUCk and their princess.

Some of the new owners of the Royal Duck scarf from Brunei and Malaysia shared their joy on social media. But others noted the high cost of acquiring the stylish hijab.

Rm600 for #theroyalduck? My my my!! i can actually pay fees for my study for 1 semester hahaha

RM is Malaysian Ringgit. RM600 is the equivalent of 190 Brunei dollars.

I believe you should be allowed to buy whatever you want with the money you earn, but we also need to be conscious consumers. Indulging yourself with something expensive once in a while isn’t a crime. We shouldn’t be spending unnecessarily on things that we do not need or just for the sake of owning something just because everyone does.

She also urged netizens to remember the religious teachings connected to wearing the hijab:

The amount of selfies I have seen of people just to show their dUCK scarves is part and partial of what Islam does not encourage: vanity.

While being chic is an aim, many of us have forgotten the concept of humbleness that our Malay and Islamic culture has taught us. So the next time you buy something that is outside your necessity, ask yourself: do I need it? Will my happiness and bank account sustain at this current frame of mind I am in well into a month of me owning this thing?

But a commenter cautioned her against making judgements based on what people post on social media:

In an interview published by a Malaysian newspaper last January, a representative of dUCk clarified that although its products are quite expensive, it does not cater to the luxury market.