The Return of the Butcher of Kabul: What Does It Mean for Peace in Afghanistan? 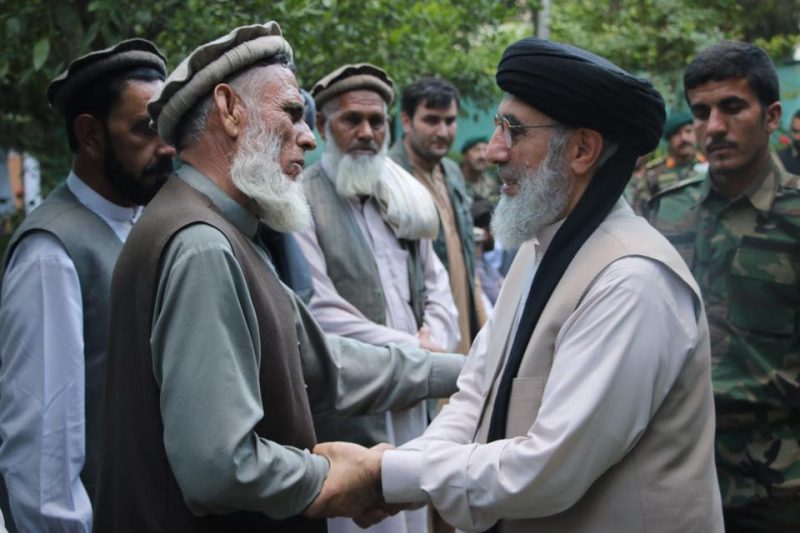 After almost 20 years in exile, the once internationally-wanted militant Gulbuddin Hekmatyar made on April 29 a public re-emergence in Afghanistan as part of a peace deal his faction Hezb-e Islami  signed with the Afghan government last year.

Speaking publicly for the first time since his return to the country, Hekmatyar called on the recalcitrant Taliban to join a “caravan of peace” by laying down their arms and joining the peace process. He was speaking in front of family members, followers and politicians in Laghman province, east of the capital, Kabul.

The controversial deal that has allowed Hekmatyar to return has also seen his name withdrawn from the UN sanction list. The European Union has backed the deal, offeeing millions of dollars in order to implement the agreement with the former warlord and his party.

Hekmatyar says he will forget the past but the families of the 66 thousands Kabul victims will not. #Hekmatyar #Afghanistan pic.twitter.com/osmIRylTSg

The peace deal was a long time in coming, with talks beginning under the administration of ex-President Hamid Karzai, whose friendship with the rebellious Hekmatyar stretched back to the 1990s, when Karzai served as deputy foreign minister in Afghanistan's transitional government.

But to many, Hekmatyar epitomizes the worst of Afghanistan's warlordism. He gained his moniker “the butcher of Kabul” for his bombardment of civilians in the capital during the civil war that eventually brought the Taliban to power in 1996.

#Kabul will never forget and forgive what this bloodthirsty criminal and terrorist did to it! #Hekmatyar #Afghanistan pic.twitter.com/eoW32omtRc

Hekmatyar was also nothing if not a turncoat. He fled Kabul when his opponents Taliban took over, but after the 2001 US-led invasion of the country, he collaborated with the group and with Al Qaeda, even claiming to have helped Osama bin Laden escape from Tora Bora.

While the Afghan High Peace Council (HPC) and both the US and EU agree that the deal struck with the influential Hekmatyar is a “step forward toward peace”, others fear his return will mark the beginning of an uncertain and dangerous period, not least for women and ethnic minorities.

In 2013, for example, Hekmatyar openly threatened the minority Hazara community in a bigoted Eid-ul-Fitr address:

The time will come when the oppressed people of Afghanistan will stand for taking their usurped rights and then the Hazaras will have no safe havens in any corner of the country.

Global Voices spoke with Dr. Akram Gizabi, a former journalist of Voice of America, well-regarded writer and Afghan political activist about the possible implications of the peace agreement and Hekmatyar's return to the political fold.

Global Voices (GV): According to the Afghan government this peace deal is “the first qualified success in peace efforts between the government and insurgents”. In what way could this deal bring peace in the country?

Akram Gizabi (AG): In my opinion this is not a success at all, we have to consider that Hezb-e Islami was not fighting the government actively so making a peace deal with that party will not reduce the fighting or the level of violence. This is not a success but a failure. Hezb-e Islami was one of the main parties involved in the bombing of Kabul (during the civil war) in which more than 60,000 people died. The whole city was levelled to the ground. Hezb-e Islami and its leader should be tried in front of an International court of law for the crimes that they committed against the people of Afghanistan.

GV: Many members of Hezb-e Islami are already present in the highest institutions of the country while other members are fighting against these same institutions. Hezb-e Islami will gain much more power through this deal. Could the group endanger the achievements made by Afghanistan in recent years?

AG: Yes, there is danger because Hezb-e Islami does not believe in elections. I have heard its leaders saying a lot of times that elections will bring the wrong people to power or people who are not really Muslims to power and all the successes that have been achieved in terms of children's rights, women's rights and human rights in general will be suppressed or undermined. Besides, Hezb-e Islami doesn’t believe in the civil society or in civil activities because the party itself believes in a dictatorial style of rule.

GV: According to some observers this deal will weaken the Taliban, or at least will push them to the negotiating table. What do you think about that idea?

AG: The Taliban doesn’t believe in any peace deal with this government because at this moment a lot of areas in Afghanistan are under their control anyway, and even if they would like to talk they want a better deal than Hezb-e Islami got. So that’s why they are not taking part in this agreement. Besides, the Taliban are not working on their own. They are mostly under the influence of Pakistan. If Pakistan feels that the Taliban should take part in negotiations they will take part. If Pakistan does not allow them, the Taliban cannot do that. If you remember most of the talks in the past that were arranged, Pakistan was involved in them. And if they don’t have the green light from Pakistan they will not do it. It is strange also that Hezb-e Islami is one of the parties that is most influenced by Pakistan and the fact that it’s taking part in this agreement with government also raises questions. On one hand Pakistan doesn’t allow the Taliban to take part and on the other hand it allows Hezb-e Islami to take part, so it is a very complex game that they play.

GV: In a recent interview by Al Jazeera, Hezb-e Islami chief negotiator Mohammad Amin Karim claimed that, “when Hezb-e Islami comes, a huge number of Afghan people will ask us to put pressure on TV channels not to show programmes with women in them. This is [what] 99% of Afghan people [want]. The microcosm of Kabul is only 1%.” Could Hekmatyar's return significantly reverse progress made in women's rights in Afghanistan?

AG: Absolutely, Hezb-e Islami would suppress all the rights of women in the country, it will suppress the freedom of press, the media, the civil society […] freedom of movement even would be curtailed so it’s a setback. We [could] go back probably to the times of Taliban because they are more or less two sides of the same coin. They have some differences but in their archaic thinking in terms of running a society they are more or less the same.

AG: Partly because most of those people who are involved in war crimes are in power. That is internally. Externally, foreign forces, foreign powers, coalitions, NATO all came to Afghanistan but didn’t work for justice. They just wanted to have a peace according to them, and stability, but peace and stability at the price of justice is not a real peace. Most of these people who are [currently] in power with the support of foreign governments are downright criminals. And [foreign powers] let them be. They passed a law in the Parliament [guaranteeing] that they will not prosecute any of these people for any crimes.

Hekmatyar is one example. He has come to Kabul with a green light from the big powers. If they didn’t want him to come, the government could not have signed that deal because they would have blocked it. At the moment I don’t see any hope for any kind of reconciliation or justice. I’ll give you some examples: one of the [other] butchers, called Asadullah Sarwari, who personally tortured people to death at times, was released from prison just a few months ago. The other one was Faryadi Sarwar Zardad, one of the commanders of Hezb-e Islami, who was imprisoned in Britain and then released. He came to Afghanistan and received the hero’s welcome from supporters of Hezb-e Islami.

But this person did some horrible things. He had a man called “dog” — he was a man but whenever he wanted to torture somebody he would release this guy. He'd say, “bring the dog” and the “dog” would bite people. He has taken hostages, killed, raped, all kind of things, and he comes here and walks free in Afghan society. He was put in prison in England for various crimes, but in Afghanistan he is still a wanted man, he is a criminal and yet he walks free. The third [example] is Gulbuddin Hekmatyar himself. He fired day and night rockets into Kabul; some estimates say more than 70,000 rockets were fired at Kabul indiscriminately. They didn’t hit any military targets, they just destroyed the whole city. But all these crimes have been washed away — they took his name and the name of his fighters off the UN sanctions list. Besides, according to that deal, Hezb-e Islami fighters are pardoned. Some 2,000 people have been released from prison, but only 500 of them were HI members, the other 1,500 were Taliban that claimed to be HI fighters in order to be released!

Akram Gizabi is a writer, political activist and former journalist of Voice of America (VOA) based in the United States. In 2005 he founded a political party in Afghanistan called NOMA (Civil Movement of Afghanistan) advocating civil rights, democratic values, secularism and empowerment of women and minorities. He also established a non-profit drug rehabilitation center called Camp-e-Madar, Mother Camp. He tweets @AGizab.