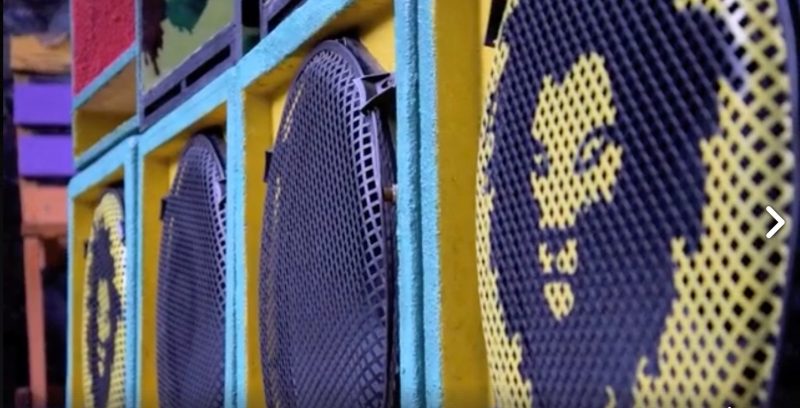 Screengrab from a promotional video for the Dub Club, taken from its Facebook page.

Jamaica's capital has what some consider to be an unfair reputation as a dangerous and crime-ridden city — but as a UNESCO-endorsed Creative City of Music, Kingston is starting to raise its profile as a cultural hub. The city's new mayor, Delroy Williams, is particularly engaged with this concept, as part of his vision positioning Kingston as a major tourist destination.

A recent law enforcement incident, however, highlighted the challenges Kingston may face as a music mecca due to the Noise Abatement Act of 1997, which has been the topic of ongoing political consultations for at least the past two years.

Just as Kingston's successful Carnival event was winding down on the evening of April 23, a small drama was taking place on the other side of town. The Kingston Dub Club, a Sunday night fixture that has grown in popularity with locals and visitors, was raided by the police at around 11 pm as the gathering celebrated the 51st anniversary of Emperor Haile Selassie's visit to Jamaica. The police were reportedly responding to a noise complaint from neighbours in what is largely an upscale residential area. They shut down the venue, but not before allegedly pepper-spraying and arresting the owner after asking for his police permit, which he was unable to produce.

Perched on a steep hillside with stunning views of the city, the Dub Club offers a unique mix of “100% Undiluted ROOTS/ROCKERS/REGGAE & DUB every Sunday Night” and attracts a wide-ranging clientele, including more well-heeled Kingstonians and music-loving tourists, as well as international guest artists and DJs. A local member of Kingston's arts scene shared this video:

Another fan raved on Facebook about his Dub Club experience:

Shared this amazing raw vegan spread last night at Kingston Dub Club with four amazing people last night after practicing yoga with Jamaicans travellers of all races and mixes and backgrounds while listening to the uplifting and positive sounds of Jamaican reggae and all this with the most amazing view of Kingston and beyond over and over I heard give thanks .. give thanks … just the reminder my culture is not the box some make it to be its bigger than that and even though there many factors at work one day it will break away from the hate people spread #givethanks #myjamaica #clean #food #ackee #callaloo #plantain #organicsalad #body #heart #spirit

Music fans on social media were distressed by the news of the police intervention:

Dub Club is the best run, most culturally relevant, holistic musical tourist enterprise In Jamaica. There's no excuse for what happened.

Owner of the popular event ‘Dub Club’ alleged to have been pepper sprayed and tazed despite having a permit for th… https://t.co/V85SIUlAPO pic.twitter.com/wbFHiv8arG

If he has a permit… he still has it even if it is not in hand.
He just has to produce it at some point. BASIC LAW.
It is a shame … and a double standard.
Hope they win de case.
To actually arrest someone on Carnival sunday for a noise complaint is kinda hypocritical.
Warning = fine… whatever.
Arrest = NO SAH…. NOT COOL!
#DubClub
#jamaika

He subsequently sent a tweet suggesting that the permit application process was inadequate:

There are flaws within the system but in the interest of development we must work together to make it better. #AllStakeHolders #StillBelieve pic.twitter.com/udArEaKv7G

Dub Club thereafter presented the mayor with a T shirt:

#KingstonDubClub No single instance will destroy the relationship between the city, the law and Mr Lee. He is with the vision. #Kingston145 pic.twitter.com/aFax9SwDyO

Mayor Williams, who has an energetic presence and a growing following on Twitter, even complimented the club owner for his use of solar power, while expressing concern over the security aspects of the raid:

Commendable that Mr Lee (Gabre Selassie) also takes some pressure off the city grid. Headed back there on Sunday for the experience #DubClub pic.twitter.com/LAUFJa6cgG

The KSAMC has a duty to ensure the safety of patrons at events. The council will meet and decide how best to ensure this never occurs again.

Culture Minister Olivia Grange also responded swiftly, describing the Dub Club's owner as an icon who has unfailingly promoted roots reggae music, and saying he “deserves recognition for his consistent support of our indigenous Jamaican culture”:

I want to quickly express my concern and regret that an incident like this should have happened on a day when carnival, a quite different cultural event, was taking place. It is really unfortunate that something like this happened at the same time as carnival, as it sends the wrong message that there are two Jamaicas.

However, the issue of noise remains on the table. Jamaican music events and dances — whatever the genre of music — customarily begin and end late, creating problems for neighbours who would much prefer a quiet night. Coincidentally, April 26 — just three days after the raid — was International Noise Awareness Day. Journalist Fae Ellington reported on one government minister's observations on the issue:

The Dub Club issue was peacefully resolved, with no hard feelings on either side and assurances of cooperation and goodwill in the future. But are the neighbours happy? By all accounts, they are certainly not. While government officials weigh up the pros and cons, they are finding that the issue of noise in the city is a delicate balancing act.