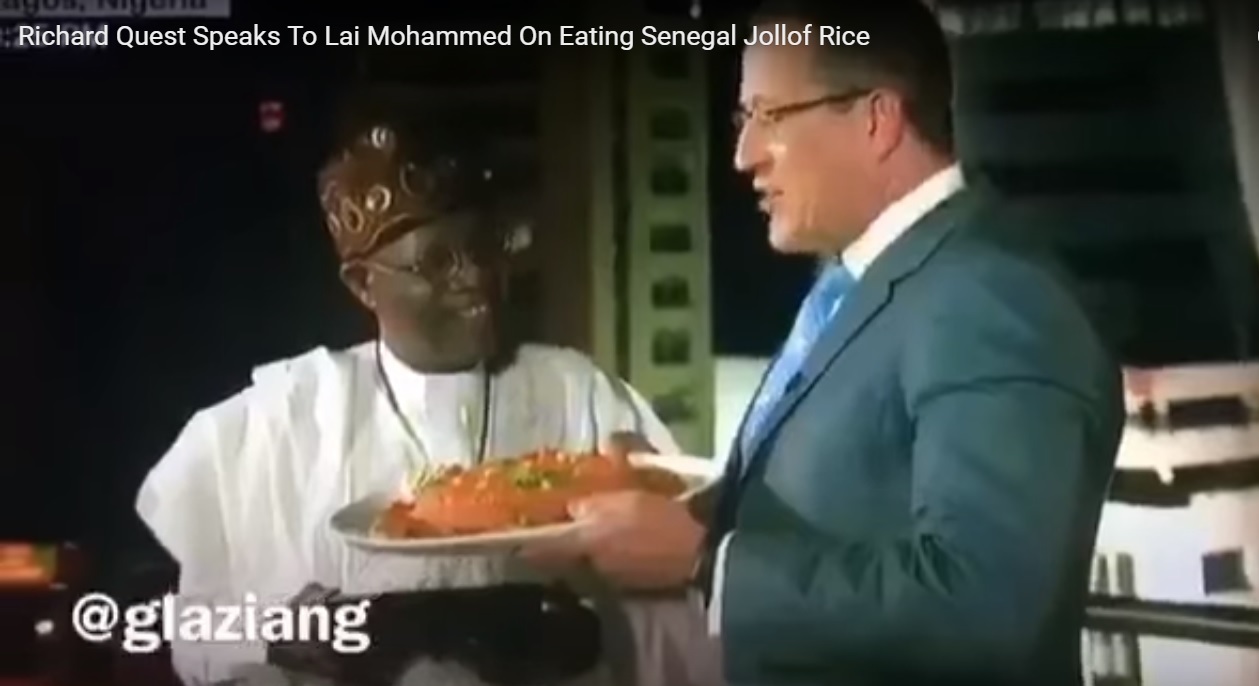 Nigerians are irked with their Minister of Information and Culture, Lai Mohammed, for daring to attribute superiority to Senegal's jollof rice over Nigeria's own version of the widely consumed dish. Mr Mohammed triggered national outrage when responding to questions from CNN's Richard Quest, who is currently visiting Nigeria.

Busy filming around Lagos today. I'll be tweeting my early thoughts on being back in Nigeria after 10 years away… #RichardQuestinNigeria pic.twitter.com/os18gVa112

Jollof is a rice dish popular in West Africa – specifically in Nigeria, Ghana, Senegal and the Gambia. World jollof rice day is commemorated on August 22. Recipes for Jollof rice differ. Here is how to make Nigeria's jollof rice.

There has been a running battle between Nigerians and their Ghanaian neighbours over who makes the best jollof.

Quest first tested the waters on the Jollof debate with a provocative tweet:

Jollof Rice. Delicious. Ghana or Nigeria? Which is best? I ain't getting involved in the #jollofwar #richardquestinnigeria

As though that were not enough, he then asked for the Nigerian Information and Culture minister's view:

Nigeria's ThisDay newspapers captured the shock of Nigerians over their minister's response:

Minister of information and Culture, Alhaji Lai Mohammed stunned CNN audience yesterday when he said the best Jollof rice is prepared in Senegal. A claim that seriously weakened the ‘Nigeria First’ mantra meant to encourage patronage Nigerian goods and drive the nation’s economic recovery on a special edition of Quest Means Business anchored in Lagos. Although Mr Richard Quest was later to clarify that the Minister misunderstood his question to mean which country jollof rice originated from. “That was why he answered Senegal.” However, the damage was already done, as social media would not let Lai Mohammed off the hook over his faux pas.

Quest clarified the response from the minister thus:

To be clear. The Minister misheard he thought I asked, who first created jollof rice – hence his (correct) answer Senegal.

Despite the clarification, Nigerians were not willing to lose sight of what they considered a betrayal of their national pride.

A Nigerian that doesn't know that Nigerian jollof rice is the “kabiyesi” of jollof worldwide, is that one a Nigerian? #ministeryoumissroad

Does it mean Lie Mohammed cannot say the truth for once?
Even on jollof rice, he had to lie
Why is he like this? pic.twitter.com/zC4xfjaQD2

When world war 3 was predicted, who knew it would be Jollof wars?

So this man had the effuntry to denounce Nigeria as jollof rice founders… Issokay! #WehdoneSir

Some concluded that Mr Mohammad's comments amounted to conceding defeat in the jollof rice war:

And that's how we lost the Jollof war, Lai Mohammed !!! Why?

And others went as far as saying that the minister should be sacked:

This is Lai Mohammed's worst. We can't take this anylonger. He should be fired and exiled. Oh… My beloved jollof rice

According to John, the presidency should debunk the ministers statement as “malicious and totally unpatriotic”

The presidency need to put out a statement debunking Lai Mohammed's comments as unfounded, malicious, nefarious and totally unpatriotic.

But at least one Twitter user claimed that Nigeria had already claimed victory in an earlier Jollof battle.

Dear Lai Mohammed, this is Jennifer Fong of Facebook speaking about Jollof as it should be. pic.twitter.com/vRkIRhlHS0