A Royal Misdemeanour Makes for a Heated Discussion in Nigeria 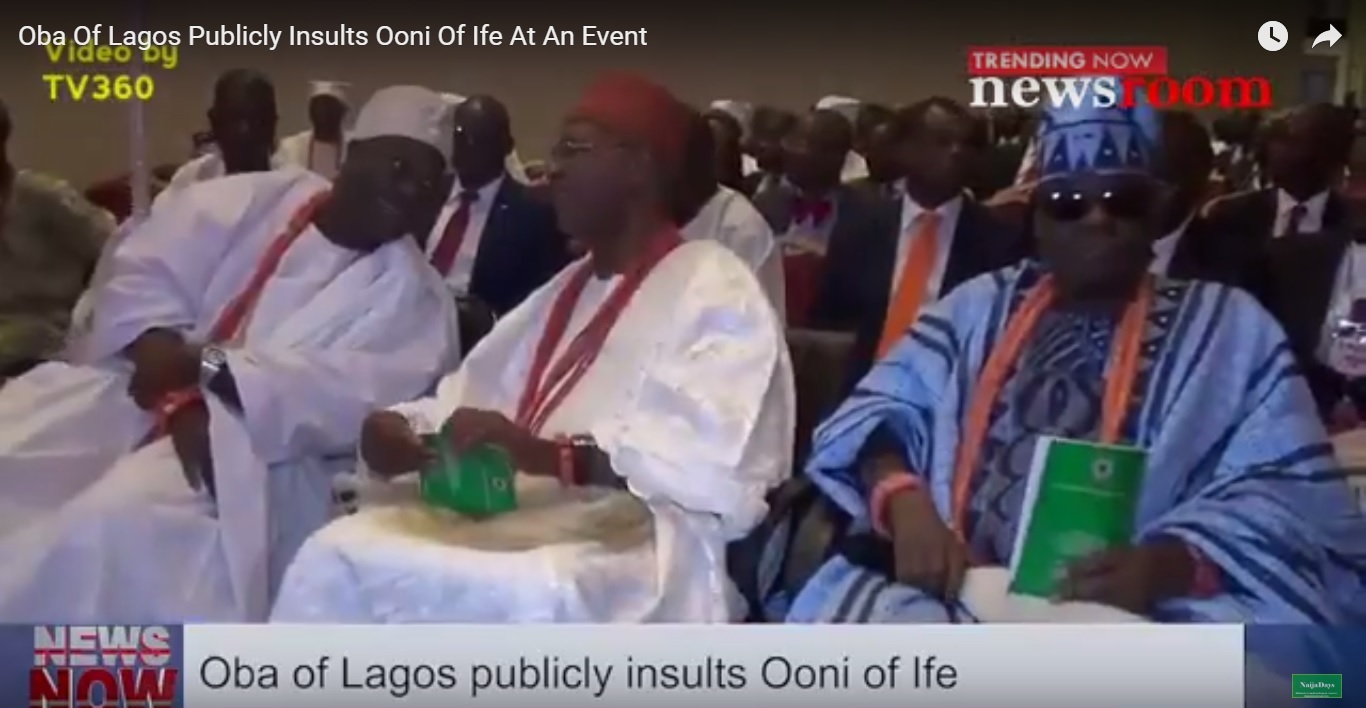 Recently, the Chartered Institute of Bankers of Nigeria (CIBN) hosted the 22nd edition of the World Conference of Banking Institutes in Lagos, Nigeria.  However, the news about the event by CIBN got obfuscated due to a royal snub that occurred at the conference's opening ceremony. The Oba of Lagos, His Royal Majesty, Oba Rilwan Aremu Akiolu ‘snubbed’ another monarch, His Imperial Majesty, Oba Adeyeye Enitan Ogunwusi, the Ooni of Ife.

Nigeria runs a federal democracy constituting of 36 states and many local government areas. However, the country also hosts strong traditional states that had held sway before the advent of colonial governance. These traditional monarchs no longer exercise any political power, but are nonetheless,very influential in their respective domains. Their impact varies from keeping peace within their respective realms to settling disputes through the traditional system of governance. The first class traditional monarchs, also exercise some considerable clout in contemporary Nigerian politics. They are also usually sought after by politicians and/or governments in order to reach out to the citizens at the grassroots level.

Oba of Lagos publicly insults the Ooni of Ife at an event In lagos . Video Credt: TV360Nigeria pic.twitter.com/cFzwq4qGVq

In the video above, the Ooni of Ife, after exchanging pleasantries with His Majesty, Igwe Nnaemeka Achebe, the Obi of Onitsha, went over to greet the Oba of Lagos who rudely cut short the Ooni.

This set Nigerian netizen talking because “deep respect for leaders is a pillar of the culture of the Yoruba people, one of Nigeria's biggest ethnic groups…”

Nigerian writer, Molora Wood was full of praises for the Ooni of Ife:

I even love the Ooni of Ife more after the snub meted out to him by the uppity head of a tiny chiefdom. Oba Akiolu of Lagos played himself.

Olamide Abe commended the Ooni for being calm in the face of provocation:

I have to commend Ooni Of Ife for being calm in the face of Provocation. Age does not define maturity.
If it's… https://t.co/j18A0Xgl1b

Wale suggested the Oba of Lagos to learn from former President Olusegun Obasanjo, who though older than the Ooni, respected the seat of the young Oba by prostrating himself while greeting:

Obasanjo prostrating for the Ooni of Ife. As it should be. pic.twitter.com/gbQZp9RCjQ

But some netizens added humour to the controversy:

When an Igbo man like me want to put mouth in Oba of Lagos vs Ooni of Ife matter but remembers i live in Lagos and Lagoon still dey pic.twitter.com/pUnuhdVpZJ

The Oba of Lagos, is no newcomer to controversies. In April 2015, his threat that people who did not vote his way shall “perish inside water” generated a considerable ruckus in the country.

Nonetheless, the Ooni has reiterated his respect for his brother monarch. He said that he “still holds Oba Akiolu in high esteem and what happened yesterday will not stop the Ooni from holding him in high esteem.”

However, the Oba of Lagos has refuted the allegation that he snubbed the Ooni. Rather, Oba Akiolu clarified that he was prevented by the custom of Lagos to embrace the Ooni. According to Oba Akiolu: “anybody can imagine anything. There was nothing. The custom or tradition is like that in Lagos. We don’t hold each other; we don’t hug.”

Nonetheless, Insider Source alleges that Oba Akiolu's reaction may be connected to a rift with the Ooni of Ife:

…the whole issue started when the Ooni placed a call to Oba Akiolu, informing him about his invitation to the Commonwealth. But the Oba of Lagos got angry that he wasn’t invited for the event, and he requested that the Ooni boycotted the trip, a request that the Ooni did not honour. The Ooni duly attended the Commonwealth Day celebrations in London, presented a speech, laid a wreath and graced many other events during the trip. Since the Ooni returned from London, the Bankers’ event of Tuesday, April 25 was the first time both were meeting.